Standing Rock and the Struggle Ahead

The indigenous movement is integral to the future of the planet and a winning left. 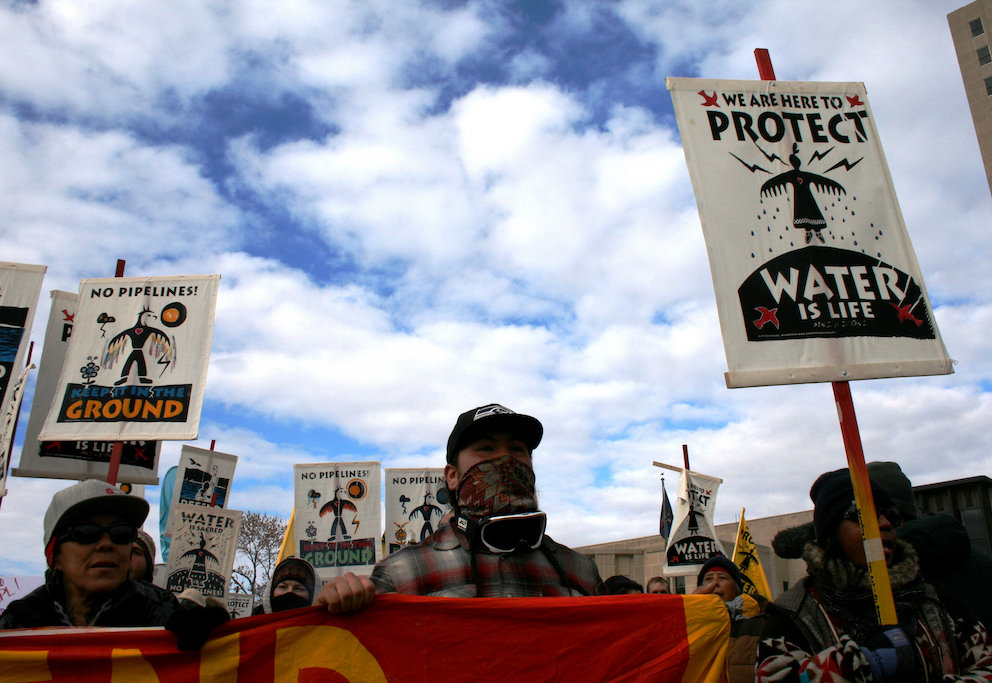 14 Feb 2017 – Last week, following President Donald Trump’s executive memo, the Army Corps of Engineers granted Dakota Access an easement to drill under the Missouri River just north of the Standing Rock Sioux reservation in North Dakota. For months, Standing Rock has led a coalition in vehement opposition to the proposed pipeline, which crosses lands promised to the Great Sioux Nation under the Fort Laramie Treaty of 1851. The pipe has already desecrated the graves of Standing Rock ancestors and now threatens the community’s water supply.

The first few weeks of Trump’s presidency have brought the injustices of racism, capitalism, and patriarchy long festering beneath the surface of American society out into the open, and placed them on center stage. Trump’s Standing Rock decision forces us to confront another foundational injustice, one rarely if ever discussed in contemporary politics: colonialism.

For many, it is contentious and even offensive to suggest that colonialism endures in the present. In the American popular imagination, colonialism ended either when the thirteen colonies declared independence from Britain in 1776, or when the frontier closed and open warfare against indigenous nations ceased following the massacre of more than three hundred Lakota at Wounded Knee in 1890. Colonialism, according to these narratives, is Ancient History.

But ongoing colonialism is the central injustice that the indigenous movement resists and seeks to change. As indigenous poet and activist Bobbi Sykes once quipped, “What? Postcolonial? Have they left yet?”

If the Left is to understand and stand in solidarity with Standing Rock and the indigenous movement, it must take colonialism seriously.

Wiping out any trace of indigenous peoples allows the continent’s settlers to push forward without any moral reckoning, and without a thought or word about recognition, reparations, or repatriation. It enables the proliferation of myths, dreams, and even utopias predicated on fantasies of free land without a prior and rightful guardian.

It explains why Dakota Access was rerouted from upstream of Bismarck south to Standing Rock. It explains how a $3.8 billion pipe, which costs nearly $1 billion more than the entire budget of the Bureau of Indian Affairs, can be drilled through an indigenous community against their will before basic infrastructure like homes, schools, and hospitals are built. It explains how, after months of unprecedented protests and visibility, Trump can claim that he received no complaints about the pipeline.

The Dakota Access pipeline will enrich Dallas billionaire CEO Kelcy Warren, who is already worth $4.2 billion. The few jobs the pipeline will create will not flow to the indigenous community, who — particularly on reservations like Standing Rock — will remain unemployed and locked out of the labor market.

It is impossible to describe the totality of this picture — of acute land theft, poverty, oppression, surveillance, policing, and extraction — as anything other than colonialism.

This explosive truth can lead even the most radical thinkers to fatalism. Confined to the past, American colonization of indigenous people appears inevitable if regrettable. Brought into the present, colonialism seems irreversible. Algerian-style liberation is neither possible nor desirable. Americans are never leaving, nor should they. This has become their home too.

We stand for something that is undeniably right: water that sustains life and land that gave birth to people. The stubborn unwillingness to stop fighting for what is right, to just go away, is our tradition.

The indigenous movement very nearly defeated the Dakota Access pipeline. The Obama administration, after months of unrelenting pressure, halted the pipeline and ordered an Environmental Impact Statement. Trump’s memo overrode this partial victory, rescuing his oil baron cronies and their investors from further delays and losses.

With the election of Donald Trump, there was not much more that could have been done. In order to reroute or stop Dakota Access, Standing Rock needed Hillary Clinton, or even better, Bernie Sanders, to win the presidency. It was the Democratic Party leadership, not the indigenous movement, who failed.

Meanwhile, North Dakota legislators have introduced a bill calling on Congress to amend the Constitution to shift Indian reservations from federal to state jurisdiction. Lawmakers will likely drop the legislation once they realize how much it would actually cost.

More concerning, however, is a plan brewing among Trump’s advisers to privatize Indian reservations, which comprise 2 percent of the United States’ landmass but hold up to a fifth of the nation’s oil, natural gas, and coal reserves. The plan would upend over a century of federal Indian policy by converting sovereign Indian land, which is often regulated and held in trust by the federal government, into private property. If the plan is implemented as part of Trump’s oil and infrastructure agenda, it would bring more fracking rigs, pipelines, and protests to America’s colonial frontier on Indian Country’s doorstep.

The indigenous movement will be fighting a battle on two fronts: not only against pipelines but also against a full-frontal assault on indigenous rights and sovereignty. They’ll need plenty of solidarity to counter this renewed wave of colonial extraction and repression.

We have seen the promise of a more just future for the first people of this land and all who share it with us. Let’s fight for it.

Julian Brave NoiseCat is an enrolled member of the Canim Lake Band Tsq’escen in British Columbia and a graduate of Columbia University and the University of Oxford.