The Brazilian Hangover: When the Party Ends

It is unlikely that Brazil will be able to pursue a prominent role in the international arena before 2019. 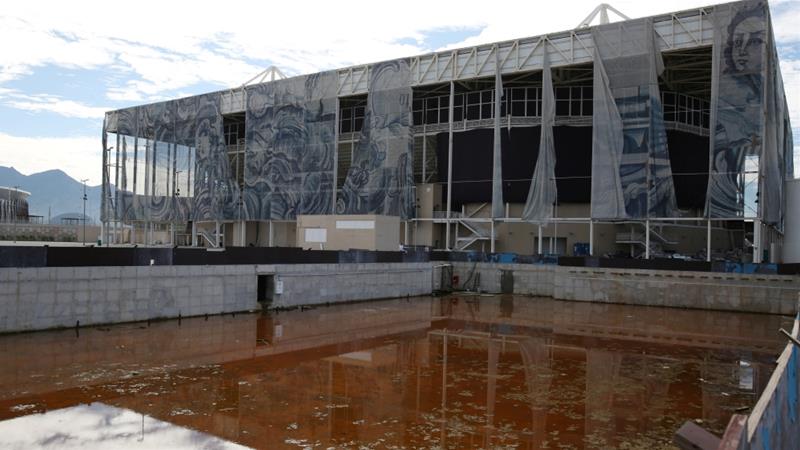 A view of the Olympic Aquatics Stadium, which was used for the Rio 2016 Olympic Games, is seen in Rio de Janeiro on February 5. [Pilar Olivares/Reuters]

21 Feb 2017 – In a world inevitably multilateral such as ours, regional powers are supposed to have their share of responsibilities in order to build more plural paths towards a fairer and more peaceful international political environment.

Therefore, Brazil is expected to have a significant role in international politics. However, the crisis that the country is currently going through structurally prevents it from fulfilling this expectation.

Brazil is melting down, to put it softly. A euphemistic image is that the country is waking up after a huge party, with a terrible hangover, and now has to face a very hard reality.

In fact, looking at Rio de Janeiro, the former host of the Olympic Games, the metaphor is indeed reality.

Unsurprisingly, Rio is the epitome of the Brazilian tragedy. Until recently, both Brazil and Rio were in the spotlight of the international stage, receiving a lot of attention and investments.

However, turning this promising situation into a sustainable reality was simply crushed when the real party that the country was enjoying ended. Brazil was enjoying a boom in its exports of commodities thanks to the high demand in China. As soon as the Chinese demand decreased, the impact was rapidly felt.

The situation in Rio is tragic. Since the state’s economy is highly dependent on oil sales, the decrease of oil prices internationally, and alleged cases of corruption, have led to a precarious financial situation.

This resulted in a negative outlook in several areas – ranging from the state’s struggle to pay the wages and pensions of its public employees, to its crumbling health and security sectors.

It is not a coincidence that Rio’s acting Governor Francisco Dornelles declared a state of calamity in June 2016. In the political sphere, the picture is not any better. Last November, for example, Rio observed two of its major politicians, Sergio Cabral and Anthony Garotinho, both former governors, being arrested.

This is definitely a microcosm of the crisis in Brazil. The country is in a dire economic situation. During the commodities boom, Brazil missed the opportunity to make structural modifications in its economy and become less dependent on commodities’ price fluctuation.

OPINION: The fight for Brazil’s future

Inversely, the country experienced, for instance, the deterioration of its manufacturing sector. Now, it struggles to produce a sustainable economic growth and generate enough jobs, which consequently stresses its public deficit.

In this situation, following Rio de Janeiro, two other states of the federation also declared a state of financial public calamity – Minas Gerais and Rio Grande do Sul.

Therefore, three of the four largest state economies of Brazil are unequivocally broke. Even Espirito Santo, a state often praised as a financial example, is under a significant security crisis, owing to a strike of police officers demanding better salaries. The consequences of the strike claimed at least 144 lives.

Notwithstanding, a pivotal dimension of the Brazilian crisis is the political sphere, which is in severe turmoil.

In recent months, for instance, the country witnessed the impeachment of President Dilma Rousseff and the arrest of the former Lower House Speaker in Congress, Eduardo Cunha.

On the top of all this, once more Brazil is under a neoliberal restructuring in order to overcome the crisis, which is the equivalent of stepping forward when reaching the edge of a cliff.

Consequently, with its core pillars collapsed, it is illusory to expect Brazil to have a major influence on the international stage.

In fact, for quite some time already, one can observe precisely the opposite – the retreat of Brazil’s global ambitions.

This is clearly noticeable by simply observing the financial structure of its diplomacy-making. For instance, the country has been decreasing its budget allocated to its Ministry of Foreign Affairs.

Hence, Brazil is not only recruiting fewer diplomats, but also discussing the closure of several embassies and consulates around the world, mainly in Africa and in the Caribbean.

The recent constitutional amendment, blocking federal state budget increases for two decades, undoubtedly ensures that this trend is not ephemeral.

Most importantly, it should be noted that a fundamental drive of Brazil’s diplomacy is its president. Therefore, any turbulence in the president’s office – or merely having someone that simply has no inclination to pursue proactive international policy-making, such as former President Rousseff – directly affects Brazil’s positioning in the world.

Therefore, it is not difficult to understand that a president who takes office through an impeachment process – like President Michel Temer did – is far from being in a solid position to perform presidential diplomacy with a global perspective.

On the contrary, the constant necessity of simply managing his political position domestically – as a consequence of a very disputed and polarising impeachment process – apprehends much more of his attention and concerns than any international aspiration.

Consequently, a country that was once able to pursue a very proactive foreign policy – for instance, brokering, alongside Turkey, a nuclear deal with Iran, or fostering a polycentric world with BRICS countries, engaged in the conception of an alternative international financial architecture with the creation of the New Development Bank – is now unable to deal effectively with pressing crises in its neighbourhood, such as the one in Venezuela or in Haiti.

It is hardly believable that Brazil is going to recreate the necessary circumstances to pursue a prominent role in the international arena before having a new president in 2019.

Only someone assuming the presidential office directly through the popular vote can possibly ease political tensions in Brasilia, bring some predictability to the economy and, by its turn, set the conditions to project Brazil’s international influence.

Until then, unfortunately for the whole world, Brazil will simply remain adrift in the turbulent waters that are in the horizon of international politics.

Ramon Blanco is a researcher and professor of international relations at the Federal University of Latin-American Integration (Brazil).