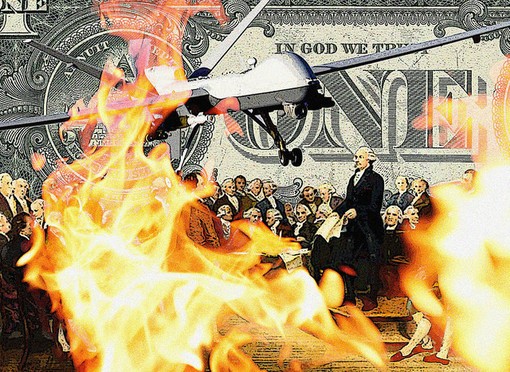 17 Feb 2017 – Modern warfare is both extremely personal and robotically impersonal. The psychological and emotional intensity of a firefight in a jungle or urban war zone is contrasted with the carpet bombing of a city from bombers more than a half mile above the target or an armed drone piloted by a human at a computer a half world away. Of course, this is mostly the perspective of the invading or occupying military. The civilians in the jungle, city, town or village under attack know only the most personal aspect—the blood, the maiming, the loss of shelter and stability, and the death of loved ones. The guerrilla fighter against the invader experiences something akin to their civilian counterpart, but at the least displays some kind of hope by the fact of fighting back.

Meanwhile, those who profit from the warfare go about the business of developing ever more murderous weaponry often designed to create even more distance between the killer and the killed; the general and the soldier. The citizens of the nation to whom the invaders belong intentionally and naively go about their business as if their tax dollars had no connection to the mayhem and murder being carried out in their name.

It is this contrast I contemplated while reading two recently published books: Debriefing the President: The Interrogation of Saddam Hussein by John Nixon and The Drone Memos: Targeted Killing, Secrecy and the Law, edited by Jameel Jaffer. The former, by a retired CIA analyst who was the first US functionary to question Saddam Hussein in depth after he was captured, is both a revealing look at a very personal series of interactions between a civilian member of the US war on the world and a profile of the longtime president of Iraq. As the narrative unfolds, it becomes clear exactly how misinformed the Bush administration, the Pentagon, and the CIA were not only regarding the presence of WMDs in Iraq, but also about the psychology and personality of Saddam Hussein. Nixon comments that this was in large part due to the political influence of the neocons in the US government, but also related to George W. Bush’s personal distaste for Hussein and a possible need to prove his worth to his father and those around him. 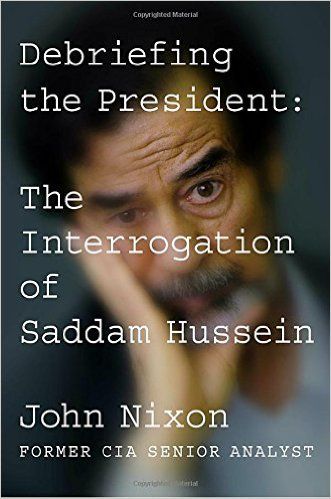 Perhaps the most humane aspect of this book is the author’s growing respect for Saddam Hussein the man. As Nixon’s reporting progresses, it becomes clear that his opinion of Hussein changes from one that considered him a murderous scoundrel to one that begrudgingly acknowledged Hussein’s patriotism and sense of honor to his tribe, his mentors and his country. In the process, listening to Hussein’s version of his nation’s history under Hussein’s rule causes Nixon to challenge the narrative of his agency and his government. In doing so, it is revealed how the similarities between the two governments (Bush’s and Hussein’s) were greater than that imagined by the warmakers and the supplicant US media.

Don’t get me wrong, John Nixon never questioned that Hussein was a war criminal and deserving of his fate. Nor did he question his role in the drive to war on Iraq. He describes the Clinton administration in less than laudatory terms, in large part because it did not seem to consider all-out war in the Middle East to be a reasonable foreign policy move. Nixon remains a defender of the imperial polices of the United States and has differences only with how that policy is carried out. In other words, he was a good soldier who believed in the CIA and what he did for the agency. His book describes a deeply personal aspect of war that is rarely revealed. In other words, by describing his conversations and desire to understand the subject of this interrogation (and a target of the invaders) the text humanizes both the interrogator/warrior and the president/dictator, reminding the reader of their common humanity and the reality of war, which renders that humanity irrelevant.

It is this irrelevance that is the essence of the targeted killing program of the United States. Although the practice originated in modern times more or less with the state of Israel, it is the United States during the reign of Barack Obama that has refined it. Thanks to technological advances in the development of airborne drones and the computer guidance systems designed to send armed drones to their targets, the impersonal nature of war has made it possible to leave intentional randomness of previous versions of aerial bombardment behind when desired. Furthermore, it has made the killing of certain individuals suspected of criminal acts possible without any personal interaction with the targeted individuals. In essence, these killings are illegal. However, in the tradition of attorneys who defended slavery or those that helped create the transportation and extermination plans to rid Nazi Germany of Jewish residents, the United States has found attorneys willing to twist the US constitution and international law to justify their murders.

This is the essence of the second book mentioned above, The Drone Memos. The book is a collection of documents (with the obligatory black redaction lines through some of the text) from the Obama White House, the US Department of State, the Department of Homeland Security, and various legal counselors in the US bureaucracy. The documents in this book are the definition of the legal banality of evil. Its saving grace is the excellent discussion of the documents’ content, and the process gone through to procure them by the American Civil Liberties Union. This introduction by former Deputy Director of the ACLU Jameel Jaffer, lays bare the abuse of power targeted killing requires and the consequent growth of executive power in the US government. Indeed, the book itself goes far in explaining how we arrived at our current situation of permanent war.

Together, these texts provide a chilling look at the pervasiveness of that war and its psychology. Neither the interrogator Nixon nor the authors of the drone memos seem to have any serious moral qualms about the nature of their enterprise. At times it seems they believe their sense of moral certainty as to the crimes they are involved in is absolution by itself. Because no one else will judge them, they judge themselves and find no crimes. When a climate of criminality such as this is the norm, then all of us are to blame unless and until we stop it.

Ron Jacobs is the author of Daydream Sunset: Sixties Counterculture in the Seventies published by CounterPunch Books. His latest offering is a pamphlet titled Capitalism: Is the Problem.  He lives in Vermont and can be reached at: ronj1955@gmail.com.