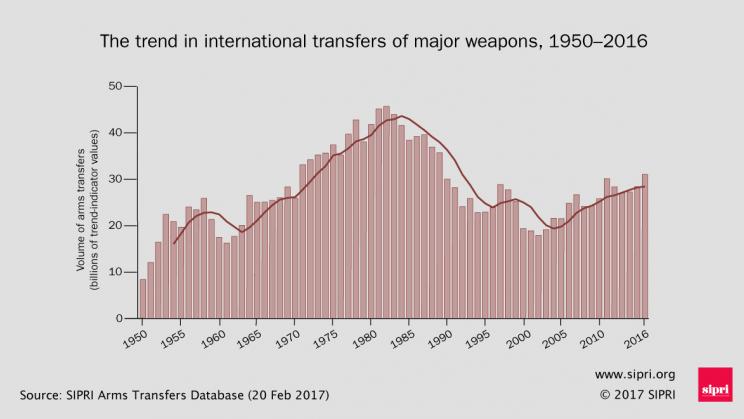 The trend in international transfers of major weapons, 1950—2016. Data and graphic: SIPRI

The flow of arms increased to Asia and Oceania and the Middle East between 2007–11 and 2012–16, while there was a decrease in the flow to Europe, the Americas and Africa. The five biggest exporters—the United States, Russia, China, France and Germany—together accounted for 74 per cent of the total volume of arms exports.

Asia: major increases for some states

‘With no regional arms control instruments in place, states in Asia continue to expand their arsenals’, said Siemon Wezeman, Senior Researcher with the SIPRI Arms and Military Expenditure Programme. ‘While China is increasingly able to substitute arms imports with indigenous products, India remains dependent on weapons technology from many willing suppliers, including Russia, the USA, European states, Israel and South Korea’.

Saudi Arabia was the world’s second largest arms importer in 2012-16, with an increase of 212 per cent compared with 2007–11. Arms imports by Qatar went up by 245 per cent. Although at lower rates, the majority of other states in the region also increased arms imports. ‘Over the past five years, most states in the Middle East have turned primarily to the USA and Europe in their accelerated pursuit of advanced military capabilities’, said Pieter Wezeman, Senior Researcher with the SIPRI Arms and Military Expenditure Programme. ‘Despite low oil prices, countries in the region continued to order more weapons in 2016, perceiving them as crucial tools for dealing with conflicts and regional tensions.’

Arms exporters: the USA accounts for one-third of total

‘The USA supplies major arms to at least 100 countries around the world—significantly more than any other supplier state’, said Dr Aude Fleurant, Director of the SIPRI Arms and Military Expenditure Programme. ‘Both advanced strike aircraft with cruise missiles and other precision-guided munitions and the latest generation air and missile defence systems account for a significant share of US arms exports.’

Russia accounted for a 23 per cent share of global exports in the period 2012–16. 70 per cent of its arms exports went to four countries: India, Viet Nam, China and Algeria.

The SIPRI Arms Transfers Database contains information on all international transfers of major weapons (including sales, gifts and production licences) to states, international organizations and armed non-state groups from 1950 to the most recent full calendar year, 2016. SIPRI data reflects the volume of deliveries of arms, not the financial value of the deals. As the volume of deliveries can fluctuate significantly year-onyear, SIPRI presents data for 5-year periods, giving a more stable measure of trends.

The Stockholm International Peace Research Institute is an independent international institute dedicated to research into conflict, armaments, arms control and disarmament. Established in 1966, SIPRI provides data, analysis and recommendations, based on open sources, to policymakers, researchers, media and the interested public. Based in Stockholm, it also has a presence in Beijing, and is regularly ranked among the most respected think tanks worldwide. SIPRI’s vision is a world in which sources of insecurity are identified and understood, conflicts are prevented or resolved, and peace is sustained.