The Binary Code of Body and Spirit: Computing Pioneer Alan Turing on Mortality

“The body provides something for the spirit to look after and use.” 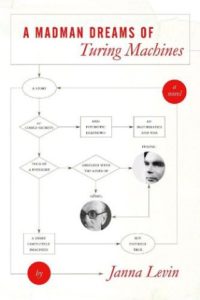 “The void horrifies: so we are all immortal,” Simone de Beauvoir scoffed at the religious escapism of immortality in explaining why she is an atheist, adding: “Faith allows an evasion of those difficulties which the atheist confronts honestly.” But there exists a certain orientation of spirit that is both unreligious and lucid in contemplating mortality. Einstein touched on it in his beautiful letter to the Queen of Belgium, in which he wrote: “There is, after all, something eternal that lies beyond the hand of fate and of all human delusions.” And yet he conceded that such an orientation toward mortality is reserved for those “who have been privileged to accomplish in full measure their task in life.”

To make sense of the untimely loss of a young and unrealized life is a wholly different matter, one which haunted computing pioneer Alan Turing (June 23, 1912–June 7, 1954). 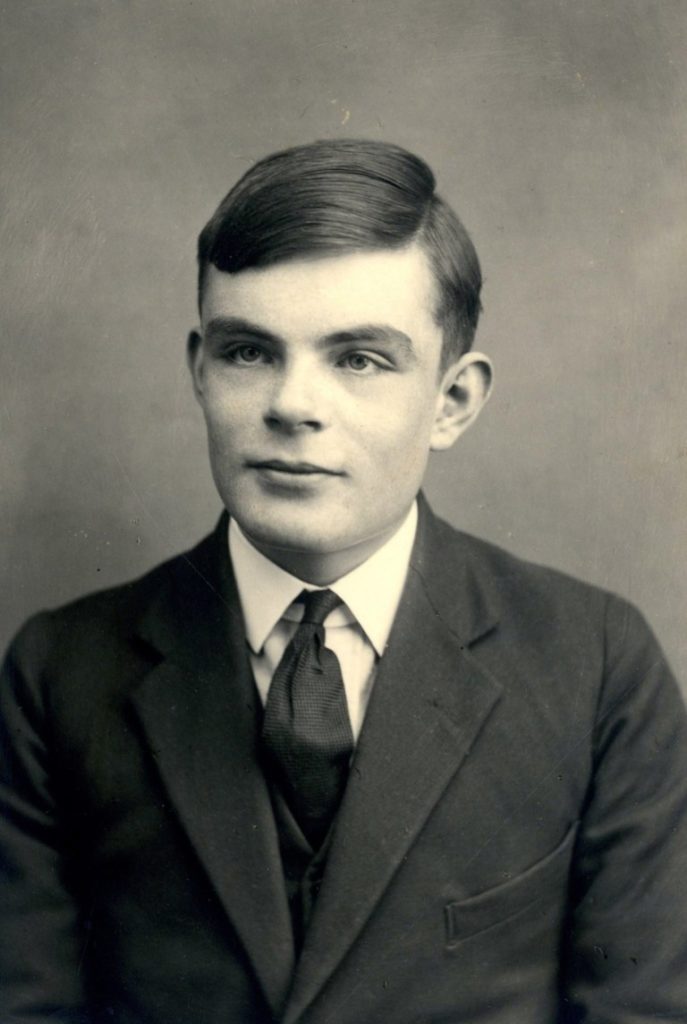 Turing’s decryption of Nazi communication code is estimated to have shortened WWII by two to four years, consequently saving anywhere between 14 and 21 million lives. But despite his wartime heroism, Turing was driven to suicide after being chemically castrated by the U.K. government for being homosexual. More than half a century after his disquieting death, Queen Elizabeth II issued royal pardon — a formal posthumous apology that somehow only amplifies the tragedy of Turing’s life and death.

Tragedy had been with Turing from a young age. At fifteen, while attending the Sherborne School, he fell deeply in love with a classmate named Christopher Morcom. For the awkward and ostracized young Alan, who was bullied so severely that a group of boys once trapped him under the floorboards of a dorm dayroom and kept him there until he nearly suffocated, Christopher was everything he was not — dashing, polished, well versed in both science and art, and aglow with winsome charisma. Alan’s love was profound and pure and unrequited in the dimensions he most longed for, but Christopher did take to him with great warmth and became his most beloved, in fact his only, friend. They spent long nights discussing science and philosophy, trading astronomical acumen, and speculating about the laws of physics. 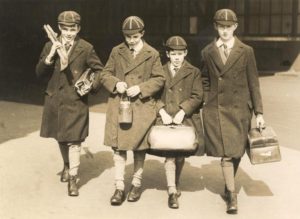 When Christopher died of bovine tuberculosis in 1930 — a disease he had contracted from infected milk, for which there was no common vaccine until after WWII — Alan fell to pieces. He was able to collect himself only through work, by burrowing so deep into the underbelly of mathematics that he emerged almost on the other side, where science and metaphysics meet. Sorrow had taken him on a crusade to make sense of reality, of this senseless ruin, and he spared no modality of thought. Most of all, he wanted to understand how he could remain so attached to someone who no longer existed materially but who felt so overwhelmingly alive in his spirit.

All the while, young Turing remained in touch with Christopher’s mother, who had taken a sympathetic liking to her son’s awkward friend. After Christopher’s death, he visited the Morcoms at their country home, Clock House, and corresponded with Mrs. Morcom about the grief they shared, about the perplexity of how a nonentity — for Christopher had ceased to exist in physical terms — could color each of their worlds so completely. 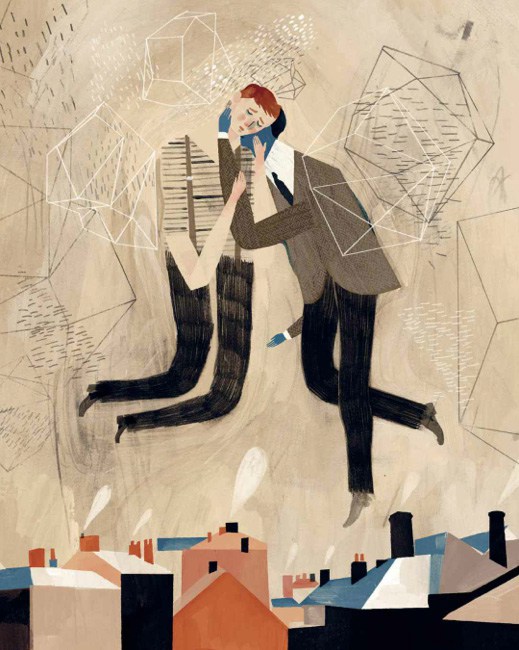 Alan Turing and Christopher Morcom. Art by Keith Hegley from The Who, the What, and the When, an illustrated celebration of the little-known inspirations behind geniuses.

That sorrowful puzzlement is what Turing explored in a series of letters to Christopher’s mother, originally included in his first serious biography and brought to new life in astrophysicist Janna Levin’s exquisite novel A Mad Man Dreams of Turing Machines (public library) — a masterwork of fiction that swirls philosophical poetics around the facts of Turing’s life.

Levin paints Turing’s struggle to conciliate the materialism of his scientific devotion with his spiritual devotion to Christopher even after the material cessation of his existence:

The future, present, and past of every material object is subject to the laws of physics. The orbit of every celestial body, the fall of every drop of rain. His own body a collection of molecules. His desire a cauldron of hormones whose chemistry has just been scientifically documented. His brain a case of matter, blood, and bone.

But he feels direct experience of his own soul, his spirit. He cannot accept that as an aggregate of flesh, a clump of matter, that his future, past, and present are already determined by the laws of physics. He cannot crush out the intuition that he makes choices, influences the world with his mind and spirit.

Chris had shown him the reaction between solutions of iodates and sulfites. Holding the mixture in a clear beaker near his face, he watched Alan’s response as the solution turned a bold blue, tinting Christopher’s hair and deepening the hue of his eyes. To Alan it seemed the other way around, as though Chris’s beautiful eyes had stained the beaker blue.

He often tries to re-create the moment when Chris’s spirit seeped out of the portals of his eyes and infused the room, a stunning concentration of his soul trapped in the indigo liquid in the beaker. He knows the simple form of the chemicals and the rules of their combination, but he can’t shake the force of the impression that Chris makes on him. He can’t limit the experience to the confines of ordinary matter.

That unshakable sense of spirit beyond matter is what 20-year-old Turing articulates in a letter from April 20, 1933:

I was so pleased to be at the Clockhouse for Easter. I always like to think of it specially in connection with Chris. It reminds us that Chris is in some way alive now. One is perhaps too inclined to think only of him alive at some future time when we shall meet him again; but it is really so much more helpful to think of him as just separated from us for the present.

Turing visited Clock House again in July, for what would have been Christopher’s twenty-second birthday. Seeking to reconcile the irrepressible spiritual aliveness felt in grief with the undeniable definitiveness of physical death, as much for himself as for Christopher’s mother, he wrote in another letter to her under the heading “Nature of Spirit”:

It used to be supposed in Science that if everything was known about the Universe at any particular moment then we can predict what it will be through all the future. This idea was really due to the great success of astronomical prediction. More modern science however has come to the conclusion that when we are dealing with atoms and electrons we are quite unable to know the exact state of them; our instruments being made of atoms and electrons themselves. The conception then of being able to know the exact state of the universe then really must break down on the small scale. This means then that the theory which held that as eclipses etc. are pre-destined so were all our actions breaks down too. We have a will which is able to determine the action of the atoms probably in a small portion of the brain, or possibly all over it.

Then as regards the actual connection between spirit and body I consider that the body by reason of being a living body can “attract” and hold on to a “spirit” whilst the body is alive and awake and the two are firmly connected. When the body is asleep I cannot guess what happens but when the body dies the “mechanism” of the body, holding the spirit, is gone and the spirit finds a new body sooner or later perhaps immediately.

As regards the question of why we have bodies at all; why we do not or cannot live free as spirits and communicate as such, we probably could do so but there would be nothing whatever to do. The body provides something for the spirit to look after and use. 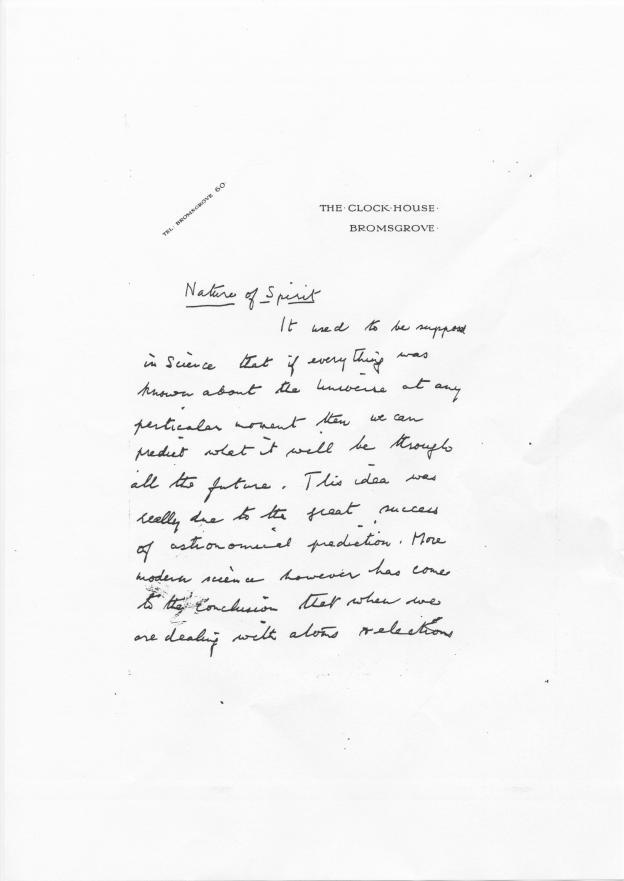 How Turing’s ideas evolved over the course of his life as he tussled with this paradox is among the many profound and possibly unanswerable questions examined with enormous intellectual elegance in A Mad Man Dreams of Turing Machines, another thread of which explores how the mathematician Kurt Gödel shaped our ideas of truth. Complement this particular thread with Marcus Aurelius on mortality and the key to living fully, Mary Oliver on the measure of aliveness, and Oliver Sacks on death, destiny, and the redemptive radiance of a life well lived.