What Did the UN Apartheid Report Expose in Reality?

As Israel moves towards confronting apartheid, the questions raised by the report will become impossible to avoid.

19 Mar 2017 – The most damning aspect of the new report by the UN’s Economic and Social Commission for Western Asia (ESCWA), which accuses Israel of being an apartheid state, is not the unearthing of allegedly long-discredited equations of Zionism with racism and apartheid.

Rather, it’s that the authors have used the scalpel of international law and the seemingly moribund International Covenant on the Suppression and Punishment of the Crime of Apartheid to create a new matrix of analysis of the occupation, its generative dynamics, and likely future path that will prove extremely hard for even Israel’s most ardent defenders to refute in the coming years (PDF).

The report, Israeli Practices Towards the Palestinian People and the Question of Apartheid, immediately gained notoriety when the head of ESCWA, Rima Khalaf, was forced to resign after the UN Secretary General Antonio Guterres denounced the report and asked for it to be removed from the Commission’s website. 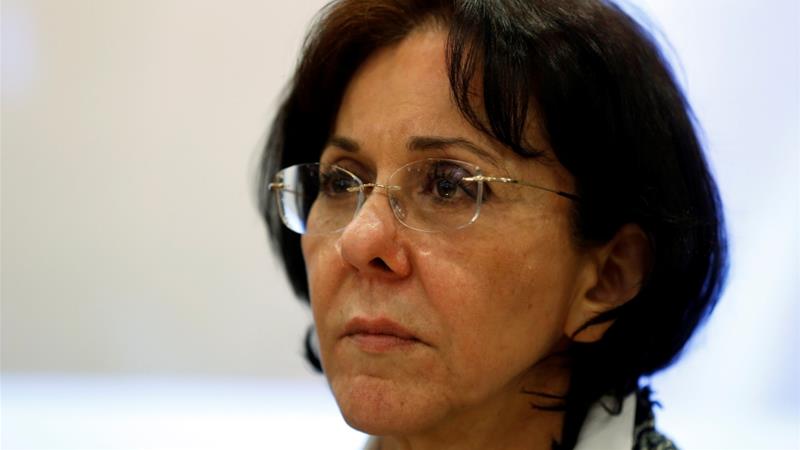 Khalaf, a Jordanian national with extensive government and international experience who was a primary force behind the Arab Human Development Report series which has been highly critical of Arab regimes and the broader regional systems of governance, had to know that heralding the report as the first ever UN one to explicitly describe Israel as an apartheid and “racial state” would bring her downfall at ESCWA.

And indeed, not only was the report disavowed by UN Secretary-General Antonio Guterres and, it seems, removed on his orders from the Commission’s website, Khalaf did resign shortly thereafter.

This begs the question of what she hoped to accomplish by framing the report thus. Although it seems to be removed from the ESCWA’s website (only the executive summary is accessible), the full report can be downloaded here.

As the journalist Ben White explains, the new report is a detailed analysis of Israeli legislation, policies and practices that enable Israel to “operate an apartheid regime” that “dominates the Palestinian people as a whole” and as such is a “crime against humanity under customary international law and the Rome Statute of the International Criminal Court”.

The report describes a panoply of practices, techniques and legal and administrative mechanisms by which Israel maintains a system that segregates Palestinians from Jews on both sides of the Green Line and outside Israel/Palestine based on membership in specific ethno-religious groups.

What makes the report even more controversial is that unlike most accusations of apartheid-like behaviour, which are limited to the Occupied Territories, it accuses Israel of engaging in apartheid even against Palestinian citizens of the state and Palestinians outside the country.

South Africans, too, have debated the issue; while some prominent figures such as Judge Richard Goldstone, who chaired the controversial report into the 2008-09 Gaza War, declared that “in Israel, there is no apartheid”, other scholars and activists, from the Human Sciences and Research Council and Desmond Tutu to prominent Jewish intellectuals such as Lisa Ohayon and David Theo Goldberg – one of the world’s pre-eminent theorists of race – have documented how “the legal structures of apartheid and Israel map on to each other in very disturbing ways” and have little hesitation labelling Israel’s “separation barrier” an “apartheid wall” in purpose and function.

I would invite readers to study the voluminous final report of the South African Truth and Reconciliation Commission and compare it to the regular reports on the occupation, not merely by international human rights organisations but by the US State Department and Israeli Jewish organisations’ reports as well, and ask them to decide for themselves how closely Israeli policies resemble those of the South African apartheid state.

Yet, however important historically and morally, comparisons with South Africa were, for the report’s authors, beside the point.

The only “benchmark” that matters today is whether Israel’s actions fall within the parameters of the Crime of Apartheid as defined by international covenant and the International Criminal Court (PDF).

And the report argues “with clarity and conviction that Israel is guilty of the international crimes of apartheid as a result of the manner in which it exerts control over the Palestinian people”.

More specifically, Tilley explains that “the main finding was that what looks like different policies are in fact part of one policy. The core purpose is to preserve Israel as a Jewish state, and that requires an overwhelming Jewish majority to ensure that Palestinians could never vote in any way that would alter the laws privileging the Jewish people over other people in the state. And we found that the ways different segments of policy work together … all coordinate that central core purpose.”

Crucially, the report deploys a striking new term, the “strategic [elsewhere: geographic and juridical] fragmentation of the Palestinian people,” to describe the main method through which Israel imposes an apartheid regime, with Palestinians divided into four groups who live in four “domains”: Palestinian citizens of Israel against whom ‘civil law’ is deployed to restrict their freedom; Palestinians in East Jerusalem governed by ever more exclusionary ‘permanent residency laws’; Palestinians in the West Bank and Gaza who live under belligerent occupation; and Palestinians living as refugees or in exile who are precluded by law and policy from returning to their homeland.

Each group is oppressed through “distinct laws, policies and practices” that together constitute the larger regime of apartheid in Israel/Palestine.

Hypocrisy and the BDS

Not surprisingly, Israeli officials were quick to question ESCWA’s credibility, given its membership of 18 Arab countries excluding Israel despite its location in western Asia (unlike Tunisia, for example) and the fact that the human rights records of most members are little better than Israel’s.

But hypocrisy is literally written into the fabric of the UN, and is in fact on display every time the US vetoes a Security Council resolution condemning Israel’s prosecution of its interminable occupation, or Russia vetoes a resolution that might force Bashar al-Assad to stop murdering his people by the thousands.

This reality doesn’t change the fact that with the report now part of the UN record, the chances increase that the General Assembly or other bodies will request a ruling from the ICC or International Court of Justice (ICJ) on the legality of the occupation.

The report provides a strong case for the argument that the goals and conduct of the occupation are illegal, and thus that states, international organisations, and civil society are obligated to impose sanctions and other punitive measures to compel Israel to bring its actions into compliance with international law.

Most strikingly, however, the report concludes by calling explicitly for “broaden[ing] support for boycott, divestment and sanctions initiatives among civil society actors”.

In bringing BDS directly into the legal conversation, the authors are opening the way for the ICC or ICJ to affirm the legitimacy of such tactics under international law.

As Israel moves inexorably towards annexing the West Bank, and with it the confrontation of apartheid in its barest form, the questions raised by the report will become impossible to avoid.

In that regard, Rima Khalaf and the report’s authors have done Israelis, Palestinians and the world community a favour by calling for a clear determination by the highest international tribunals as to the nature of Israel’s rule over some five million Palestinians in the occupied territories and millions more living in the shadows of exile, and its responsibilities going forward.

With such clarity at hand, a pathway towards a just and peaceful future for both peoples might finally come into view.

Mark LeVine is a professor of Middle Eastern History at University of California, Irvine, and a Distinguished Visiting Professor at Lund University.