50 Years Later, a Speech by Luther King Has Lessons for a President

6 Apr 2017 – On April 4, 1967, a year to the day before he was assassinated, Martin Luther King Jr. delivered one of the most powerful, controversial speeches of his life: “Beyond Vietnam: Time to Break the Silence.” The legendary orator and organizer, this young Nobel Peace laureate, laid out a bold condemnation of the U.S. war in Vietnam, encouraging collaboration between the civil-rights and the anti-war movements. Fifty years later, as the Trump administration attempts to radically increase the Pentagon budget by $54 billion, and gut social programs and the State Department budget—crucial for achieving diplomatic solutions to conflict—King’s “Beyond Vietnam” speech remains chillingly relevant.

More than 3,000 people had gathered on that spring day in New York City’s Riverside Church. In his speech, King called the United States “the greatest purveyor of violence in the world today,” and committed to oppose “the giant triplets of racism, extreme materialism, and militarism.” He detailed the history of how the U.S. role escalated in Vietnam, then linked the expense of war to poverty at home, saying, “A few years ago … there was a real promise of hope for the poor—both black and white—through the poverty program.” 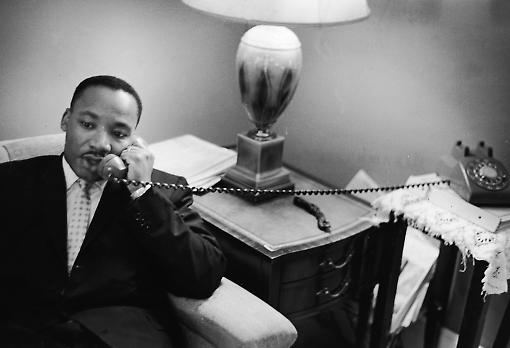 “Then came the buildup in Vietnam,” he continued, “and I watched this program broken and eviscerated, as if it were some idle political plaything of a society gone mad on war, and I knew that America would never invest the necessary funds or energies in rehabilitation of its poor so long as adventures like Vietnam continued to draw men and skills and money. … I was increasingly compelled to see the war as an enemy of the poor and to attack it as such.”

The mainstream backlash against King’s speech was immediate. Life magazine accused King of “betraying the cause for which he worked so long,” adding that “much of his speech was a demagogic slander that sounded like a script for Radio Hanoi.” The Washington Post editorialized: “Dr. King has done a grave injury to those who are his natural allies. … He has diminished his usefulness to his cause, his country, and his people.”

But King would not relent, continuing to pursue what people now call intersectional organizing. When he was murdered one year after that speech, he was in Memphis, supporting striking sanitation workers who were seeking union recognition. On April 3, 1968, in Memphis, he gave his last speech. “I’ve been to the mountaintop,” he declared. Living with continual death threats and FBI harassment, he went on: “Like anybody, I would like to live a long life. Longevity has its place. But I’m not concerned about that now.” Less than a day later, he was dead. The nation’s largely African-American inner cities erupted into riots, and the history of the country was forever changed.

Today, the Rev. Dr. William Barber, head of the North Carolina NAACP, calls King’s “Beyond Vietnam” speech “a prophetic sermon,” and is carrying King’s strategy forward into the 21st century. “Where are we on racism, when we see 22 states in this country passing systemic race-based voter-suppression laws and we have less voting-rights protection today than we had in 1965 with the gutting of the Voting Rights Act?” he said on the “Democracy Now!” news hour. “Where are we, when we don’t use the word ‘poor’ in our public and political conversation? When we just a few weeks ago saw an out-of-control military strike kill 200 innocent citizens, and some 400,000 citizens were killed during the Iraq War, that we should have never gone into? When we’re talking about expanding an already-bloated military budget and spending some $54 billion, that if we use that same money in a modern-day war against poverty and a modern call for health care and education, we could do so much more?”

If Fox News Channel were to pre-empt just one episode of the program hosted by the accused serial sexual harasser Bill O’Reilly and play “Beyond Vietnam,” or if CNN or MSNBC would air the speech in its entirety, there is a chance that President Donald Trump, a voracious cable-news consumer, might see it. Perhaps then he might think twice before escalating the war in Iraq and Yemen, or provoking one against North Korea. As the world reels in horror at the latest poison-gas attack in Syria, most likely launched by the Assad regime against its own citizens, Trump might consider leading the world, now momentarily united in outrage, in a global, diplomatic response that could lead to a political solution there.

With a strong leader committed to peace, the United States could do this. Most likely, though, that difficult work remains for those in whom Martin Luther King Jr. had the most hope: the people, organizing grass-roots power for peace.

The original content of this program is licensed under a Creative Commons Attribution-Noncommercial-No Derivative Works 3.0 United States License. Please attribute legal copies of this work to democracynow.org.