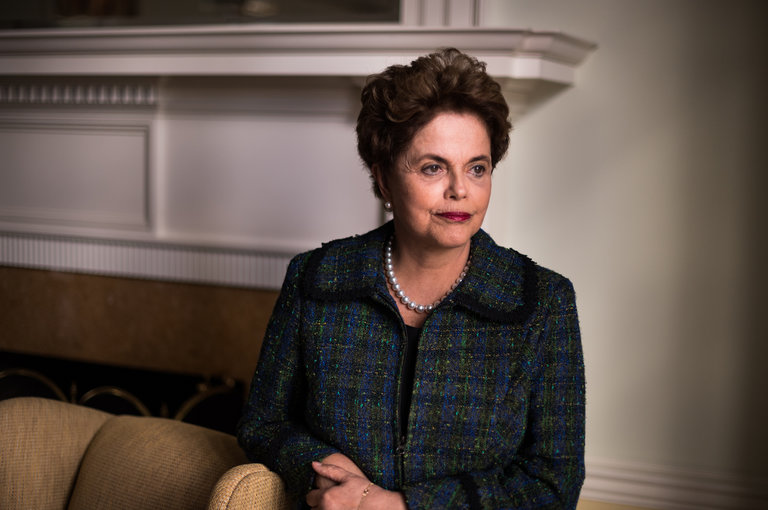 13 Apr 2017 – Nearly a year ago, Brazilian lawmakers voted to suspend President Dilma Rousseff from office, setting in motion the dramatic downfall of the country’s first female leader. Ms. Rousseff, a former guerrilla leader who was tortured during the country’s military dictatorship in the 1970s, was formally ousted last September. Her removal marked the end of a 13-year period of rule by the leftist Workers’ Party and a seismic shift in the country’s political trajectory. I interviewed Ms. Rousseff last weekend at the Brazil Conference at Harvard and M.I.T., during which she delivered a defiant speech warning that Brazil’s democracy is in peril. Below is a lightly edited excerpt of our conversation.

What has your daily routine been like since you were impeached?

I have been reading a lot. I also work out every day, cycling and weightlifting. It is good for the body and for the mind. I do an average of 50 minutes of cycling per day.

What’s the best book you’ve read since you were impeached?

May I list a few? “Makers and Takers: The Rise of Finance and the Fall of American Business,” by Hana Foroohar. I also liked “Homo Deus: A Brief History of Tomorrow,” by Yuval Noah Harari. I read many genres of literature, otherwise I get tired. Now I am at an age in which I reread some books. I have reread the “The Gospel According to Jesus Christ,” by José Saramago and “The Devil to Pay in the Backlands,” by João Guimarães Rosa. It is very beautiful.

What have you learned about yourself during this period?

What life demands from us is courage. With courage you can face adversity. Obviously, I am dealing with hardship. I had, during my life, to face two coups: one by the military and the other by the Congress. Both of them were extremely difficult. In one there was the physical threat of being jailed and tortured, in the other an even bigger threat for the whole Brazilian population, the rights of its citizens and democracy.

If you could turn back time, what would you have done differently?

Usually I don’t ask myself this question. Unfortunately we cannot turn back the hand of time. But I can answer in a theoretical way. One thing I would not have done is approve extensive tax cuts. I did that based on the belief that companies would then invest more and generate more jobs. But that was not what happened: The companies increased their profits without investing more. Also, I did not realize clearly that the “center,” a crucial part of the democratic body which was essential in the fight against the military dictatorship, was shifting to the right. It became an opposition to my government. It is like the story of the Trojan horse, which brings the enemy inside the city. Not realizing that was indeed a mistake.

Eduardo Cunha, the lawmaker who led the impeachment process against you, was recently sentenced to 15 years in prison for corruption and money laundering. Does that make you feel somewhat vindicated?

I don’t think that the sentencing of Eduardo Cunha should be considered a personal revenge. Before he was sentenced, there was a movement in some sectors of the government to save him. The sentencing of Eduardo Cunha does not atone for the fact that this very corrupt person led the impeachment against me. He is the person behind the Dante-esque scene that took place on April 17 of last year.

After you were ousted, your successor, President Michel Temer, appointed a cabinet entirely composed of white men. What did you make of that?

In a few months, when President Michelle Bachelet of Chile steps down, all the heads of state in the Western hemisphere will be men. What does that say about the empowerment of women in politics?

This is not a coincidence. In politics women are not treated in the same way as men. Women face disproportionate discrimination. This does not mean that women are weak. On the contrary, women are very resilient and very capable.

Do you think the Workers’ Party can return to power during next year’s presidential elections?

When your obituary is written, what aspect of your legacy do you hope will stand out?