17 Mar 2017 – São Paulo is for sale. João Doria, mayor since 1 January, is planning to auction off South America’s biggest city piece by piece: not only the racecourse, football stadium and carnival centre, but lighting, transport, health services and even the public funeral system.

THE GLITZY PROMOTIONAL VIDEO is full of glass towers and night shots of glittering avenues; there’s no sign of the heaving lanes of traffic that blast and fume among concrete towers as far as the eye can see. There are few green or public spaces in São Paulo; the biggest, Ibirapuera Park, is now up for sale.

But the unforgiving landscape is the canvas for one of the most vibrant street-art scenes in the world. Cheap blocks of government housing opposite a baked-tarmac motorway are transformed by the enormous figures of beautiful women painted across them. The water-streaked concrete pillars holding up a flyover are covered with colourful images, both political (a crying boy trying to eat a football) and personal (two people holding one another, with rivers for hearts).

Doria began to paint over the graffiti, some of which was decades old, in his first week in office. Like Donald Trump, Doria is a businessman, and campaigned as one. Also like Trump, he is a performer, the presenter of Brazil’s version of The Apprentice. Mauricio Feijão, an urban planner, sees Doria’s idea to paint out the graffiti as a typical populist gesture with little thought behind it.

‘It’s theatre,’ Feijão told me. ‘On his first day as mayor he dressed up as a street cleaner and went downtown to clean up under a bridge. The municipal team went there first and got rid of the homeless for the photo-shoot. There is an expression in Brazilian soccer, “jogar para torcida”. It is used when a player is not really interested in scoring a goal but only making some moves so the crowd goes crazy.’

Doria’s big show backfired. Paulistas were outraged; the culture secretary said the city was too grey and the walls should be repainted. The city promised to pay for spray-paint to encourage artists back. Doria has announced he is going to start a ‘museum of graffiti’ – eight dedicated walls around São Paulo. Private sponsors will supply the paint and prize money.

Colourful street art isn’t the only graffiti in São Paulo. The form of tagging known as pixo is a lot less popular. The young men who spray the rune-like black characters across the city are wild, climbing tower blocks, surfing trains, teetering off ledges to brand all the surfaces they can. Many have died and many have gone to jail. When the American graffiti artist Barry McGee first saw pixo, it made his hair stand on end. ‘It blew me away,’ he says in João Wainar’s documentary Pixo. ‘It completely strangled the city, completely took over every part of the city that was available, every surface of the city that was available, in the quickest, fastest method I have ever seen.’ 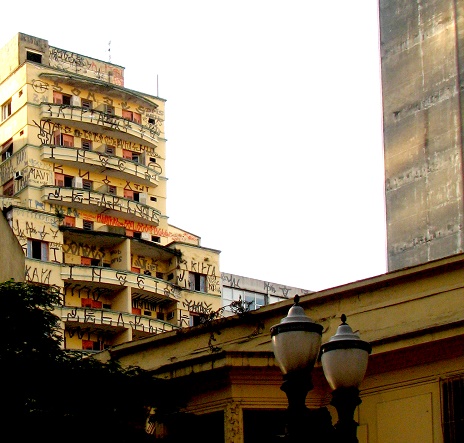 The local graffiti artist Alex Hornest says that pixo is a way in to understanding São Paulo and its grave inequalities. Doria boasts that the city is home to 50 per cent of Brazil’s billionaires and has the largest concentration of shopping malls in Latin America. According to the World Bank, one third of São Paulo’s residents live in slum conditions. The pixadores, Hornest says, are responding to a city that they feel is designed to exclude them.

‘Cities that do not have as much misery, neglect, injustice and class war as São Paulo, do not have graffiti in such excess as we have here,’ he told me. ‘Our problems are so many that people feel they need to go out onto the streets to scream, to protest, to show that they exist. Graffiti is a way of fighting against all the injustices that come every day.’ Wiping out the graffiti won’t solve the problems it’s a symptom of.

According to Feijão, Doria doesn’t much care if the city works or not. ‘I don’t think he wants to understand it deeply,’ he said. ‘If he wanted he could be surrounded by people who could explain this to him.’

Raquel Rolnik, the former UN special rapporteur on adequate housing, is an architect from São Paulo. For her, Doria’s attitude to pixo is part of a broader strategy to erase the presence of the vulnerable and marginalised and to create a ‘corporate city directed to the 1 per cent, their cars and desire of consumption’.