22 Mar 2017 – The ranks of the world’s billionaires registered a sharp increase in 2016, with the number rising by 233 to reach a record 2,043, according to Forbes magazine’s annual survey. This was the first time that the Forbes list of the world’s richest has included more than 2,000 individuals.

The combined wealth of those on Forbes’ billionaires list rose 18 percent to $7.67 trillion, a staggering sum, more than the gross domestic product of all but the wealthiest of the world’s countries. The immediate impetus for the rise are surging stock prices, which have reached record levels since the election of US president Donald Trump, and the rising price of oil over the past 12 months.

More fundamentally, the increasing concentration of wealth among the world’s richest represents a social retrogression in which society’s resources are being plundered in the name of a mad pursuit of private gain.

Carlos Slim Helu of Mexico was number six on the Forbes list with a net worth of $54.5 billion. Despite a $4.5 billion increase in his net worth from last year, Slim moved down the list from the number four position. All told the net worth of Mexico’s billionaires rose 17 percent in 2016 to $116.7 billion. 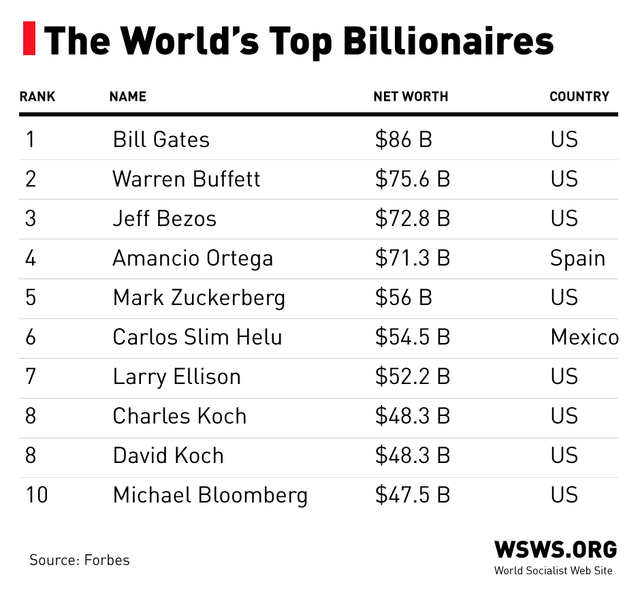 Combined, the top 10 billionaires on the Forbes list alone took in $558 billion, more than the Gross Domestic Product of Venezuela. Just eight of those billionaires control as much wealth as the bottom half of the world’s population, 3.6 billion people, according to Oxfam.

The United States continues to have the largest number of billionaires in the world, with a record 565, an increase of 25 over last year. China is next with 319, while Germany is third with 114. China had the most newly minted billionaires last year, adding 76.

In impoverished India, where 13 Maruti Suzuki autoworkers were recently sentenced to life imprisonment on frame-up charges, there are 101 billionaires, making the country fourth on the list in terms of the super wealthy. At $23.3 billion, telecom tycoon Mukesh Ambani is India’s richest man, in a country where the average wage is just $295 per month.

There are 14 billionaires living in Sub-Saharan Africa, another region noted for its high proportion of people living in extreme poverty. The richest is Nigerian Aliko Dangote, ($12.1 billion) chairman of Dangote Cement, Africa’s largest cement producer.

US President Donald Trump is 544th on the list, with an estimated net worth of $3.4 billion, based largely on his holdings in the New York real estate market.

In the United States, meanwhile, the compensation of top executives also rose in 2016, up from its already obscene levels. The median compensation of chief executives at the 104 largest US companies rose 6.8 percent for 2016 to $11.5 million, according to the Wall Street Journal. Twice as many CEOs saw pay increases as pay cuts, with most of the compensation coming in the form of stock awards.

These figures provide a snapshot of the degree to which the world is being plundered by a financial elite that has amassed wealth on a scale that has no historical precedent. The growth of these fortunes parallels a process of social destruction in which the vast majority of the world’s population are being stripped of resources in order to provide money for tax subsidies to the rich and increases in military spending.

A large portion of the world subsists on less than $2 per day. Famine is threatening some 20 million people in Yemen as well as South Sudan, Somalia and northeast Nigeria, the product of predatory wars stoked by the United States.

In Western Europe the welfare state set up in the wake of World War II is being dismantled while Germany and other imperialist powers rearm in preparation for war.

Meanwhile, in the United States, the already inadequate social safety net is being further slashed to provide tax cuts for the rich and pay for a big increase in military spending. Life expectancy in the United States declined for the first time in 23 years in 2015 after decades of stagnant or declining income, cuts in health care services and other social programs and a burgeoning drug epidemic.

In the United States for the past four decades, Democratic and Republican administrations have seamlessly and without interruption proceeded with the dismantling of the social gains of the working class in order to enrich the financial aristocracy.

This process intensified with the election in 2008 of Barack Obama, whose administration made unlimited funds available to bail out Wall Street and, through its policies of quantitative easing, opened the spigots of the Federal Reserve to flood money into the stock market.

The policies of Obama paved the way for the election of the billionaire Trump, the direct representative of the criminal financial elite. Since the election, the stock market has reached record levels in anticipation of further tax handouts to the rich and the dismantling of health, safety and environmental regulations in the interests of boosting corporate profits.

There is a bipartisan consensus in the US Congress for an overhaul of the health-care system based on further restricting access and slashing costs so that more money can be made available for the military and tax cuts. Both Democrats and Republicans reject the notion that health care is a social right that should be made available to everyone free of charge, claiming, “there is no money.”

However, as the Forbes billionaire list demonstrates, there are resources aplenty for satisfying all pressing social needs. It is the present irrational organization of society and the subordination of all aspects of economic and social life under capitalism to the demands of a rapacious financial aristocracy that is the main stumbling block to providing for the well-being of the world’s population.

This raises the necessity for the working class to unite its forces globally for the socialist transformation of society. This means seizing the wealth of the corporate and financial elite and placing the major banks, petrochemical, industrial, transportation and health-care companies under the democratic ownership and control of the working class. These resources must be employed for the raising of the living standards of the world’s population and the provision of decent wages, healthcare, education and housing for all.