Why Washington Was a No Show at Human Rights Hearings

By sitting out IACHR hearings, the Trump administration signals its contempt for international accountability. 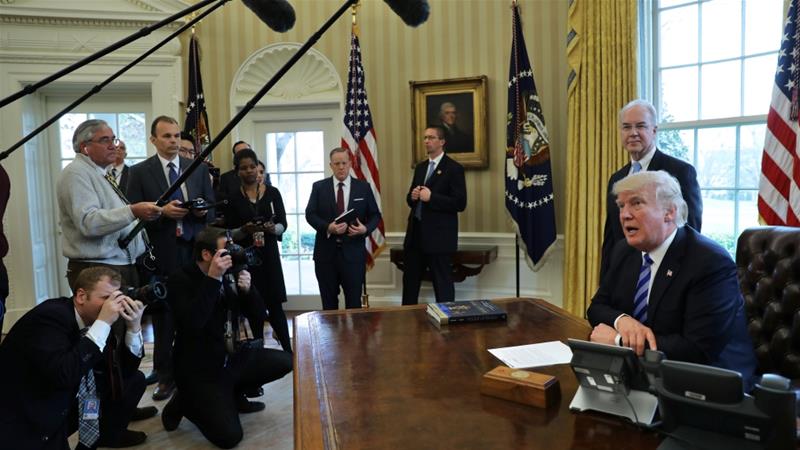 The Trump administration has little interest in embracing a multilateral approach to human rights and institutions. [Reuters/Carlos Barria]

27 Mar 2017 – The Trump administration’s failure to appear at hearings at the Inter-American Commission on Human Rights on March 21 telegraphs its disregard for international institutions generally and human rights in particular.

Trump officials notified the Commission, which is the independent human rights organ of the Organization of American States, a day before the scheduled hearings that it would not attend. State Department official contended that it would be inappropriate to participate since several of the hearings addressed issues under judicial review: the administration’s executive actions on immigration and its greenlighting of the Dakota Access Pipeline, which are winding their ways through the courts.

But that explanation failed to assuage critics, who argued that Washington’s absence erodes its legitimacy, emboldens authoritarian leaders in the hemisphere to shrug off their own accountability and dodge dialogue and presages broader disengagement with international human rights institutions.

The move represented an abrupt departure from past practice. The United States has a long, bipartisan history of engaging with the Commission, even when the topic is being litigated. Further undermining the administration’s stated excuse, among the hearings scheduled were the country’s failure to respect the rights of asylum seekers – grievances that predate the Trump administration but endure under his watch – and a case about Peruvian-Japanese detention during World War II that is not the subject of pending litigation.

A State Department official sought to offer reassuring words, claiming that the refusal to participate “does not have any bearing on current or future US engagement with the Commission”.  But if ongoing litigation were really the driving force behind Washington’s absence, officials could have signalled their respect for the process and the participating parties by attending the meeting and rebuffing questions they deemed inadvisable to answer.

Human rights groups were outraged. Jamil Dakwar, director of the American Civil Liberties Union human rights programme, noted: “This is another worrying sign that the Trump Administration is not only launching an assault on human rights at home, but is also trying to undermine international bodies charged with holding abusive governments accountable.”

And according to Clara Long, US Programme researcher at Human Rights Watch: “In pulling out of this hearing, the United States is offering a negative example for the rest of the countries in the Americas, who show up and engage in the Inter-American system.” The refusal to participate puts the US in the company of other countries whose human rights records it disdains.

Some observers have suggested that the administration’s decision may be more reflective of lax attention to protocols and its staffing of the State Department than outright hostility to the Commission and its mission. But whether the result of intentional snub, dysfunction or different priorities, the move damages US leadership.

“This reduces a lot of the Trump administration’s credibility and legitimacy on human rights issues,” Jose Miguel Vivanco, head of the Americas division of Human Rights Watch, told the Miami Herald.  “In addition to it being a symbol of arrogance, [the US] risks not being taken seriously when they criticise other countries for not showing up at these hearings,” Vivianco said.

The administration’s absence didn’t thwart the proceedings, during which groups offered testimony amid the spectacle of empty chairs administration officials were expected to fill, while Commission officials expressed dismay at Washington’s intransigence. Commission Vice President Margarette May Macaulay called the administration’s refusal to show up “a pity”, while Commissioner Paulo Vannuchi lamented the refusal to attend, “which is what would have made it possible for there to be a democratic exchange of opposing views being aired”.

The move occurred against the backdrop of other indications that the Trump administration has little interest in embracing a multilateral approach to human rights and institutions.

Earlier last week, UN ambassador Nikki Haley announced that the US was boycotting a UN Human Rights Council session because of perceived anti-Israel bias. Secretary of State Rex Tillerson previously threatened to withdraw from the Human Rights Council altogether, given what he says is unfair treatment of Israel, as well as the inclusion of countries with blemished human rights records among its ranks.

In a letter obtained by Foreign Policy, the top diplomat said that the human rights body required “substantial reform” if the US is to remain involved. Tillerson also provoked consternation when he skipped the release of the State Department’s annual human rights report, which reviews the record of all other nations but abstains from assessing its own shortcomings.

Critics are wary of other administration efforts to undermine transnational accountability, such as its effective withdrawal from Extractive Industries Transparency Initiative. President Donald Trump is reportedly planning to cut billions from UN funding, which could usher in a “breakdown of the international humanitarian system as we know it”.

Under ordinary circumstances, Washington prefers not to be named and shamed for violating international norms. But Trump’s contempt for multilateralism and accountability is hardly surprising. After all, this president previously expressed no qualms about promoting torture, filling up Guantanamo Bay prison and killing the families of terrorists.

To be sure, Washington’s human rights record has been far from perfect, both at home and abroad, but at least the Obama administration promoted the architecture of internationalism and the human rights principles and protections it sought to uphold. While the Trump administration has given occasional, anemic lip service to these ideals, its actions speak far louder than words.

Lauren Carasik is a clinical professor of law and the Director of the International Human Rights Clinic at Western New England University School of Law. She has provided legal support for the water protectors.