25 May 2017 – When China hosted a two-day conference in May to help revive the ancient trade routes from Asia to Europe and Africa it was greeted with scepticism by most of the western media. But in much of Asia the mood was more of optimism and opportunity.

CNN reported that “some countries raised concerns over the project seen as boosting Beijing’s global clout on trade and geopolitics” – a reoccurring theme in many of the western media reports. While pointing out that the U.S., Japan, India and most of the European leaders had boycotted the meeting BBC described it as a Chinese bid for global leadership. Australia’s ABC said that China wants its ‘new Silk Routes’ to dominate world trade. 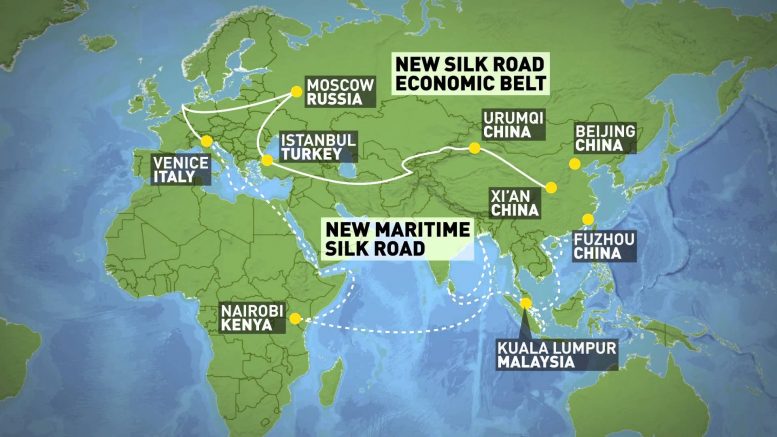 Undoubtedly, China’s multi-billion dollar project to fund building railroads, bridges, and ports and creating free trade zones around these will help China to expand its trading links, but it is not just a one-way flow. In contrast, when European countries expanded trade relations with Asia, they came with gunboats, occupied lands and enslaved people to serve the building of European trading empires. Against that backdrop, China’s project would appear to be a more altruistic enterprise.

United Nations Secretary-General António Guterres, who attended the May 14-15 event in Beijing, drew comparisons between China’s ‘One Belt, One Road’ initiative (BRI) and the the Sustainable Development Goals (SDGs), saying both are rooted in a shared vision for global development.

“In order for the participating countries along the Belt and Road to fully benefit from the potential of enhanced connectivity, it is crucial to strengthen the links between the Initiative and the Sustainable Development Goals,” Guterres noted, adding that the 17 Goals can guide the policies and actions under the Belt and Road towards true sustainable development.

“We cannot resolve modern challenges using old approaches. We need new ideas,” argued Russian President Vladimir Putin, telling the delegates. “We should set a role model for the global community of how we can work together, develop together, based on equality and respect for national sovereignty”.

President Xi Jinping in his opening keynote address cited China’s previous efforts in reaching out to the rest of the world, saying that Chinese people’s interactions with the world relied not on gunboat policy, but “envoys on camels with a sincere attitude”.

“History is the best teacher,” argued Xi. “The history (of the ancient Silk Road) showed us that we can move along with mutual respect … the countries along the ancient Silk Road were once places with milk and honey, but now are full of turbulence, conflicts and crisis. Such conditions must be addressed. We must have mutual cooperation and a sustainable security outlook.”

Pointing out that the ancient trade routes were open, tolerant and strove towards win-win cooperation, President Xi pledged to invest at least 780 billion yuan ($113 billion) on the project through China’s Silk Route Fund and its banks.

For the BRI to realize its full potential India is a crucial partner. But Prime Minister Narendra Modi was a notable absentee at the Summit. India has been upset over China’s funding of a rail link to Central Asia and Europe through disputed territory in Kashmir. The China-Pakistan Economic Corridor (CPEC), a pilot project of the BRI, passes through Gilgit-Baltistan, which India considers a disputed area between India and Pakistan. However, the trade between India and China has hit the $70 billion mark.

Former Indian ambassador to China, Ashok Kantha acknowledges that it is one of the most ambitious and imaginative programs to be rolled out by a government. But, China needs to be sensitive to India’s sovereignty concerns, he argues. “(CPEC), passes through Pakistan-occupied Kashmir, a region that belongs to India and is under the control of Pakistan,” he writes in a commentary published by South China Morning Post (SCMP).

“Apart from the CPEC, India also has misgivings about the manner in which the BRI is being pursued in its neighborhood. For instance, the development of ports under Chinese operational control as part of the Maritime Silk Road strategy has raised concerns in India, which need to be addressed,” adds Kantha. ”The Belt and Road plan is a Chinese initiative rather than a multilateral enterprise undertaken after prior consultation with potential partner countries, and India has not endorsed it.”

However, Kantha is of the view that both India and China have ample common interests to develop trade routes in the region, and cites the sub-regional grouping being established between Bangladesh, China, India and Myanmar. He also refers to India’s ‘Look East’ strategy. “Two great nations and civilizations such as India and China need not endorse or sign on to each other’s strategies,” notes Kantha. “A more pragmatic approach will be to explore synergies and look at projects they can work on together.”

Regional leaders such as the Malaysian Prime Minister Najib Razak, the Indonesian President Joko Widodo and the Philippine President Rodrigo Duterte attended the Summit. So did the Italian Prime Minister Paolo Gentiloni and the International Monetary Fund chief Christine Lagarde.

BRI is also expected to reshape economic and trade relations in the Central Asian region, notably Kazakhstan and Kyrgyzstan, through which most of the rail traffic between Asia and Europe would go. Chinese multinational companies have been very active in the region, which was part of the former Soviet Union, and some have been allegedly entangled in corruption scandals with the local political elites. In 2016 there were protests in Kazakhstan when Chinese companies were suspected to be involved in corrupt land deals.

Jean-Pierre Lehmann, a visiting professor from Switzerland at the University of Hong Kong, writing in the SCMP, argues that those who look at China’s initiative with suspicion should take note of history.

“While the US presents itself as the great global moralizer, it seems to forget that its rise to great power status included the genocide of Native Americans, the enslavement of millions of Africans, wars against its Latin American neighbours and the conquest of the Philippines. While China went to war against Vietnam in 1979 (and lost), in terms of crimes against humanity, it was nothing compared to the war against Vietnam (and Laos) waged (and lost) by the US,” notes Prof Lehmann.

“China’s most awesome achievement over recent decades, the lifting of hundreds of millions out of poverty and the creation of a vast new urban middle class,” he argues, has created a peaceful transformation of the world, contributing to global economic growth. “Thousands and thousands of Chinese come to visit the Louvre in Paris these days, to gape at the Mona Lisa and other masterpieces of art, not to pillage and burn it down as French troops (in cahoots with the British) did to the Summer Palace in Beijing.”

In the final communiqué, participating nations agreed to promote “practical cooperation” in building trading infrastructures such as roads, railways, ports, energy pipelines and telecommunications and jointly work on a long-term stable and sustainable financial system.