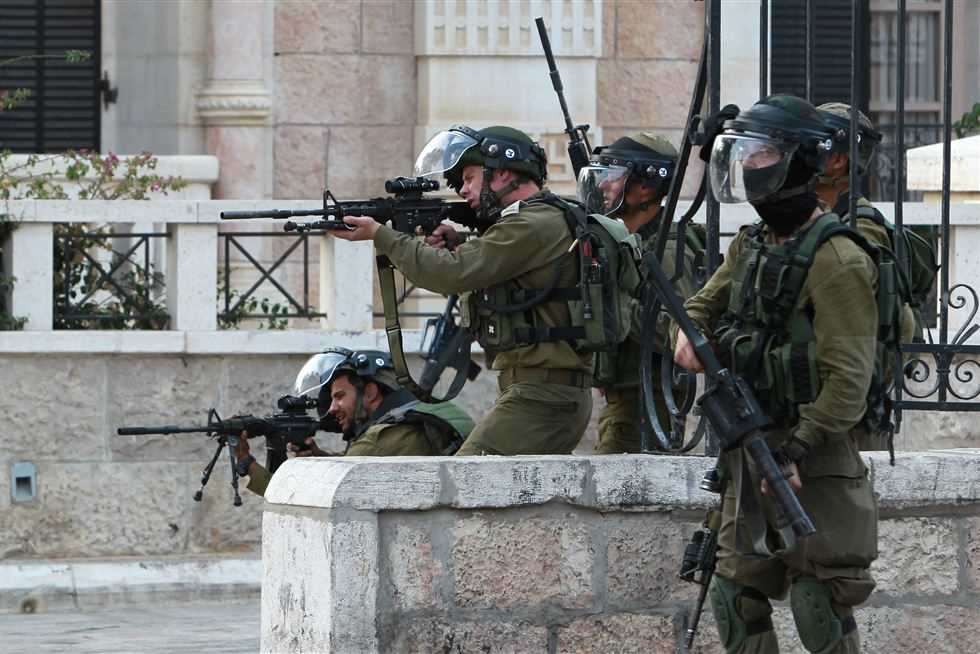 Israeli soldiers aim their weapons at Palestinian protesters during 2015 clashes in Bethlehem. Photo by AFP

BETHLEHEM — In its 2016 annual report released on Wednesday, the United Nations Office for the Coordination of Humanitarian Affairs (OCHA) denounced Israeli policies for remaining “the key driver of humanitarian need” in the occupied Palestinian territory (oPt). 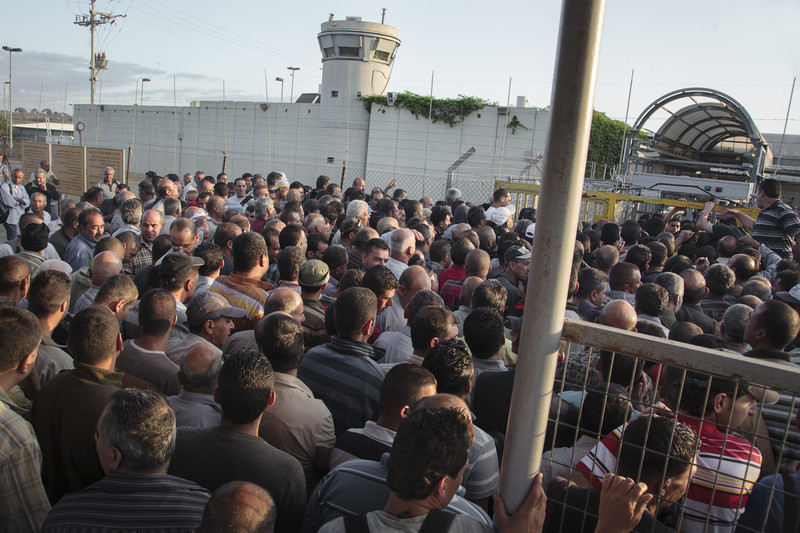 The sun rises on a crowd of Palestinian men still waiting to file through the single gate into the Eyal checkpoint. The checkpoint will remain congested until late into the morning. Photo by Daniel Tepper, +972.

OCHA estimated that some 4.8 million Palestinians were affected by the occupation, two million of whom were “in need of humanitarian assistance and protection” and exposed to conflict, violence, forced displacement, and restricted access to essential infrastructure and services.

“The prolonged occupation, with no end in sight, cultivates a sense of hopelessness and frustration that drives continued conflict and impacts both Palestinians and Israelis,” the report deplored, days ahead of the 50-year anniversary of the Israeli occupation of the West Bank and East Jerusalem.

According to OCHA statistics, 2016 saw a marked drop in both Palestinian and Israeli fatalities related to the conflict compared to 2015, a year that witnessed significant unrest across the occupied Palestinian territory.

According to Ma’an documentation, 112 Palestinians and 15 Israelis died in 2016 as a result of the conflict.

Despite the marked drop in casualties, the OCHA report nonetheless warned that Palestinian civilians “continued to be subjected to threats to their lives, physical safety and liberty from conflict-related violence, and from policies and practices related to the Israeli occupation.” The report added:

“Security considerations notwithstanding, concerns remain over possible excessive use of force and extrajudicial executions by Israeli forces in their response to certain Palestinian attacks or suspected attacks, particularly after the threat has been neutralized. Accountability is essential to ensure justice for victims and to prevent future violations.”

The report’s critique echoed the numerous condemnations of Israeli forces for carrying out a “shoot-to-kill” policy of Palestinians who could have easily been disarmed and detained without being shot to death by Israeli forces, and of a “culture of impunity” reserved for Israelis who commit acts of violence against Palestinians.

“At its heart, the crisis in the OPT is one of a lack of protection for Palestinian civilians — from violence, from displacement, from restrictions on access to services and livelihoods, and from other rights violations — with a disproportionate impact on the most vulnerable, children in particular”
— Statement by David Carden, head of OCHA in the oPt

“While the trends vary from one year to the next, the pervasive lack of protection and accountability for violations of international law remains,” he added, in an allusion to persistent international inaction over Israeli transgressions.

“The occupation denies Palestinians control over basic aspects of daily life, whether they live in the Gaza Strip or in the West Bank, including East Jerusalem. Their ability to move unimpeded within their own country, to exit and return, to develop large parts of their territory, build on their own land, access natural resources or develop their economy is largely determined by the Israeli military.” 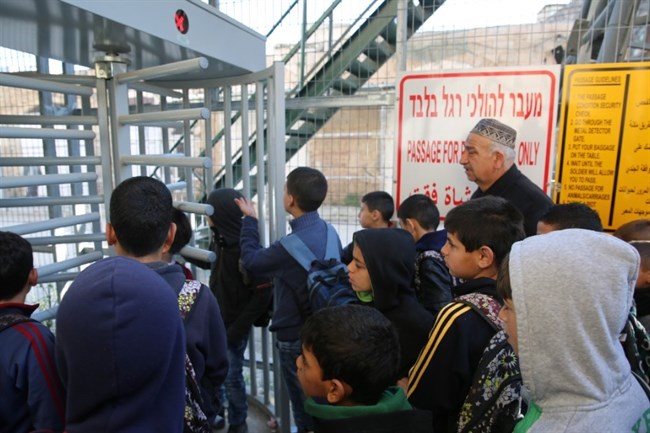 No freedom of movement: a class of schoolchildren waiting to go through a military checkpoint in Hebron. Photo by Christian Peacemaker Teams.

The reported reiterated that more Palestinians were forcibly displaced by Israel due to home demolitions in 2016 than in any year since the UN agency began keeping count in 2009, with 1,601 people, 759 of whom children, being affected by the contested policy last year.

While Israel demolished the vast majority of the 1,094 affected buildings over claims that they lacked nearly impossible to obtain construction permits in occupied East Jerusalem and the West Bank, 29 houses were punitively demolished or sealed following attacks allegedly carried out by Palestinians against Israelis.

Caterpillar D9 armoured bulldozers and other armoured vehicles destroy homes in the town of Qalandia, December 2015. Photo from ICAHD.

Punitive home demolitions have been widely condemned as an act of collective punishment, illegal under international law, and ineffective in deterring attacks.

OCHA also recorded the demolition or confiscation of 300 structures donated by aid organizations to Palestinians in need, a three-time increase from 2015 which caused an estimated $730,000 loss. 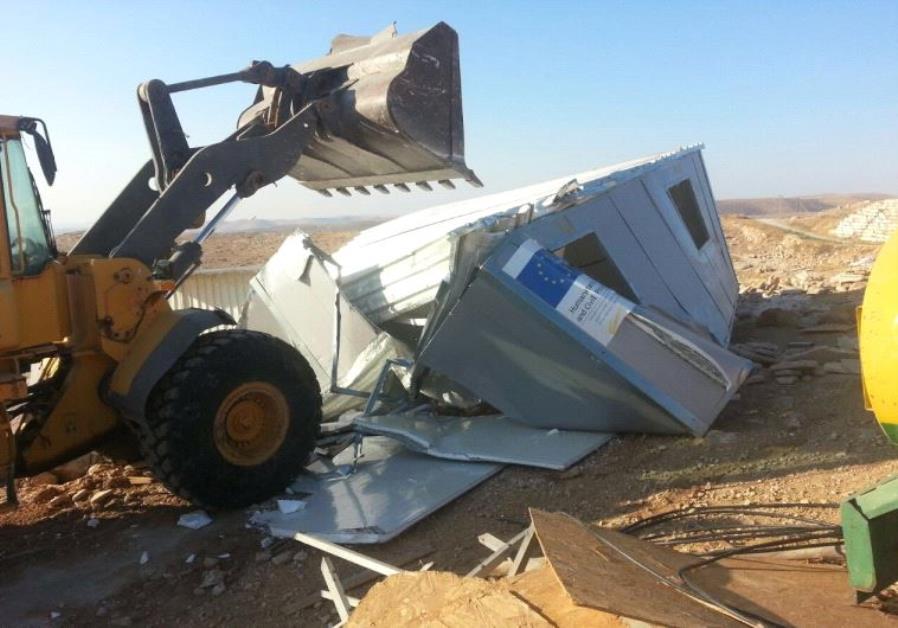 “Demolition of illegal structures built by Arabs in the West Bank’s Area C, August 9, 2016” says the photo and caption by COGAT, an IDF unit and the governing body in the oPt. These modular homes have been donated by the EU but usually get demolished, as does any building which does not have the mythical building permission.

The report warned that thousands more Palestinians were vulnerable to forcible transfer policies “due to a coercive environment generated by Israeli policies and practices, which create pressure on residents to leave their communities.”

Meanwhile, OCHA noted that it had recorded 572 “movement obstacles” such as checkpoints across the West Bank in 2016, with an additional 110 such obstacles in H2, the Israeli-controlled area of the city of Hebron, alone.

In the Gaza Strip, which has stood under an Israeli blockade for nearly ten years, OCHA lamented the continued displacement of some 47,200 people more than two years after the devastating 2014 Israeli assault on the small coastal territory.

The report also pointed to the ongoing political tensions between Hamas, the de facto ruling party in Gaza, and the Fatah-led Palestinian Authority in the West Bank as a “serious contributing factor” to the humanitarian crisis.

“Nearly a decade of blockade, internal divide and recurring conflict, alongside a lack of action to adopt measures that would resolve chronic needs, has left the Gaza Strip especially vulnerable,” Carden warned.

The report also noted that the number of Palestinians allowed to exit the Gaza Strip via the Erez border crossing with Israel decreased by 13 percent from 2015 to 2016, whereas Israel approved only 64 percent of medical patients’ requests to exit through Erez in 2016, compared to a 77 percent approval rate in 2015. 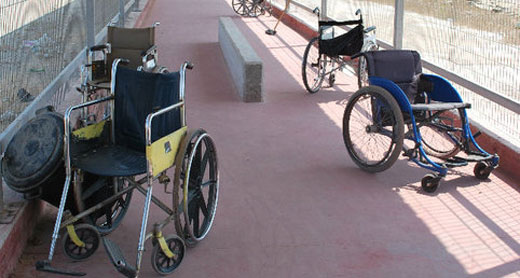 Waiting wheelchairs at Erez Crossing. B’Tselem says “As a rule, Israeli authorities permit patients to enter Israel for medical care only in life-and-death cases. Although permits are sometimes issued for people suffering from severe but non-life threatening conditions, even then the treatment is sometimes cut short because authorities refuse to issue additional permits. The criteria for issuing permits for what Israel calls “quality of life” medical care are unknown. This leaves patients in a constant state of uncertainty. Many have no choice but to go without care, including people suffering from severe orthopedic problems, hearing and visual impairment and other grave illnesses. ” Photo by Medical Aid for Palestinians, Oct. 2011.

The report stated that some 517 Palestinians were able to exit Gaza via Israel each day on average in 2016, in stark contrast to the 26,000 daily exits in 2000, prior to the Second Intifada and the Israeli siege.

Gazans’ restricted freedom of movement has also been worsened by Egyptian enforcement of the Israeli siege, as the Rafah border crossing between Gaza and Egypt was only open 44 days in 2016.

The UN had already warned in 2015 that the Gaza Strip would become uninhabitable for residents by 2020, pointing to the devastation of war and nearly a decade of Israel’s blockade.