Trump’s Sword Dance Sets Off the War of the Wahhabis

US President Donald Trump could not possibly have predicted the game-changing after-effects of his triumphal sword dance in Riyadh. 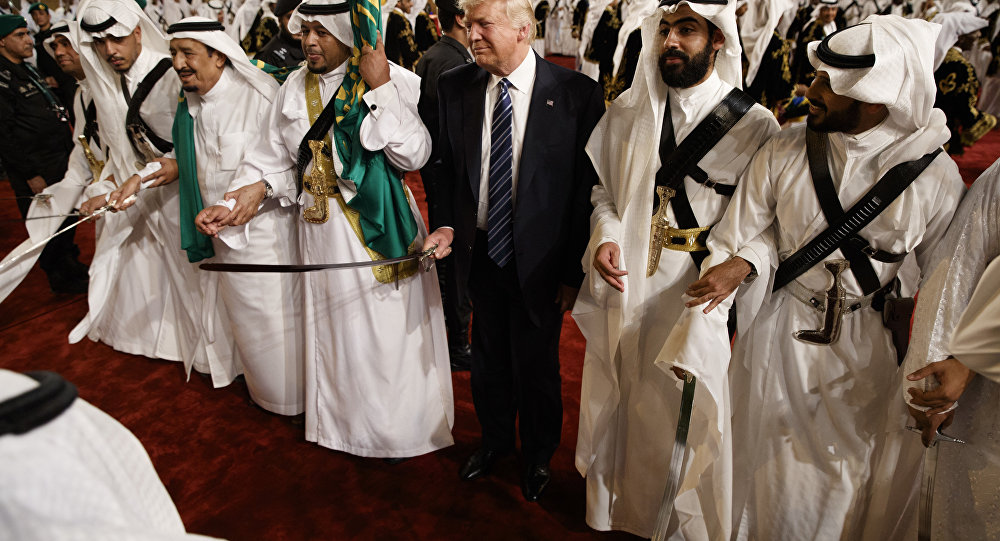 7 Jun 2017 – The fact is the House of Saud went amok, in a flash, going after Qatar and bombing from the inside that glorious Arab NATO project – call it NATOGCC — sworn with pomp over a glowing orb.

An excited Trump tweeted three times his approval for Riyadh going after Doha.

Trump and NATOGCC had equaled Daesh and Iran as “terrorists”. The House of Saud went one up — and denounced Qatar for top terror financing, which equals Don Corleone hurling Mafioso accusations against Tony Soprano.

But then, in an unexpected plot twist, Daesh, handily, graphically, underlined the cosmic stupidity of the whole charade – staging, or at least claiming to stage a terror attack against the Parliament and the Imam Khomeini shrine in Tehran.

The current Emir of Qatar, Tamim bin Hamad al Thani, now “guilty” for not blaming Iran as the root of all evils in the Arab peninsula, might even be following the steps of his own father, Hamad, who invented modern Qatar and deposed himself – under Saudi pressure – in favor of his son in 2013.

We can’t forget that Bandar bin Sultan, a.k.a. Bandar Bush, notorious former top assembler/weaponizer of jihadis, and frustrated “liberator of Syria”, had famously described Qatar in the past as “300 people and a TV station”.

So what is really going on in this noxious petrodollar swamp?

Let’s cut to the chase and establish that this nasty inter-GCC cannibalization has nothing to do with the Global War on Terror (GWOT).

Among massive disinformation crossfire, a trail of evidence points to a concerted strategy elaborated by the Israeli lobby (via the Foundation for Defense of Democracies, founded, among others, by nefarious casino schemer Sheldon Adelson, and very close to Bibi Netanyahu); US neocon/Ziocon/neoliberalcon elements; and the UAE ambassador in Washington, Yousef al-Otaiba.

Leaked emails have shown how Otaiba – widely idolized in the Beltway because of his “largesse” – and the neocon Foundation for Defense of Democracies have discussed means of teaching Qatar a lesson for its support of Hamas, and overall non-confrontational policies towards Iran. Otaiba also happens to be close to Jared Kushner – which would explain Trump’s reaction to the anti-Qatar blitzkrieg.

Unlike Qatar, the House of Saud and the UAE are one step away from establishing diplomatic relations with Israel – the sine qua non condition imposed by Washington to insert Israel in an anti-Iran Arab NATO guided by Riyadh.

A previous row in 2014 offers additional background. Regional intel operatives confirm at the time there were military Emirati maneuvers not far from the Qatari border; London and Paris, for instance, knew all about it.

But the head of the House of Saud in charge at the time was the late King Abdullah, who was in fact an appeaser. The Head-Chopper-in-Chief now is Warrior Prince Mohamed bin Salman, a.k.a. MBS, an arrogant twat who’s already, miserably, losing a war on Yemen — conducted with billions of dollars in US and UK weapons — that has provoked a horrific humanitarian crisis in the poorest nation in the region. It is MBS who ordered the Saudi demonization of Qatar. 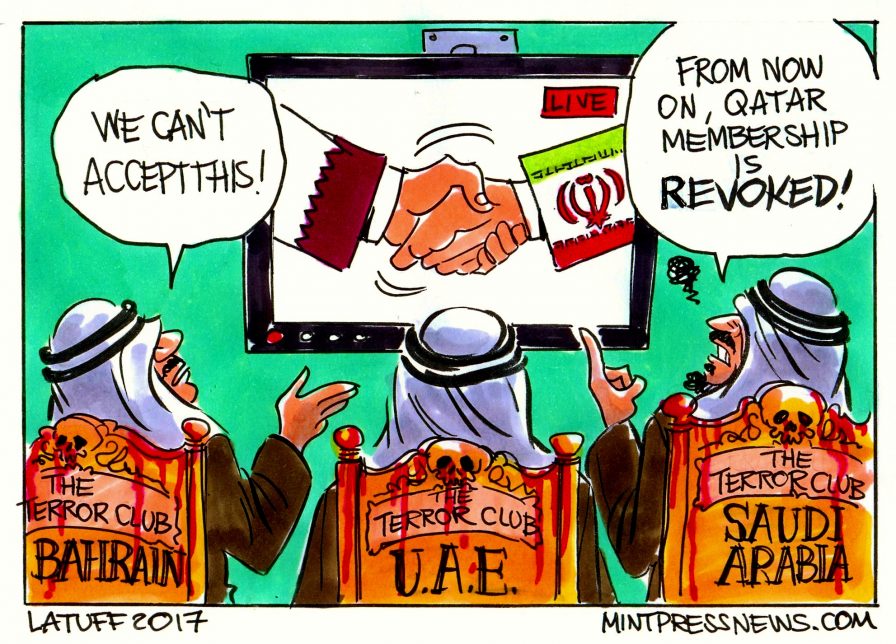 Let me out of the terror train

The “terra terra terra” shorthand, for the House of Saud, applies mostly to the accusation of Qatar supporting Shi’ite protest movements in eastern Saudi Arabia. That’s ridiculous; Doha is not involved.

And then there’s the accusation of Qatar supporting Islamists. That’s exactly what powerful Saudi donors – many linked to the monarchy – do.

Doha does support, big time, the Muslim Brotherhood – which has not much to do with al-Qaeda and/or Daesh, and is hated with a vengeance by Riyadh and its puppet al-Sisi in Cairo, who survives on Saudi handouts. What powerful Qatari donors did (up to $3 billion) was support al-Qaeda in Syria, a.k.a. Jabhat al-Nusra, which vast US neocon/neoliberalcon sectors brand as “moderate rebels”.

The Saudis, meanwhile, supported their own jihadis in Syria – and elsewhere. WikiLeaks has unequivocally proved how “donors in Saudi Arabia constitute the most significant source of funding to Sunni terrorist groups worldwide”.

Apart from complex tribal rivalry issues, the key religious factor is that Qatar – unlike Saudi Arabia – is tolerant towards non-Salafis, or “revolutionary” Salafis like the Muslim Brotherhood, and does not try to globally export its version of Wahhabism. For all practical purposes, hardcore Saudi imams consider Qataris heretics. As if they’re almost as bad as “apostate” Shi’ites.

The schism has translated, in practice, into a proxy war in Libya for example. Doha supports Islamic militias in Misrata as well as those faithful to the “Mufti of Qatar” Sadiq al-Ghariani. The Emirates and Egypt support Gen. Khalifa Haftar, the chief of the self-styled Libya National Army (LNA).

Saudi intel disinformation agents are spreading that “Turkey and Qatar are the last two states run by the Muslim Brotherhood. Most probably Qatar will experience a change of regime and exit being the bankroller on behalf of Britain to support all kind of chaos in the region, and that include playing from behind the scenes with Teheran.”

Utter diversionist nonsense. The plain fact is the House of Saud is absolutely desperate. Oil price remains low, around $50 a barrel. The monster Saudi IPO on Aramco is only 12 months away. The House of Saud needs to move the markets towards a higher oil price by any means necessary – ultimatums and threats of war included.

A non-ideological US intel source goes further, stressing how “Turkey, Iran and Russia are moving closer together. The question remains who will control the Gulf States and the oil price — which was being manipulated so far to destroy Russia. The deal between Saudi Arabia and Russia is really just a minor improvement.”

So no wonder obfuscation remains the norm – with narratives taking attention away from the House of Saud and placing it on Iran, and now also Qatar.

And then there’s the key Pipelineistan angle, mixed with how Qatar as a natural gas powerhouse is immensely annoying OPEC producers Saudi Arabia and UAE.

Qatar is the largest global exporter of liquefied natural gas (LNG). That’s what has allowed it to shape a foreign policy completely independent from the House of Saud. Add to it that Qatar’s fabulous gas wealth yields from the massive offshore North Field, shared with Iran (who controls what it calls South Pars).

There’s been speculation, obviously unconfirmed by Tehran and Doha, that Iran and Qatar may have reached an agreement on sharing the rights for a gas pipeline from North Dome/South Pars to the eastern Mediterranean in Syria, as long as Doha stops supporting al-Nusra.

Were that to happen, it would signal the spectacular closure of one of the key motives for the Syrian tragedy. The Obama administration had fully approved a Qatar to Turkey – via Saudi Arabia and Syria – gas pipeline as a means of trying to undermine Gazprom. It took a lot of dead bodies and horrific destruction for Doha to realize Moscow would never allow it.

Thus Qatar’s strategic pivot towards Russia – materialized, for instance, via Qatar’s sovereign wealth fund investing $2.7 billion in Rosneft. This may be spelling out, in the medium term, a Qatar way more amenable to the Russia-Iran-Syria connection. Considering that Qatar hosts CENTCOM and is home to Al-‘Udayd, the largest US military base in the Middle East, that certainly does not go down very well at the Pentagon.

As far as the US game is concerned, it’s terminally naïve to believe Washington would not have provided a green light to its Saudi satrap to go after Doha.

Add to it Qatar opening the first yuan clearing center in the Middle East; that’s something that did not go down well with financial Masters of the Universe. In parallel, the much-lauded Trump $100 billion weapons deal announced in Riyadh may have been devised in exchange for the House of Saud delaying as long as possible Chinese oil payments in yuan that would bypass the petrodollar.

To weave conspiracy theories is an idle undertaking. “T.Rex” Tillerson, from his ExxonMobil days, knows the Qatari leadership quite well. And so does “Mad Dog” Mattis, former head of CENTCOM. Watch them; how they act in the follow-up will unveil at least some layers of the current shadow play – and whether the whole charade packs way more punch than mere House of Saud desperation.