Conditions in Gaza are worsening, with grave consequences for both human health and the environment due to untreated wastewater. Worse still, Israel has announced it will cut the electricity it supplies to Gaza by nearly half. 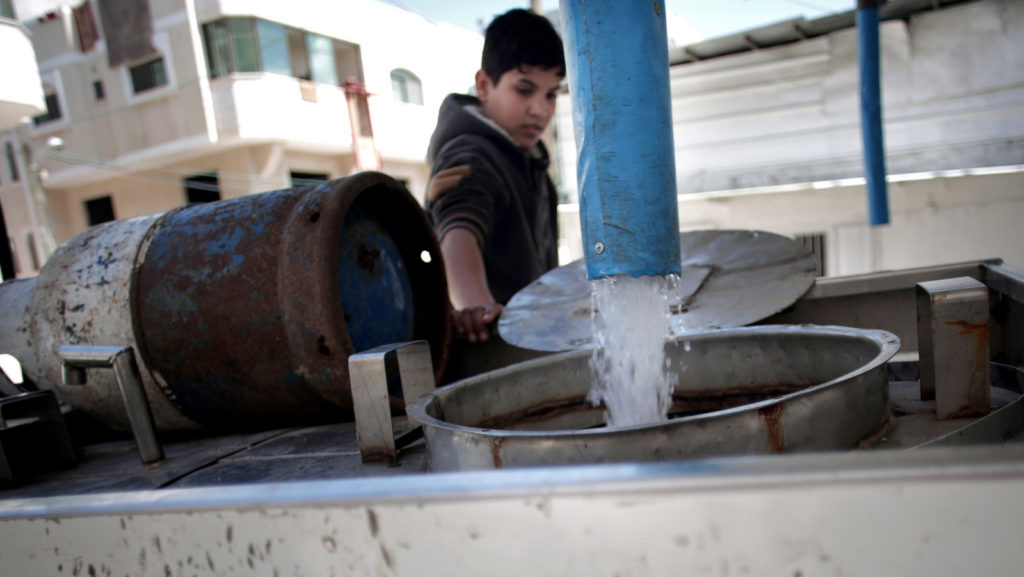 A Palestinian boy fills tankers with drinking water for sale at a drinking water station in Gaza City. Poor sewage treatment is a feature of life in Gaza, a result of infrastructure damaged during wars with Israel and a chronic shortage of electricity to run wastewater plants.
(AP/Khalil Hamra)

15 Jun 2017 — Due to the myriad of highly publicized conflicts in the Middle East – from Qatar’s current diplomatic crisis to the battle against Daesh (ISIS) in Syria and Iraq – many other crises in the region have slipped under the international radar. One such crisis has been taking place in Palestine’s Gaza Strip for years, entering a new phase in mid-April when Palestine’s only functioning power plant ran out of fuel.

The plant’s closure has meant that Gaza – home to approximately 2 million people and the largest open-air prison in the world– must rely on electricity supplied by Israel and Egypt. But both of these nations are behind a long-running border blockade that has made power shortages in Gaza a common occurrence in recent years and also prevented much-needed humanitarian aid from reaching its residents. The blockade has worsened poverty in Gaza as well, due to an Israel-imposed blockade on exports that has left as many as 80 percent of its residents dependent on humanitarian aid, according to international groups.

However, one of the most overlooked consequences of the power outage is quickly mushrooming into both an environmental and human health crisis. With electricity in Gaza incredibly scant, it has become impossible to continue treating the wastewater of Gaza City. A recent UN report stated that more than 110 million liters of wastewater are pouring into the Mediterranean Sea every day as a result.

This is not the first time Gaza has been threatened by an inability to manage its wastewater. Repeated wars waged by Israel have damaged Gaza’s infrastructure and rebuilding has been difficult. Maher Salem, the director general of water and sanitation in Gaza, told Middle East Eye that “Every three or four years, a massive war is waged on Gaza, destroying most of the infrastructure and leaving more than two million tons of concrete in the streets. So we cancel all our plans and [development] projects to face the consequences of the war.”

Related: Murder In The Mediterranean – The Perils Of Fishing In Gaza

One of the most notable examples was Israel’s war in Gaza in 2014, known as “Operation Protective Edge.” Though lasting only 50 days, the conflict killed 2,200 Palestinians, including 1,492 civilians. During this military campaign, Israel specifically targeted Gaza’s power plants and sewage treatment facilities. After the conflict, reconstruction costs were estimated at $6 billion, but a lack of funds made rebuilding largely impossible.

The current crisis in Gaza has caused great damage to the local environment. In June, the Palestinian Environmental Quality Authority warned that nearly half of Gaza’s shoreline had become polluted by raw and partially treated sewage due to the power outages. But many Gaza residents have refused to stop going to the beach, citing it as their only respite from the increasingly difficult living conditions they now endure.

Dr. Ahmed Hilles, environmental awareness director at the Environmental Quality Authority, told Middle East Eye this could pose a major risk to human health and marine life, as the sewage’s presence could trigger the spread of deadly diseases, such as typhoid and cholera. With the ongoing border blockade and the impact of the power outages on the Gaza health system, an outbreak of such deadly waterborne diseases could quickly reach pandemic levels within the besieged strip and could contaminate the entire region’s drinking water.

Despite the clear and present danger to civilians in Gaza, the crisis is set to worsen, largely thanks to political maneuvering by the Palestinian Authority (PA), which lost control over Gaza to Hamas in 2007 after the latter took over one year after it won elections. In a bid to “put pressure” on Hamas, President Mahmoud Abbas of the PA has requested that Israel reduce the amount of electricity that it provides to the Gaza Strip by as much as 40 percent. The Israeli cabinet has since obliged.

Israel currently provides 125 megawatts of power to Gaza, for which it charges the PA $11 million a month.

While the worsening of the power outages is intended to pressure Gaza’s current leadership, it will undoubtedly be the strip’s civilians who will bear the brunt of the loss of power.