Two technologies may be on the verge of surpassing even the most powerful digital computers in a year or so, but key challenges remain unsolved. 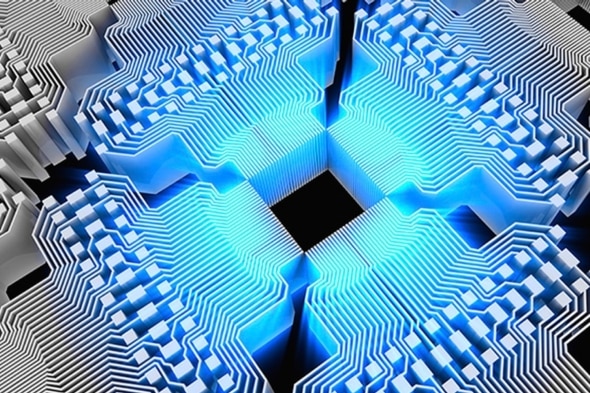 5 Jul 2017 – Scientists have long dreamed of developing quantum computers, machines that rely on arcane laws of physics to perform tasks far beyond the capability of today’s strongest supercomputers. In theory such a machine could create mathematical models too complex for standard computers, vastly extending the range and accuracy of weather forecasts and financial market predictions, among other things. They could simulate physical processes such as photosynthesis, opening new frontiers in green energy. Quantum computing could also jolt artificial intelligence to a vastly higher level of sophistication: If IBM’s Watson can already win at Jeopardy! and make some medical diagnoses, imagine what an enormously smarter version could do.

But to realize those visions, scientists first have to figure out how to actually build a quantum computer that can perform more than the simplest operations. They are now getting closer than ever, with IBM in May announcing its most complex quantum system so far and Google saying it is on track this year to unveil a processor with so-called “quantum supremacy”—capabilities no conventional computer can match.

Small systems exist, but the next steps in the race to make them bigger will have to determine whether quantum computers can deliver on their potential. Scientists and industry players have focused largely on one of two approaches. One cools loops of wire to near –273.15 degrees Celsius, or absolute zero, turning them into superconductors where current flows with virtually no resistance. The other relies on trapped ions—charged atoms of the rare earth element ytterbium held in place in a vacuum chamber by laser beams and manipulated by other lasers. The oscillating charges (in both the wires and the trapped ions) function as quantum bits, or “qubits,” which can be harnessed to carry out the computer’s operations.

The trick to either approach is figuring out how to get from already demonstrated systems—containing just a few qubits—to ones that can handle the hundreds or thousands required for the kind of heavy lifting that quantum technology seems to promise. Last year IBM made a five-qubit quantum processor available to developers, researchers and programmers for experimentation via its cloud portal. The company has made significant progress since then, revealing in May that it has upgraded its cloud-based quantum computer to a 16-qubit processor—and created a more tightly engineered 17-qubit processor that could be the basis for commercial systems. Both are based on the wire-loop superconducting circuits, as is Google’s 20-qubit processor, which the company announced at a conference in Munich, Germany, on June 22. Alan Ho, an engineer in Google’s Quantum Artificial Intelligence Lab, told the conference his company expects to achieve quantum supremacy with a 49-qubit chip by the end of this year.

Those numbers may not seem impressive. But a qubit is much more powerful than the kind of bit that serves as the smallest unit of data in a conventional computer. Those bits are based on the flow of electrical current, and make up the digital language in which all computing functions: “Off” means 0 and “on” means 1, and those two states encode all of the computer’s operations. Qubits, however, are not based on “yes/no” electrical switches—but rather on a particle’s quantum properties, such as the direction in which an electron spins. And in the quantum world a particle can simultaneously exist in a variety of states more complex than simply on/off—a phenomenon known as superposition. “You can have heads, you can have tails, but you can also have any weighted superposition. You can have 70-30 heads-tails,” says Christopher Monroe, a physicist at the University of Maryland, College Park, and founder of IonQ, a start-up working on building a quantum computer with trapped ions.

The more-than-binary ability to occupy multiple states at once allows qubits to perform many calculations simultaneously, vastly magnifying their computing power. That power grows exponentially with the number of qubits. So at somewhere around 49 or 50 qubits, quantum computers reach the equivalent of about 10 quadrillion bits and become capable of calculations no classical computer could ever match, says John Preskill, a theoretical physicist at California Institute of Technology. “Whether they will be doing useful things is a different question,” he says.

Both superconducting circuits and trapped ions have a good shot at hitting that fiftyish-qubit threshold, says Jerry Chow, manager of experimental quantum computing at IBM T. J. Watson Research Center in Yorktown Heights, N.Y. Conventional thinking would suggest that more qubits means more power—but Chow notes “it’s not just about the number of qubits.” He is more focused on the number and quality of calculations the machine can perform, a metric he calls “quantum volume.” That includes additional factors such as how fast the qubits can perform the calculations and how well they avoid or correct for errors that can creep in. Some of those factors can work against one another; adding more qubits, for instance, can increase the rate of errors as information passes down the line from one qubit to another. “As a community we should all be focusing—no matter whether we’re working on superconducting qubits or trapped ions or whatever—on pushing this quantum volume higher and higher so we can really make more and more powerful quantum processors and do things that we never thought of,” Chow says.

Monroe recently compared his five-qubit trapped ion system with IBM’s five-qubit processor by running the same simple algorithms on both, and found the performance comparable. The biggest difference, he says, is that the trapped ions are all connected to one another via electromagnetic forces: Wiggle one ion in a string of 30 and every other ion reacts, making it easy to quickly and accurately pass information among them. In the wire-loop superconductor circuit only some qubits are connected, which makes passing information a slower process that can introduce errors.

One advantage of superconducting circuits is that they are easy to build using the same processes that make computer chips. They perform a computer’s basic logic gate operations—that is, adding, subtracting or otherwise manipulating the bits—in billionths of a second. On the other hand, qubits in this type of system hold their quantum state for only milliseconds—thousandths of a second—so any operation must be completed in that time.

Trapped ions, by contrast, retain their quantum states for many seconds—sometimes even minutes or hours. But the logic gates in such a system run about 1,000 times slower than in superconductor-based quantum computing. That speed reduction probably does not matter in simple operations with just a few qubits, Monroe says. But it could become a problem for getting an answer in a reasonable amount of time as the number of qubits increases. For superconducting qubits, rising numbers may mean a struggle to connect them together.

And increasing the number of qubits, no matter what technology they are used with, makes it harder to connect and manipulate them—because that must be done while keeping them isolated from the rest of the world so they will maintain their quantum states. The more atoms or electrons are grouped together in large numbers, the more the rules of classical physics take over—and the less significant the quantum properties of the individual atoms become to how the whole system behaves. “When you make a quantum system big, it becomes less quantum,” Monroe says.

Chow thinks quantum computers will become powerful enough to do at least something beyond the capability of classical computers—possibly a simulation in quantum chemistry—within about five years. Monroe says it is reasonable to expect systems containing a few thousand qubits in a decade or so. To some extent, Monroe says, researchers will not know what they will be able to do with such systems until they figure out how to build them.

Preskill, who is 64, says he thinks he will live long enough to see quantum computers have an impact on society in the way the internet and smartphones have—although he cannot predict exactly what that impact will be. “These quantum systems kind of speak a language that digital systems don’t speak,” he says. “We know from history that we just don’t have the imagination to anticipate where new information technologies can carry us.”