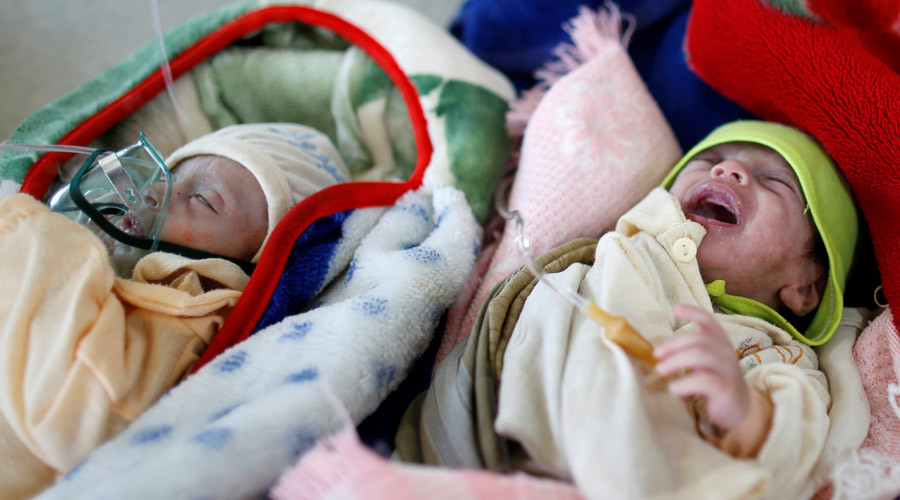 Malnourished twin brothers lie on a bed at the al-Sabeen hospital in Sanaa.
© Khaled Abdullah / Reuters

11 Aug 2017 – While few will pause upon hearing that Yemen was bombed yet again by Saudi Arabia’s war coalition, thus leading to many deaths, the kingdom’s propensity to concentrate its firepower on civilians has become a little hard to stomach.

Riyadh turned child killer this August when it sanctioned an airstrike on Sa’ada under the pretense of combating those infamous “Houthi rebels” many news agencies insist on labeling as political infidels to promote a binary whose foundations only exist in the mind of its maker – namely Saudi Arabia.

Yemen’s rebels, those men, and women who banded together against the aggression of a foreign invader have a right to their resistance. We may not like their ideas, their slogans, or even the manner of their speech, but it does not take away from the fact that a nation’s sovereignty and territorial integrity, in this particular case Yemen, is sanctified under international law.

On the brink of 'catastrophe': Yemen’s national blood bank on verge of closing after losing Western funding https://t.co/Rhd5k2PSlp pic.twitter.com/mRODs0PlYs

It would be ludicrous for any of us to argue against self-defense when we have proclaimed our right to combat terrorism on that very premise. It would be intellectually hypocritical to deny Yemen its freedom on account its invader can afford better media coverage, and stronger political friendships to disguise its crimes under a veneer of respectability.

Yemen is into the third year of a brutal conflict with Saudi Arabia, and millions of innocents stand not only in the line of fire but before death’s doors for their murder was architected in Riyadh’s palaces.

Yemen has been made to starve so its people’s will to resist could be tamed.

Yemen’s civilian infrastructures: its hospitals, water system, electricity grid, food warehouses, schools, market places, libraries, mosques, and museums were blown to the four winds so a people would be taught whose will is greater in the Arabian Peninsula and whose name [Al-Saud] deserves to be imprinted further onto the region.

Yemen’s fields have been bombed, gassed and otherwise made barren. Its seaports turned to ashes and fishermen targeted so not even the sea could offer relief from hunger. Aid has been profiled according to communities’ faith so that Saudi Arabia could have its victory against those it calls “rejectors”: Shia Muslims.

As experts continue to argue legitimacy, political necessity, and geopolitical pragmatism so that, we, the public, would not question the how and why of Yemen’s war, lives are being lost. A nation’s future is being crushed, and most despicable of all, children are being held hostage to Riyadh’s game of thrones.

Seyed Hassan Ali al-Emad, the founder and head of Yemen’s new rising political party, the Future of Justice spoke to me in an exclusive interview of the horrors civilians have been made to endure to appease al-Saud’s hunger for domination.

“Cholera has become Saudi Arabia’s latest weapon of war against Yemen’s children. Communities have no recourse against the disease, no access to food, medicine or clean water.

Of course, cholera is ravaging my country. It was architected so it would. Yemen’s humanitarian crisis needs not be if only food and medicine were allowed back in.”

On all the above we seldom dwell. Maybe the magnitude of our impairment prevents us from looking upon the crimes we allowed to go unspoken, and unchallenged. When I say unchallenged, I’m not calling for more grandiose statements from our heads of state. I would much rather our world institutions put Saudi Arabia in the booth of the accused and justice be served – anything else would be a farce and an insult to those families who lost so much more than we could ever imagine to Riyadh’s military rage.

Maybe we all could do with a reality check here and consider that behind every casualty lies a life, a family, and a future interrupted. Our propensity to express outrage according to socio-political factors and geography has become dangerous liabilities since they have empowered mass-murderers. What else should we call Saudi Arabia?

On the kingdom’s recent killing spree, the Independent wrote:

“Three women and six children from the same family were killed as they slept in the dawn airstrike by the Saudi-led coalition opposing the Houthi rebels in the Yemeni civil war.”

This is what Saudi Arabia’s war rationale looks like from up close: the random slaughter of the innocent.

“While these new incidents are still being investigated by the Office of the High Commissioner for Human Rights, they are an example of the brutality in which the conflict is being conducted. All parties to the conflict continue to show a disregard for the protection of civilians and the principle of distinction between civilians and combatants in the conduct of hostilities. As I have said before, even wars have rules, and such rules must be respected.”

It is unlikely Mr. McGoldrick’s words, however sincerely he meant them, will translate into any real actions on the ground, because Yemen does not have a powerful lobby to speak on its behalf. Yemen’s Resistance Movement is stuck its back against the wall, caught in the web of a false binary that labeled and criminalized its people out of mainstream politics.

Yemen’s Resistance has been branded under its invaders’ narrative.

This is how the Independent puts it:

“Yemen has been torn apart by the civil war in which the exiled government of President Abdrabbuh Mansour Hadi, supported by the Saudi-led coalition, is fighting the Iran-allied Houthi group. The Houthi group hails from the Zaidi branch of Shia Islam and controls much of the north of the country.”

How grand the arrogant pen of our media, turning truths on their heads so that people’s faith and their calls for political self-determination would be made invalid by the manners of their prayers, and the origins of their kin. Why bother with facts when fairy tales can be weaved and war crimes excused.

Has anyone bothered to look under Yemen’s burning rubles to notice how many civilians were claimed to al-Saud’s crusade before throwing sectarian adjectives around? Is freedom a right or a privilege reserved to a certain elite? Because from where I’m sitting it sounded almost as if mainstream media was trying to rationalize murder by waving religious bias and ethnocentrism.

One last thing: if religious labels matter that much why have we failed to give Saudi Arabia its own? Or maybe that would be rude.

Read more: Yemen war pushes country ‘towards the edge of a cliff’ – UN

Catherine Shakdam is a political analyst, writer and commentator for the Middle East with a special focus on radical movements and Yemen. A regular pundit on RT and other networks her work has appeared in major publications: MintPress, Foreign Policy Journal, Mehr News and many others. Director of Programs at the Shafaqna Institute for Middle Eastern Studies, Catherine is also the co-founder of Veritas Consulting. She is the author of Arabia’s Rising – Under the Banner of the First Imam.