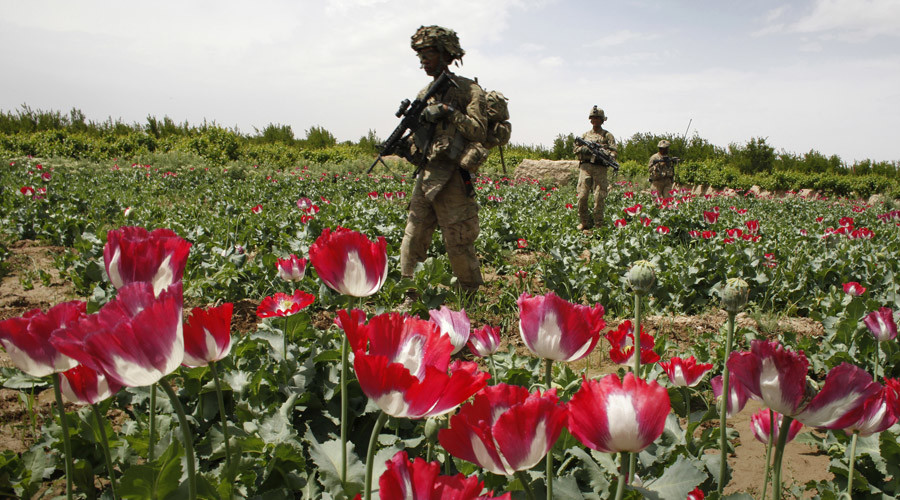 U.S. Army soldiers walk through a poppy field near the village of Sami Kalache in the Arghandab Valley north of Kandahar. © Bob Strong / Reuters. FILE PHOTO

23 Aug 2017 – The CIA is also overjoyed because its black-ops budget – which is tied to the exponential growth of opium production in Afghanistan – is now secured possibly for another 20-50 years, claims Mike Raddie, co-editor of online site BSNews.

The announcement on US strategy in Afghanistan comes as Donald Trump shakes up his inner circle: chief strategist, Steve Bannon, has become the latest to head for the exit.

The US military said that in a matter of days additional US troops could be deployed to Afghanistan, following President Trump’s speech on a new strategy for the region.

RT: What do you make of Trump expanding military intervention in Afghanistan and not providing any time frame for ending the war? Do you think Trump’s new strategy will work?

Mike Raddie: Obviously, there is no end, and that suits the neocon generals perfectly well. His policy flip-flop maybe, this is in the tradition of all US presidents going back to Jimmy Carter in 1979. They have all intervened and interfered with the running of Afghanistan, whether it be overtly or covertly, whether it is a full-fledged intervention, military attack or arming jihadist groups like the mujaheddin. So, it is not a surprise to me. The neocons and the military industrial establishment are overjoyed about this because it means that their baby – the war in Afghanistan, that unwinnable 16-year war in Afghanistan – will continue and it may continue for decades.

The CIA is also overjoyed because its black-ops budget – which is tied obviously to the exponential growth of opium production in Afghanistan, which is fueling the heroin epidemic across the West – that is now secured for another possibly 20-50 years. He has jumped straight back into the swamp. Far from clearing it, he has jumped into this swamp, and people now can see his true colors. If they couldn’t already after the indiscriminate bombing of Syria recently.

This is not surprising to me. It is not going to win; it is not going to succeed at all. If there is an insurgency in Afghanistan at the moment, it is because of the military occupation. We should remember that NATO forces never left there – whether it be President Bush or President Obama – this is a continuation of long-held policy.

Even if Trump "flip-flops & goes along with the neocons… he’s not going to win them over" – Ron Paul https://t.co/KjqHDE0mV3

RT: The Taliban warns more US troops will mean more Pentagon casualties. Could Trump’s announcement spark an increase in the violence?

MK: I believe so. And it won’t just be the Taliban. There will be ISIS that will be fueling what will probably become a full-fledged civil war in the country. ISIS has been pushed out of Syria and pushed out of Iraq. They need somewhere to go because as a proxy army they suit the Pentagon perfectly well, and they are used extensively throughout the world. And if you look back in past conflicts – not only to fight the Soviet Empire in Afghanistan – but they were deployed over in the Balkans, and they have been deployed recently in places as far as Indonesia. So, having a proxy army that you can call upon is really useful. They are going to need some kind of place somewhere in a country that doesn’t have much stability. So, Afghanistan is the likely place. That has been the place since 1979 and throughout the 1980s.

This is a question with lots of repercussions – socio-economic problems and security problems, not just for Afghanistan but Iran, Pakistan, Europe, China, Russia and, I could say, the globe. The Taliban is justifying its war of insurgency on the pretext of foreign deployment in Afghanistan. And they have reiterated that they will continue the fight more fervently than ever because of this decision by Trump that would actually increase the number of US contingent forces in the country around 50 percent. As they have now 8,700 contingent forces in the country and Trump is reportedly trying to add another 4,000 troops …That means continued war of insurgency in Afghanistan, which means slimmer hopes for peace – Seyyed Mostafa Khoshcheshm, political analyst, commented on the topic

I think things are going to get worse for the people of Afghanistan, especially civilians. We are going to see far more casualties there. Who knows how many have been killed in the last 16 years. Things are not going to improve at all for the civilians of Afghanistan. I think the country, in general, is going to continue to spiral out of control.

One part of this policy that kind of also makes sense with regards to the corporate establishment over America and the West in general, is that it is part of a wider economic war against Russia, Iran, and China. China was doing great economic ties with countries in Northern Africa and also in Afghanistan. That has been put to an end because of the interventions and the regime change operations in North Africa like Libya; all the economic ties that China was developing with Afghanistan are now all at risk. The one trillion dollar worth of rich mineral resources under the ground in Afghanistan probably isn’t going to get developed, and it isn’t going to benefit the people of the country. That is all part of the US strategy toward its perceived enemies.