The Atomic Bombing of Hiroshima and Nagasaki 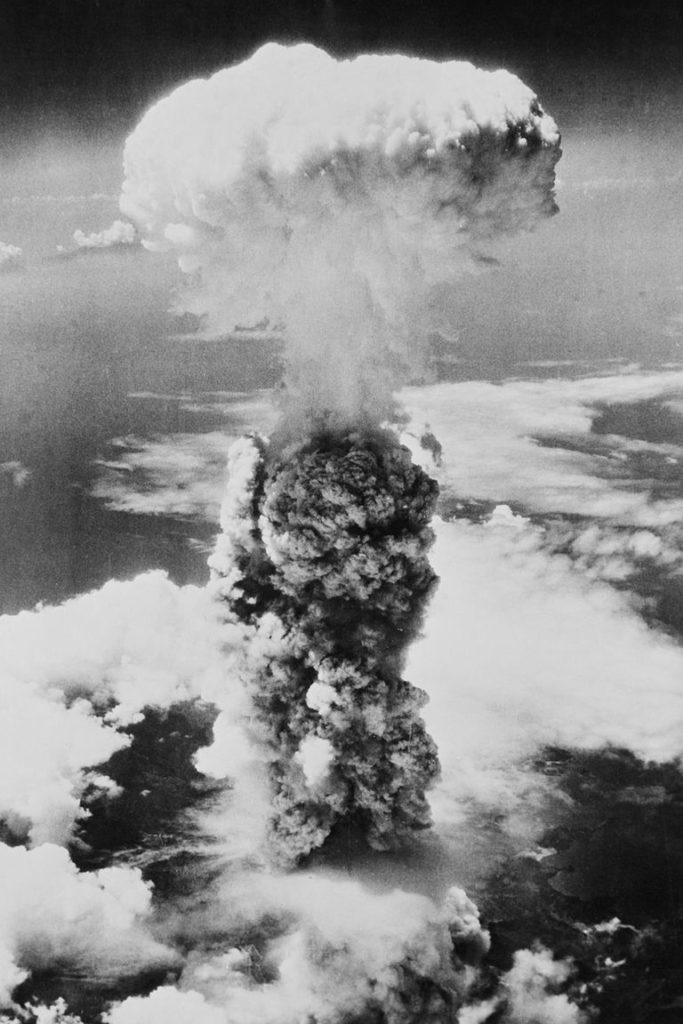 At the time this photo was made, smoke billowed 20,000 feet above Hiroshima while smoke from the burst of the first atomic bomb had spread over 10,000 feet on the target at the base of the rising column. (August 6, 1945).
Superstock/Getty Images

Attempting to bring an earlier end to World War II, U.S. President Harry Truman made the fateful decision to drop a massive atomic bomb on the Japanese city of Hiroshima. On August 6, 1945, this atomic bomb, known as “Little Boy,” flattened the city, killing at least 70,000 people that day and tens of thousands more from radiation poisoning.

While Japan was still trying to comprehend this devastation, the United States dropped another atomic bomb. This bomb, nicknamed “Fat Man,” was dropped on the Japanese city of Nagasaki, killing an estimated 40,000 people immediately and another 20,000 to 40,000 in the months following the explosion.

The Enola Gay Heads to Hiroshima

Colonel Paul Tibbets, the pilot, nicknamed the B-29 the “Enola Gay” after his mother. Just before take-off, the plane’s nickname was painted on its side.

The Enola Gay was a B-29 Superfortress (aircraft 44-86292), part of the 509th Composite Group. In order to carry such a heavy load as an atomic bomb, the Enola Gay was modified: new propellers, stronger engines, and faster opening bomb bay doors. (Only 15 B-29s underwent this modification.)

Even though it had been modified, the plane still had to use the full runway to gain the necessary speed, thus it did not lift off until very near the water’s edge.1

The Enola Gay was escorted by two other bombers that carried cameras and a variety of measuring devices. Three other planes had left earlier in order to ascertain the weather conditions over the possible targets.

The Atomic Bomb Known as Little Boy Is on Board

On a hook in the ceiling of the plane, hung the ten-foot atomic bomb, “Little Boy.” Navy Captain William S. Parsons (“Deak”), chief of the Ordnance Division in the “Manhattan Project,” was the Enola Gay’s weaponeer. Since Parsons had been instrumental in the development of the bomb, he was now responsible for arming the bomb while in-flight.

Approximately 15 minutes into the flight (3:00 a.m.), Parsons began to arm the atomic bomb; it took him 15 minutes. Parsons thought while arming “Little Boy”: “I knew the Japs were in for it, but I felt no particular emotion about it.”2

“Little Boy” was created using uranium-235, a radioactive isotope of uranium. This uranium-235 atomic bomb, a product of $2 billion of research, had never been tested. Nor had any atomic bomb yet been dropped from a plane.

Some scientists and politicians pushed for not warning Japan of the bombing in order to save face in case the bomb malfunctioned.

There had been four cities chosen as possible targets: Hiroshima, Kokura, Nagasaki, and Niigata (Kyoto was the first choice until it was removed from the list by Secretary of War Henry L. Stimson). The cities were chosen because they had been relatively untouched during the war.

The Target Committee wanted the first bomb to be “sufficiently spectacular for the importance of the weapon to be internationally recognized when publicity on it was released.”3

On August 6, 1945, the first choice target, Hiroshima, was having clear weather. At 8:15 a.m. (local time), the Enola Gay’s door sprang open and dropped “Little Boy.” The bomb exploded 1,900 feet above the city and only missed the target, the Aioi Bridge, by approximately 800 feet.

The Explosion at Hiroshima

Staff Sergeant George Caron, the tail gunner, described what he saw: “The mushroom cloud itself was a spectacular sight, a bubbling mass of purple-gray smoke and you could see it had a red core in it and everything was burning inside. . . . It looked like lava or molasses covering a whole city. . . .”4 The cloud is estimated to have reached a height of 40,000 feet.

Captain Robert Lewis, the co-pilot, stated, “Where we had seen a clear city two minutes before, we could no longer see the city.

We could see smoke and fires creeping up the sides of the mountains.”5

Two-thirds of Hiroshima was destroyed. Within three miles of the explosion, 60,000 of the 90,000 buildings were demolished. Clay roof tiles had melted together. Shadows had imprinted on buildings and other hard surfaces. Metal and stone had melted.

Unlike other bombing raids, the goal for this raid had not been a military installation but rather an entire city. The atomic bomb that exploded over Hiroshima killed civilian women and children in addition to soldiers.

Hiroshima’s population has been estimated at 350,000; approximately 70,000 died immediately from the explosion and another 70,000 died from radiation within five years.

A survivor described the damage to people:

The appearance of people was . . . well, they all had skin blackened by burns. . . . They had no hair because their hair was burned, and at a glance you couldn’t tell whether you were looking at them from in front or in back. . . . They held their arms bent [forward] like this . . . and their skin – not only on their hands, but on their faces and bodies too – hung down. . . . If there had been only one or two such people . . . perhaps I would not have had such a strong impression. But wherever I walked I met these people. . . . Many of them died along the road – I can still picture them in my mind — like walking ghosts. 6

The Atomic Bombing of Nagasaki

While the people of Japan tried to comprehend the devastation in Hiroshima, the United States was preparing a second bombing mission. The second run was not delayed in order to give Japan time to surrender, but was waiting only for a sufficient amount of plutonium-239 for the atomic bomb.

The first choice target for this bombing run had been Kokura. Since the haze over Kokura prevented the sighting of the bombing target, Bock’s Car continued on to its second target.

The pumpkin field in front of the house was blown clean. Nothing was left of the whole thick crop, except that in place of the pumpkins there was a woman’s head. I looked at the face to see if I knew her. It was a woman of about forty. She must have been from another part of town — I had never seen her around here. A gold tooth gleamed in the wide-open mouth. A handful of singed hair hung down from the left temple over her cheek, dangling in her mouth. Her eyelids were drawn up, showing black holes where the eyes had been burned out. . . . She had probably looked square into the flash and gotten her eyeballs burned.

Approximately 40 percent of Nagasaki was destroyed. Luckily for many civilians living in Nagasaki, though this atomic bomb was considered much stronger than the one exploded over Hiroshima, the terrain of Nagasaki prevented the bomb from doing as much damage.

I saw the atom bomb. I was four then. I remember the cicadas chirping. The atom bomb was the last thing that happened in the war and no more bad things have happened since then, but I don’t have my Mummy any more. So even if it isn’t bad any more, I’m not happy.
— Kayano Nagai, survivor 8

Nagai, Takashi. We of Nagasaki: The Story of Survivors in an Atomic Wasteland. New York: Duell, Sloan and Pearce, 1964.

Jen Rosenberg is a historian who has had a lifelong passion for history. She has been a fact-checker for several books and a writer for both online and offline publications.