The Corruption of Modern Academic Medicine — How Your Doctor Was Bought

27 Jul 2017 – Many doctors are genuinely puzzled why much of the general public does not trust what they say. For example, there’s the GOOP story. Gwenyth Paltrow sells lots of scientifically iffy wellness products on her website, and there’s many doctors and ‘health professionals’ frothing at the mouth trying to ‘debunk’ her theories. But, in the end, GOOP is selling millions of dollars of product. The public has voted with its money, and it chooses Gwenyth over the doctors. Why?

Then, there’s the anti-vaxxers/ vaccine controversy. Once again, celebrities like Jenny McCarthy claim that vaccines cause autism. Many doctors are frothing at the mouth and loudly ‘debunking’ these theories. Despite these protestations, we have occasional mumps outbreaks where children have not been properly vaccinated. Again, the public has voted with its children, and it chooses Jenny over the doctors. Once again, why? 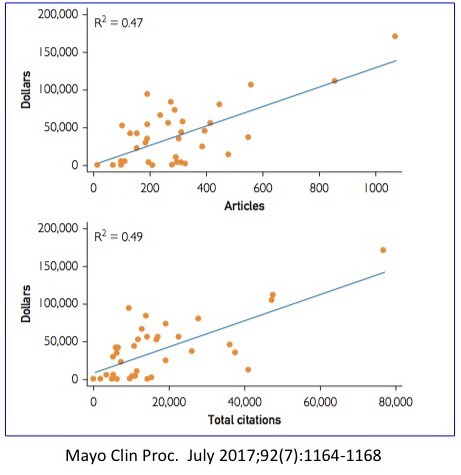 There’s also the ongoing statin controversy. These popular cholesterol lowering medications may have benefits in those with known cardiovascular disease, but are increasing prescribed for ‘primary prevention’, that is, in healthy people to prevent heart disease. While it sounds good, this ignores the fact that all medications have side effects and that the benefits in a lower risk population is by definition, much smaller. Taking a tablet to prevent a single episode of heart disease may mean treating hundreds or even thousands of people for decades unnecessarily.

Many doctors blame ignorance and the media for these phenomena, but this is simply a patronizing attitude. The truth is this. Many people simply do not believe doctors any more.

But why? The answer is $$$$. Simply, the public does not trust doctors because they know that many doctors, especially those in academic medicine and the universities are on the take. A terrific study from Dr. Vinay Prasad illustrates the problem precisely. He reviewed 37 ‘expert’ physicians who spoke on behalf of drug companies. Not surprisingly, they were all getting significant amounts of money from Big Pharma — a median of $39,316. These were not simply run of the mill doctors either.

There is a clear correlation between the number of articles they had written (or been cited) and the amount of money received. This means that these ‘experts’ are those professors and doctors at all the best universities all over the world. These are the doctors that lecture other doctors and medical students. In general, the more prominent a physician, the more money he is taking from industry. 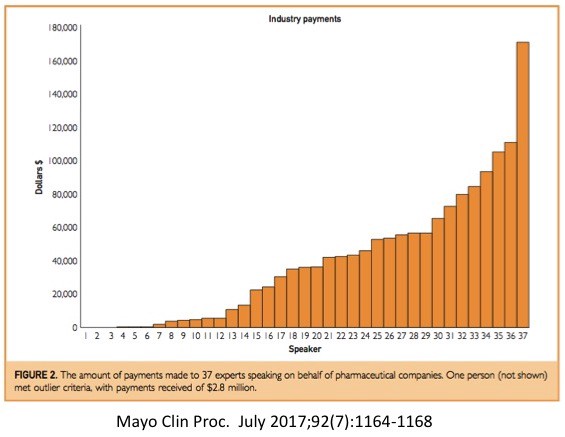 Some are receiving hundred of thousands of dollars. One was literally off the chart, claiming a ridiculous $2.8 million dollars from Big Pharma. $2.8 MILLION!!!

The sad part is that everybody recognizes the inherent conflict of interest. If a doctors is getting millions of dollars from a drug company, then there’s a good chance that his public opinion reflects this huge payment and is not an unbiased opinion. Further, doctors often try to hide this huge sponsorship from the public eye, making them far less believable.

For example, if LeBron James appears in a commercial for Sprite, we know that he is being paid for it. We aren’t exactly surprised if we find out that he probably rarely drinks sugary drinks, because, well, it’s bad for athletic performance and he’s not stupid. But LeBron never tries to hide his sponsorship, and may well be proud of it. That’s not the case with doctors. They try to obscure this fact everywhere they go. 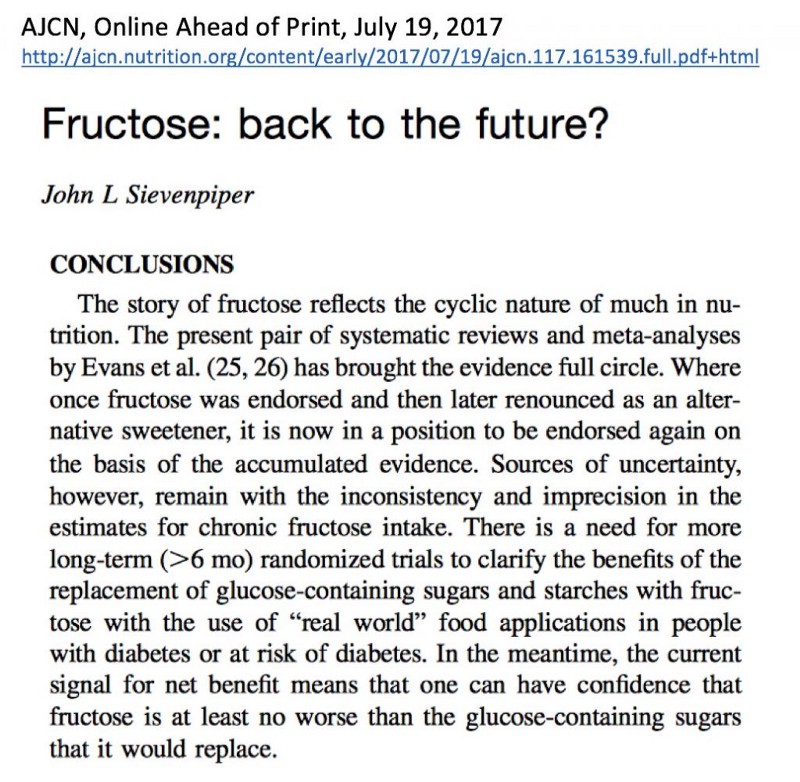 Let’s look at the sugar controversy. Here’s Dr. Sievenpiper, a physician at St. Michaels Hospital at the University of Toronto arguing that fructose and sugar are actually GOOD for you. WTF???

Everybody and their grandmother knows that sugar is not good for you. Even if you think it is only empty calories (it’s way worse than that), you’d have to be kind of an idiot to believe that fructose should be ‘endorsed again’ as healthy. But here’s Sievenpiper saying exactly that.

But he’s a doctor, isn’t he? Well, he’s also massively on the take from the Corn Refiners Association. The National Post’s headline says it all “Canadian researcher have received hundreds of thousands from soft-drink makers and the sugar industry“. Sievenpiper has written 22 studies or opinions in the last 3 years that, surprise surprise, claim that sugar is not the culprit. 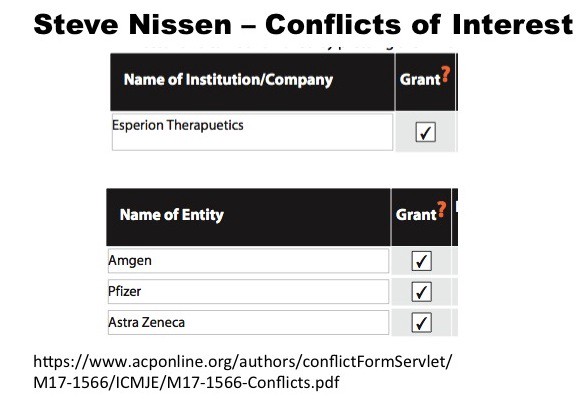 You could also look at the example of the statins. Dr. Aseem Malhotra, a leading cardiologist from the UK, along with Dr. Maryann Demasi and Dr. Robert Lustig, and who does not take any money from drug makers wrote an excellent commentary arguing that the cholesterol hypothesis is dead. In response, cardiologist Dr. Steven Nissen claimed that “internet-driven cults” were scaring people away from statins. Both are cardiologists. Who is right and who is wrong? The public has no way to know.

Oh, but let’s look at Dr. Nissen’s payments from Big Pharma. According to ProPublica, Dr. Nissen had scored a cool $80,000 payday from drug firms last year. Nice. Oh, right, further he received money from 3 of the biggest drug firms (Amgen, Pfizer, and Astra Zeneca) on the planet to do research and write papers. Dr. Nissen hysterically claims that cults are scaring people away from life saving statins and that if we listened to them, everybody would die. Funny, Dr. Nissen seems to be engaging in a lot of fear mongering himself to scare people into taking their (highly-profitable) medications. 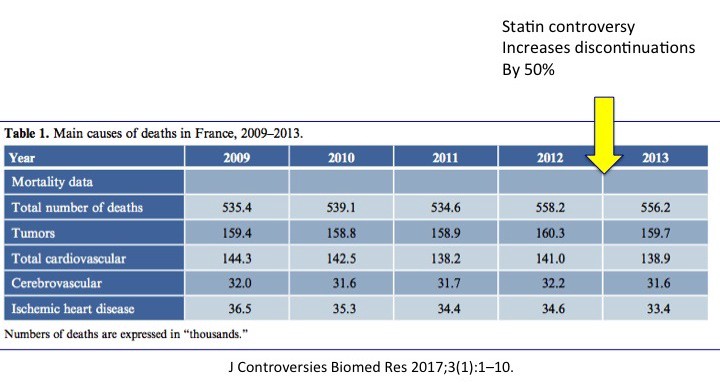 Is it true? Would people start dying in droves if they all stopped their statins? Well, this paper answers that question. In France, an intense statin controversy in 2013 drove discontinuations of that drug up by 50% compared to 2012 and 2011. Lots of people died as a result, right? Not at all

No ‘Health Tragedy’ occurred despite the hysterical hand-wringing of doctors. There were 2000 LESS deaths in 2013. For heart disease deaths, there were 1200 LESS deaths. Yes, you read that correctly. There were less deaths when people stopped their medication. I can’t say that one resulted from the other, but certainly the predicted disaster never happened. Once again, people are predicting disaster, as they did when Dr. Demasi produced her brave documentary ‘Heart of the Matter’. 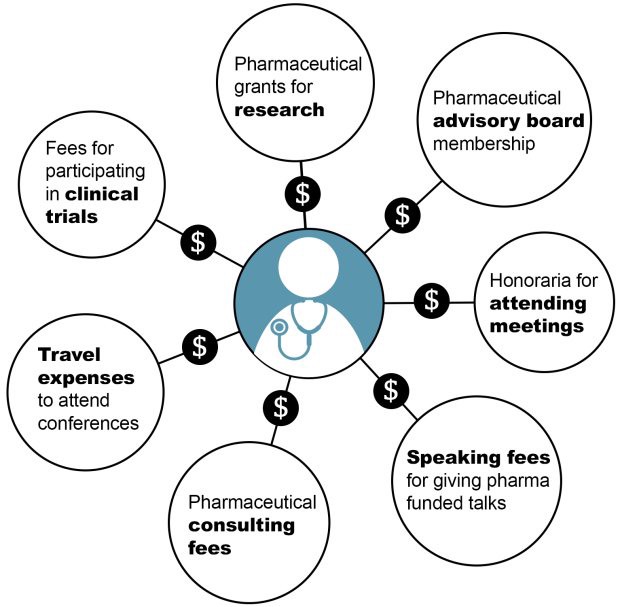 The general public is not stupid. They understand that many doctors are on the payroll of Big Pharma but are desperate to hide this fact. They understand that the people that should be the most expert — the university professors and the physicians at the teaching hospitals and the researchers who write the articles are the ones that are taking the most $$$. They’re trading their academic prestige for cold hard cash in a form of intellectual prostitution.

Of the 22 members of the Canadian Cardiovascular Society, 20 received money from Big Pharma. The CCS is responsible for writing all kinds of guidelines that doctors follow in the treatment of heart disease. Yet 91% of the doctors writing these influential guidelines are directly in the pay of Big Pharma. Not surprisingly, these guidelines heartily endorse the liberal use of statins. It should be in the drinking water! The very people who should be safe-guarding the public have sold them out.

Then, there’s the money being funneled in things like the impressive sounding Canadian Heart Research Centre, with many University of Toronto professors. This is really just a money-laundering operation of the pharmaceuticals. All the big drug companies pour millions of dollars into this ‘Research Centre’ which produces thinly disguised infomercials aimed at your local physician.

For example, consider this program from a similar organization. “Insulin in Diabetes” How exciting. Too bad that there is not a single study in the history of mankind that shows that insulin in type 2 diabetes improves health outcomes. Since 90% of diabetes is type 2, then this title implies a complete lie — that insulin benefits type 2 diabetes. 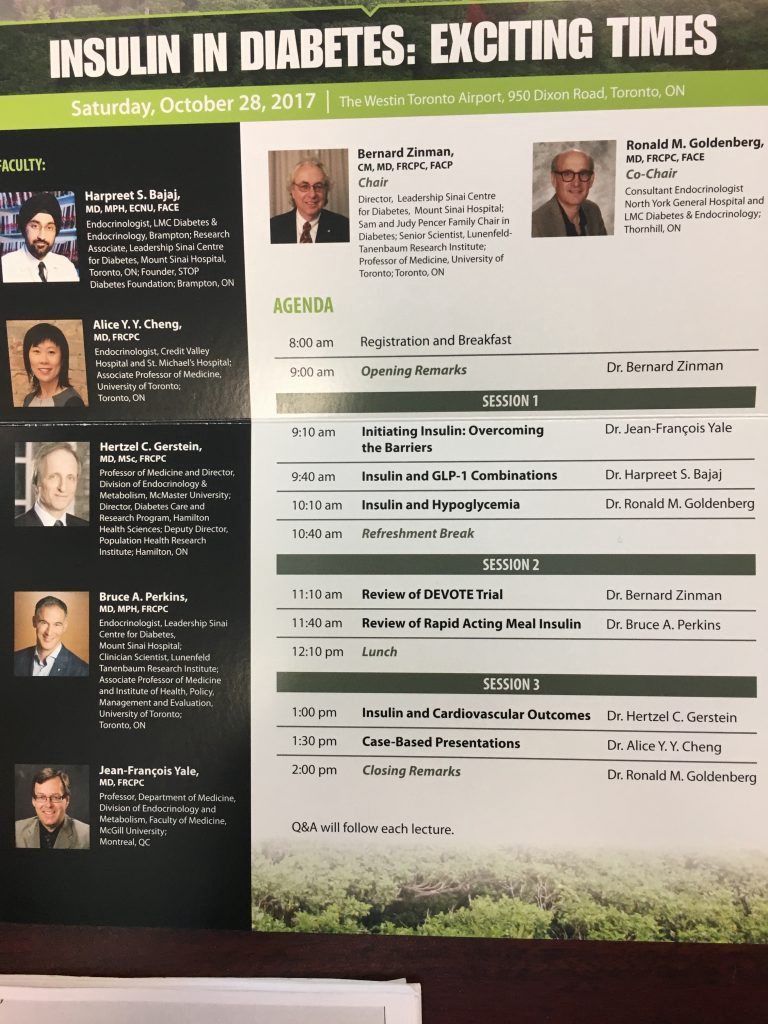 Did they all decide to give up their Saturday to educate GPs. Hardly. They are each taking thousands of dollars home while promoting obesity inducing insulin. Not a single lecture of this 8 hour program is devoted to proper diet or exercise. Nope. Drugs, drugs, drugs is what pays the private school bills. They are taking money from a cabal of insulin profiteers to deliver a biased, thinly disguised sales message at the behest of their pharmaceutical overlords.

Drug companies can pay these sham research organizations to put on these events (infomercials) and pretend they are supporting ‘research’. Money successfully laundered. It’s an open secret amongst the doctors. We all know that these things are not free to organize. Everybody gets paid.

For the GPs attending, there is free breakfast, lunch and snack. They take this tainted and biased presentation to heart, believing they are learning about the most recent developments in the field. They then pass this propaganda on to their patients in good faith, but bad medicine.

Of course, Big Pharma has bankrolled the entire thing to the tune of tens or hundreds of thousands of dollars. And they know they are getting a good return on their investment. The Journal of Clinical Oncology published an article which shows that in oncology (cancer), payments to doctors results in up to a 78% increase rate of prescription of medications.

So, why is the general public so mistrusting of doctors? Well, the public would have to be crazy to trust us, given the money sloshing around the system. But the fault is our own. A great first step is disclosure, as done in the USA and there is a movement in Canada for this, too. But that’s not enough. The only way to restore trust is to stop all these payments altogether. Honestly, is it really too much to ask that the ‘experts’ (American Heart Association, American Diabetes Association, Canadian Cardiovascular Society) that advise the public on the best drugs, the best diets do NOT take money from drug companies?