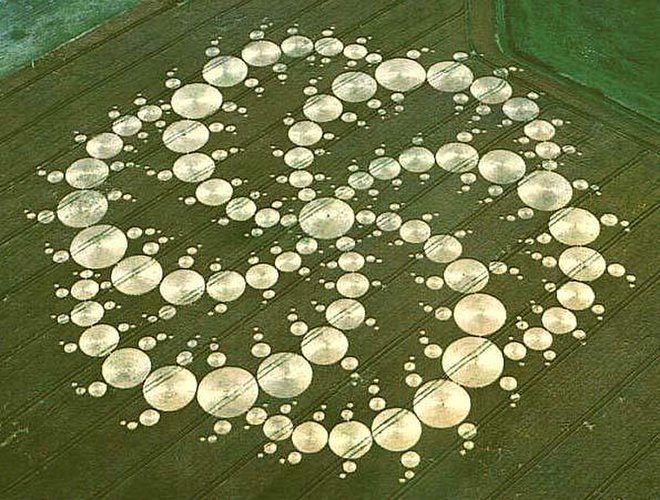 This massive 780-foot (238 meters) crop circle appeared in 2001 in the remote area of Milk Hill in Wiltshire, England. The elaborate design is composed of 409 circles that form a pattern called a double, or six-sided, triskelion, which is a motif consisting of three interlocking spirals.
Credit: Handy Marks | public domain

9 Jun 2017 – Crop circles — strange patterns that appear mysteriously overnight in farmers’ fields—provoke puzzlement, delight and intrigue among the press and public alike. The circles are mostly found in the United Kingdom, but have spread to dozens of countries around the world in past decades. The mystery has inspired countless books, blogs, fan groups, researchers (dubbed “cereologists”) and even Hollywood films.

Despite having been studied for decades, the question remains: Who — or what — is making them?

Many people believe that crop circles have been reported for centuries, a claim repeated in many books and websites devoted to the mystery. Their primary piece of evidence is a woodcut from 1678 that appears to show a field of oat stalks laid out in a circle. Some take this to be a first-hand eyewitness account of a crop circle, but a little historical investigation shows otherwise. 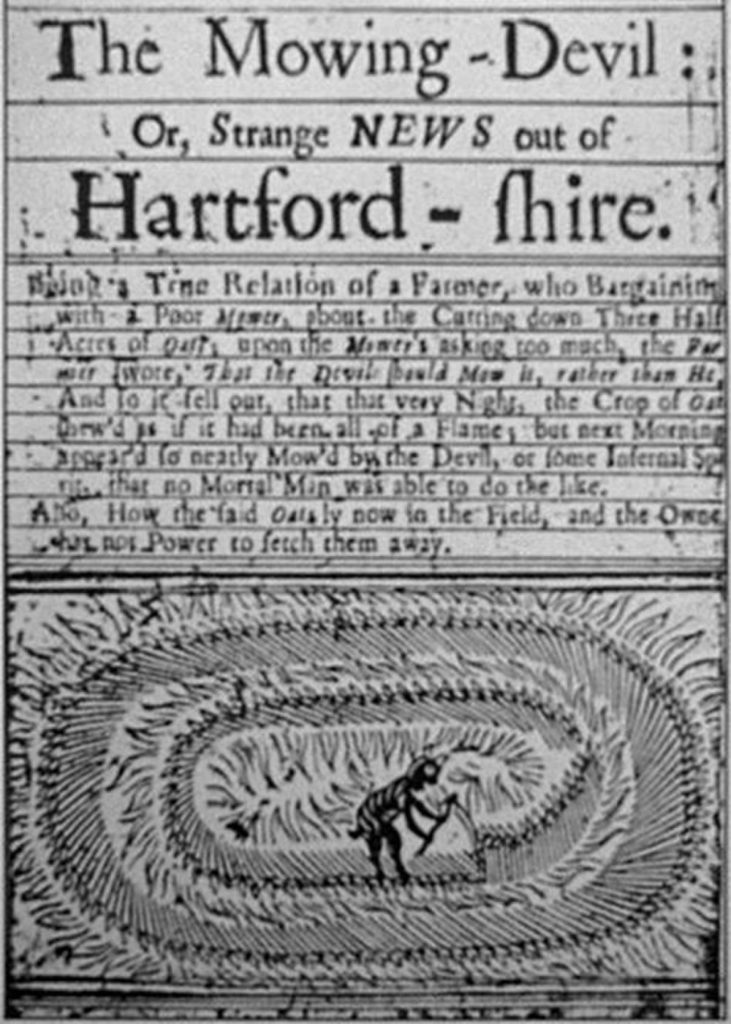 A woodcut pamphlet that some claim represents an early crop circle.

The woodcut actually illustrates what in folklore is called a “mowing devil” legend, in which an English farmer told a worker with whom he was feuding that he “would rather pay the Devil himself” to cut his oat field than pay the fee demanded. The source of the harvesting is not unknown or mysterious; it is indeed Satan himself, who — complete with signature horns and a tail — can be seen in the woodcut holding a scythe.

Some claim that the first crop circles (though they were not called that at the time) appeared near the small town of Tully, Australia. In 1966, a farmer said he saw a flying saucer rise up from a swampy area and fly away; when he went to investigate he saw a roughly circular area of debris and apparently flattened reeds and grass, which he assumed had been made by the alien spacecraft (but which police investigators said was likely caused by a natural phenomena such as a dust devil or waterspout). Referred in the press as “flying saucer nests,” this story is more a UFO report than a crop circle report.

As in the 1678 mowing devil legend, the case for it being linked to crop circles is especially weak when we consider that the impression or formation was not made in a crop of any kind but instead in ordinary grass. A round impression in a lawn or grassy area is not necessarily mysterious (as anyone with a kiddie pool in the back yard knows). Indeed, mysterious circles have appeared in grass throughout the world that are sometimes attributed to fairies but instead caused by disease.

In fact, the first real crop circles didn’t appear until the 1970s, when simple circles began appearing in the English countryside. The number and complexity of the circles increased dramatically, reaching a peak in the 1980s and 1990s when increasingly elaborate circles were produced, including those illustrating complex mathematical equations.

In July 1996, one of the world’s most complex and spectacular crop circles appeared in England, across a highway from the mysterious and world-famous Stonehenge monument in the Wiltshire countryside. It was astonishing fractal pattern called a Julia Set, and while some simple or rough circles might be explained away as the result of a strange weather phenomenon, this one unmistakably demonstrated intelligence. The only question was whether that intelligence was terrestrial or extra-terrestrial.

Making the design all the more mysterious, it was claimed that the circle appeared in less than an hour and during the daytime — which, if true, would be virtually impossible for hoaxers to accomplish. The circle became one of the most famous and important crop circles in history.

It was later revealed that the circle had in fact been made in about three hours (by three hoaxers) very early that morning. It simply hadn’t been noticed until the following afternoon when spotted from an airplane overhead. 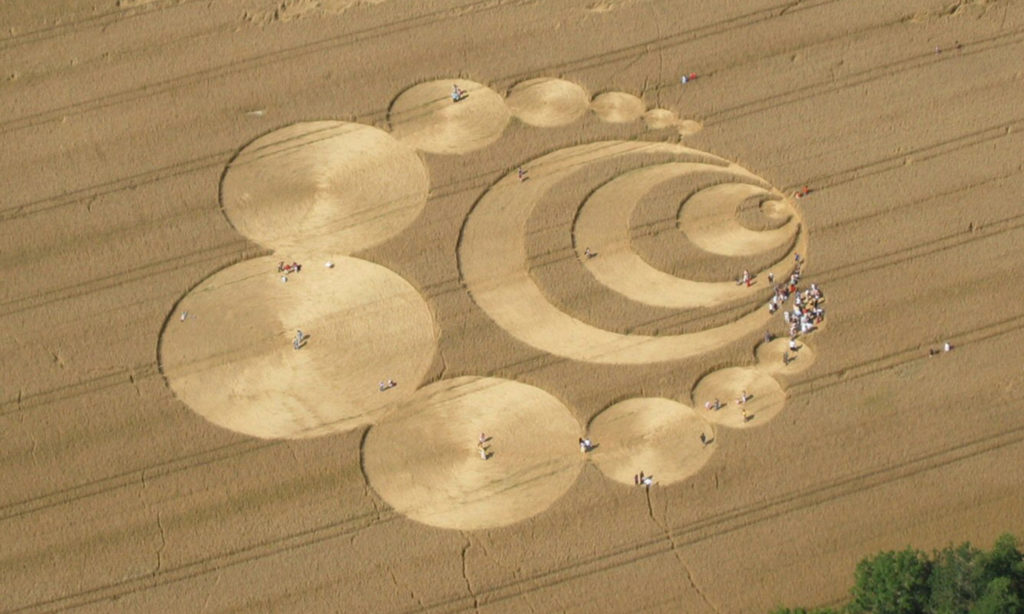 Unlike other mysterious phenomenon such as psychic powers, ghosts, or Bigfoot, there is no doubt that crop circles are “real.” The evidence that they exist is clear and overwhelming. The real question is instead what creates them — and there are ways to investigate that question.

We can look at both internal and external evidence to evaluate crop circles. Internal information includes the content and meaning of the designs (is there anything that indicates that any information contained in the “messages” is of extraterrestrial origin?), and external information, including the physical construction of the crop designs themselves (is there anything that indicates that the designs were created by anything other than humans?)

Others, such as molecular biologist Horace Drew, suggest that the answer lies instead in time travel or alien life. He theorizes that the patterns could be made by human time travelers from the distant future to help them navigate our planet. Drew, working on the assumption that the designs are intended as messages, believes he has decoded crop circle symbols and that they contain messages such as “Believe,” “There is good out there,” “Beware the bearers of false gifts and their broken promises,” and “We oppose deception” (all, presumably, in English).

However, these odd, pseudo-biblical messages undermine the credibility of the crop circles, or at least the meaning read into them. Of all the information that an extraterrestrial intelligence might choose to convey to humanity — ranging from how to contact them to engineering secrets of faster-than-light travel — these aliens chose to impart intentionally cryptic messages about false gifts, broken promises, and hope for mankind (along with what seems to be a reference to a popular “The X-Files” slogan).

Many who favor an extraterrestrial explanation claim that aliens physically make the patterns themselves from spaceships; others suggest that they do it using invisible energy beams from space, saving them the trip down here. Still others believe that it is human, not extraterrestrial, thought and intelligence that is behind the patterns — not in the form of hoaxers but some sort of global psychic power that manifests itself in wheat and other crops.

While there are countless theories, the only known, proven cause of crop circles is humans. Their origin remained a mystery until September 1991, when two men confessed that they had created the patterns for decades as a prank to make people think UFOs had landed (they had been inspired by the 1966 Tully UFO report). They never claimed to have made all the circles — many were copycat pranks done by others — but their hoax launched the crop circle phenomena.

Most crop circle researchers admit that the vast majority of crop circles are created by hoaxers. But, they claim, there’s a remaining tiny percentage that they can’t explain. The real problem is that (despite unproven claims by a few researchers that stalks found inside “real” crop circles show unusual characteristics), there is no reliable scientific way to distinguish “real” crop circles from man-made ones.

While there are always a few exceptions, virtually all crop circles share a set of common characteristics.

Circles. Crop circles, as the name implies, almost always involve circles — rarely triangles, rectangles, or squares, though some designs contain straight or curved lines. Perhaps not coincidentally, a circle is the easiest pattern for hoaxers to create. 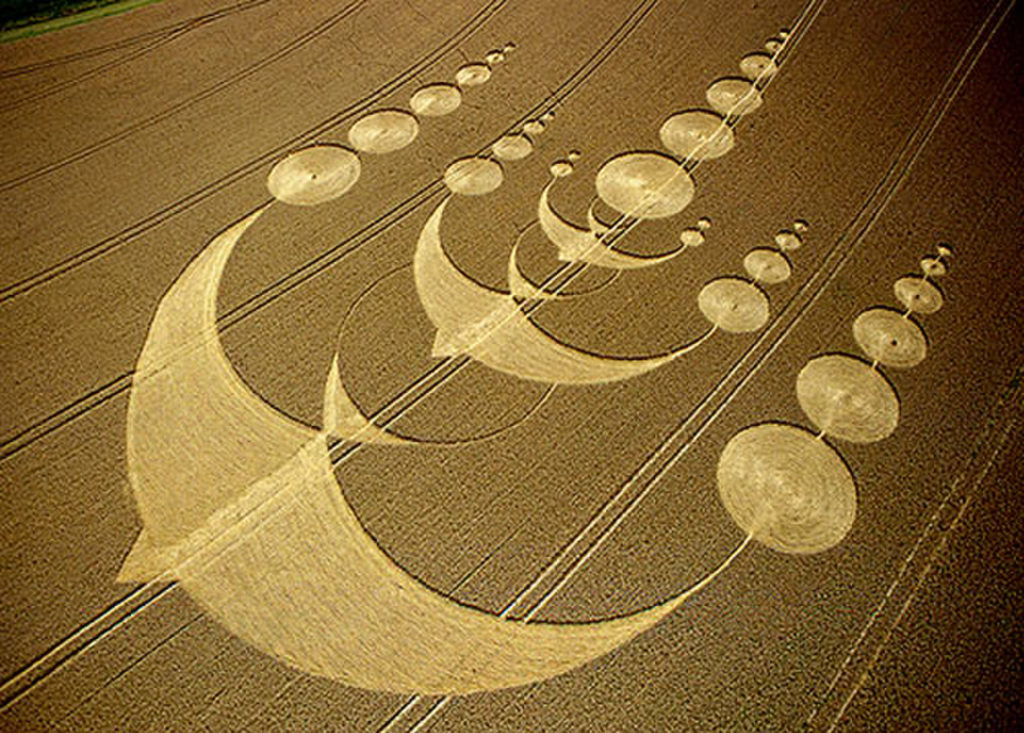 This design of three flying birds was created on Aug. 3, 2003, in the county of Wiltshire in southern England. The birds, which resemble swallows, have ever-diminishing circles trailing behind their wing tips. Credit: public domain

Nocturnal creation. Crop circles are formed overnight, often sighted by farmers or passersby the next morning. Though there seems no logical reason for extraterrestrials or earth energies to only create patterns at night, it is obviously a great advantage for hoaxers to create the designs under the cover of darkness; full moon nights are especially popular.

Camera shyness. Crop circles have never been recorded being made (except, of course, for those created by hoaxers). This is a very suspicious trait; after all, if mysterious earthly forces or aliens are at work, there’s no reason to think that they wouldn’t happen when cameras are recording.

Access to roads. Crop circles usually appear in fields that provide reasonably easy public access, close to roads and highways. They rarely appear in remote, inaccessible areas. Because of this, the patterns are usually noticed within a day or two of their creation by passing motorists.

There are many theories about what creates crop circles, including aliens, mysterious vortices, time travelers and wind patterns, but they all lack one important element: good evidence. The only known cause of crop circles is humans. Perhaps one day a mysterious, unknown source will be discovered for crop circles, but until the perhaps they are best thought of as collective public art.

Latest on the Crop Circle Mystery: A Closer Look 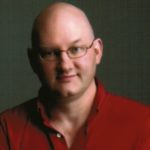 Benjamin Radford is the Bad Science columnist for Live Science. He covers pseudoscience, psychology, urban legends and the science behind “unexplained” or mysterious phenomenon. Ben has a master’s degree in education and a bachelor’s degree in psychology. He is deputy editor of Skeptical Inquirer science magazine and has written, edited or contributed to more than 20 books, including Scientific Paranormal Investigation: How to Solve Unexplained Mysteries, Tracking the Chupacabra: The Vampire Beast in Fact, Fiction, and Folklore and Investigating Ghosts: The Scientific Search for Spirits, out in fall 2017. His website is www.BenjaminRadford.com.