The Real Threat to America Comes from Americans

Just as the Arab world struggles to come to grips with jihadism, the United States has failed to grapple with its own demons. 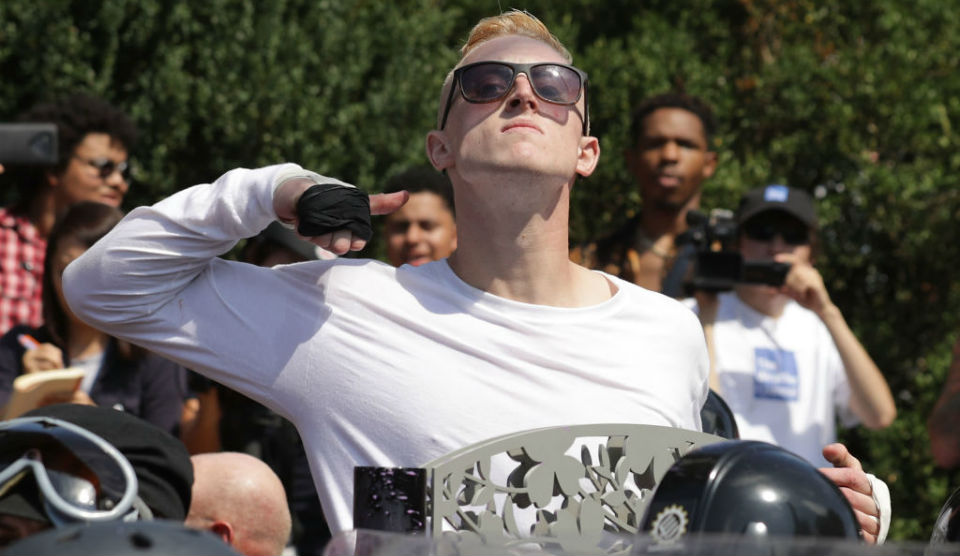 21 Aug 2017 – This month, a man was arrested in Oklahoma City for trying to detonate 1,000 pounds of explosives in a cargo van parked downtown. The attack, he hoped, would cripple the government and start a revolution. Last October, three men were arrested in Kansas for plotting to bomb an apartment complex and a mosque using four cars laden with explosives.

In these febrile days, where terrorists have sought to wreak fear and chaos from Orlando to Paris, and now Barcelona, you’d expect wall-to-wall coverage on cable news about these foiled plots. Terrorism experts would be wheeled out to opine for hours on all angles, from the explosives used to the profile of the would-be attackers to how and why they were radicalized.

Instead, the two incidents got barely any coverage — some brief news spots here and there and a few mentions online. Ask any Arab-American or Muslim in America why those incidents weren’t covered ad nauseam and they’ll reply deadpan: because the would-be attackers were white.

So why has this growing threat not received the same coverage as attacks carried out by Islamist jihadis or Muslim lone wolves? The answer goes to the heart of what every society struggles with: admitting that it can produce darkness.

The alternative explanation — that the plots were ignored because they failed — doesn’t hold water. Just think of the alarmist coverage every time a plot hatched in Yemen targeting the United States is foiled. Nor were these isolated incidents. The FBI just warned that white supremacist groups have already carried out more attacks in the years since 9/11 than any other domestic extremist group and were likely to carry out more.

These attacks happen regularly — and receive barely any media attention. When a mosque in Bloomington, Minnesota, was torn apart by a homemade bomb on Aug. 5, the response was muted. When an Indian man was shot dead in February in a bar in Olathe, Kansas, by a white man who shouted, “Get out of my country,” I struggled to find any coverage on American cable television. The BBC was one of the few media outlets to cover the story in any depth.

People prefer to think evil comes from the outside, not from within.

People prefer to think evil comes from the outside, not from within. White nationalists and supremacists get treated as a curiosity and described as “dapper” even in progressive magazines like Mother Jones (the magazine was mocked and promptly changed the headline). It’s much easier to believe that the real threat emanates from people from “over there,” who wish Americans harm and threaten their way of life, than to ask hard questions about one’s own society and its unresolved issues.

Until last week, there was no liberal-conservative divide here. From Fox News to MSNBC, the approach was the same. This double standard in media coverage and political discourse, which also feeds Islamophobia, has now received more attention in the wake of the events in Charlottesville, Virginia, but it took a horrific car attack that killed a woman and white men brandishing torches chanting “Jews will not replace us” for the threat of domestic terrorism to rise to national attention.

The repeated invocations of those appalled by the Charlottesville violence has been: “We are better than this” or “this is not who we are.” It reminds me of friends in the Arab world shaking their heads at the violence meted out by the so-called Islamic State or the many awful suicide attacks of jihadi Islamists across the region. In the Middle East, too, the response of many to these crimes is to create distance from the perpetrators, often by blaming outsiders. The Islamic State is the creation of America, these people might say, or 9/11 was a Mossad plot to make Arabs look bad.

Yet the hard truth is that those who perpetrate terrorism are a product of their societies, even if they’re a minority. They’re the result of unresolved issues, deep-seated problems that have been glossed over.

Societies in the Arab world have long struggled with this conversation. Only when militants conducted suicide attacks inside Saudi Arabia in 2003 did the kingdom acknowledge that its austere interpretation of Islam had opened the way for some on the fringes to take it to violent extremes. The rise of the Islamic State again brought to the fore the debate about intolerant religious teachings used by radical clerics to whip disenfranchised youth into a frenzy. But only now is the sectarian hate speech favored by some clerics finally being called out forcefully and very publicly in the kingdom.

In the United States, Republicans harangued Democrats during the 2016 presidential campaign for allegedly refusing to use the words “radical Islamic terrorism” to describe the crimes of the Islamic State and other jihadis. Donald Trump apparently needed convincing to condemn Nazis and the Ku Klux Klan after Charlottesville but wasted no time in tweeting about the threat of Islamic terrorism after the Barcelona attack. Understandably, Democrats and many others are wary of using broad terms that could alienate 1.8 billion Muslims, who find their own world wrecked by a minority of radical violent extremists.

But it is also essential to call things by their name. Experts from the region I spoke to disagreed with the term “radical Islamic terrorism,” which is too broad, but suggested the more specific term “jihadi Islamists.” Hassan Hassan, the co-author of a book about the Islamic State, and Nadia Oweidat, a lecturer on Islamic thought, advised that the best strategy was to address the fact that the Islamic State has drawn inspiration from teachings that are common in the region head-on. Failing to do so, they said, will make it impossible to show how they have subverted those teachings.

In the United States, the focus can’t just be on Trump and statues of Confederate leaders but on the reason why the discourse of white supremacy resonates with some and leads them to violence. It’s important to realize that these outbreaks of violence are the product of deeply rooted injustices in U.S. society — a double standard baked into American life in which Tamir Rice, a 12-year-old black boy, is shot dead by police for wielding a toy gun while white militiamen armed to the teeth can march unimpeded in Charlottesville. Virginia Gov. Terry McAuliffe pushed back against criticism that the police didn’t do enough to stop the bloodshed: “It’s easy to criticize.… You saw the militia walking down the street. You would have thought they were an army.”

After Trump’s election, my friend Rabih Alameddine, who fled Lebanon in the 1980s and settled in the United States, wrote an essay titled “Our Part in the Darkness” in reaction to those around him who insisted that “we are better than this.”

“We are not better than this. We are this,” he argued.

“We are not better than this. We are this,” he argued. “The man was elected president. Ipso facto, America is this, we are this.”

Not everyone is this. Not all of America can be reduced to the angry crowd of white men marching in Charlottesville. But from slavery to Japanese internment camps to the voter suppression laws recently popping up all over the country, the United States has had its share of darkness and has not done enough to rid itself of comforting myths that undergird its sense of exceptionalism. America as a shining city on a hill that strives toward progress still appeals and inspires people across the globe; these same people are watching with some trepidation to see how the United States works through this critical moment. Yes, many have loudly denounced racism, hatred, and bigotry, but 67 percent of Republicans also approve of how Trump responded to the events in Charlottesville.

There is perhaps some degree of schadenfreude among Arabs in response to these events. There is a small sense of vindication in realizing that America, which has for so long lectured others about civil rights, democracy, and freedom, has some serious problems of its own that it needs to address.

When the white supremacist Richard Spencer held a press conference just down the road from the White House in November mere days after Trump’s victory, during which his followers raised their hands in a Nazi salute, one Saudi tweeted: “America, we need to talk about your radicalization problem.”

That conversation about why so many young white men feel angry and disenfranchised has certainly now exploded into public view. At CNN, Jim Sciutto wrote that jihadis and white nationalists are both driven by a “search for identity, sick devotion to a cause, and angry reaction to perceived victimization.” And yet the Trump administration has chosen to focus its efforts to counter violent extremism solely on jihadis and ended funding for organizations like Life After Hate, a group that works to deradicalize neo-Nazis.

The singular focus on acts of terrorism by jihadis not only feeds Islamophobia but allows people to ignore the threat of domestic terrorism by white supremacists. But hate is hate, wherever it arises.

“Racism, xenophobia, anti-Semitism & Islamophobia are poisoning our societies,” tweeted U.N. Secretary-General António Guterres. “We must stand up against them. Every time. Everywhere.”

It’s time to realize that no society is without darkness — and the direst threat facing the United States today may well be from within, not without.

Kim Ghattas is a BBC correspondent covering international affairs and a public policy fellow at the Woodrow Wilson Center. She is the author of The Secretary: A Journey with Hillary Clinton from Beirut to the Heart of American Power.