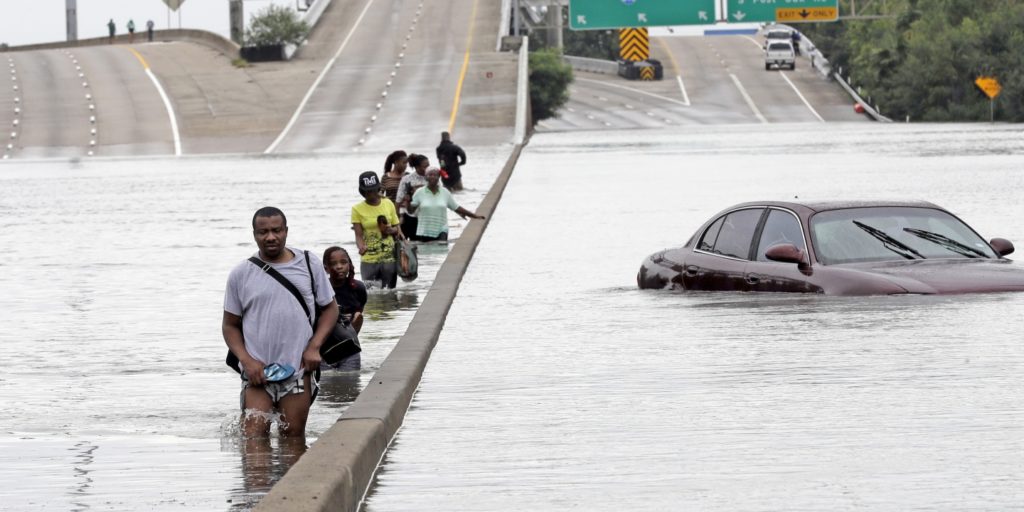 Aug 28 2017 – Now is exactly the time to talk about climate change, and all the other systemic injustices — from racial profiling to economic austerity — that turn disasters like Harvey into human catastrophes.

Turn on the coverage of the Hurricane Harvey and the Houston flooding and you’ll hear lots of talk about how unprecedented this kind of rainfall is. How no one saw it coming, so no one could adequately prepare.

What you will hear very little about is why these kind of unprecedented, record-breaking weather events are happening with such regularity that “record-breaking” has become a meteorological cliché. In other words, you won’t hear much, if any, talk about climate change.

This, we are told, is out of a desire not to “politicize” a still unfolding human tragedy, which is an understandable impulse. But here’s the thing: every time we act as if an unprecedented weather event is hitting us out of the blue, as some sort of Act of God that no one foresaw, reporters are making a highly political decision. It’s a decision to spare feelings and avoid controversy at the expense of telling the truth, however difficult. Because the truth is that these events have long been predicted by climate scientists. Warmer oceans throw up more powerful storms. Higher sea levels mean those storms surge into places they never reached before. Hotter weather leads to extremes of precipitation: long dry periods interrupted by massive snow or rain dumps, rather than the steadier predictable patterns most of us grew up with.

The records being broken year after year — whether for drought, storm surges, wildfires, or just heat — are happening because the planet is markedly warmer than it has been since record-keeping began. Covering events like Harvey while ignoring those facts, failing to provide a platform to climate scientists who can make them plain, all while never mentioning President Donald Trump’s decision to withdraw from the Paris climate accords, fails in the most basic duty of journalism: to provide important facts and relevant context. It leaves the public with the false impression that these are disasters without root causes, which also means that nothing could have been done to prevent them (and that nothing can be done now to prevent them from getting much worse in the future).

It’s also worth noting that the Harvey coverage has been highly political since well before the storm made landfall. There has been endless talk about whether Trump was taking the storm seriously enough, endless speculation about whether this hurricane will be his “Katrina moment” and a great deal of (fair) point-scoring about how many Republicans voted against Sandy relief but have their hands out for Texas now. That’s politics being made out of a disaster — it’s just the kind of partisan politics that is fully inside the comfort zone of conventional media, politics that conveniently skirts the reality that placing the interests of fossil fuel companies ahead of the need for decisive pollution control has been a deeply bipartisan affair.

In an ideal world, we’d all be able to put politics on hold until the immediate emergency has passed. Then, when everyone was safe, we’d have a long, thoughtful, informed public debate about the policy implications of the crisis we had all just witnessed. What should it mean for the kind of infrastructure we build? What should it mean for the kind of energy we rely upon? (A question with jarring implications for the dominant industry in the region being hit hardest: oil and gas). And what does the hyper-vulnerability to the storm of the sick, poor, and elderly tell us about the kind of safety nets we need to weave, given the rocky future we have already locked in? 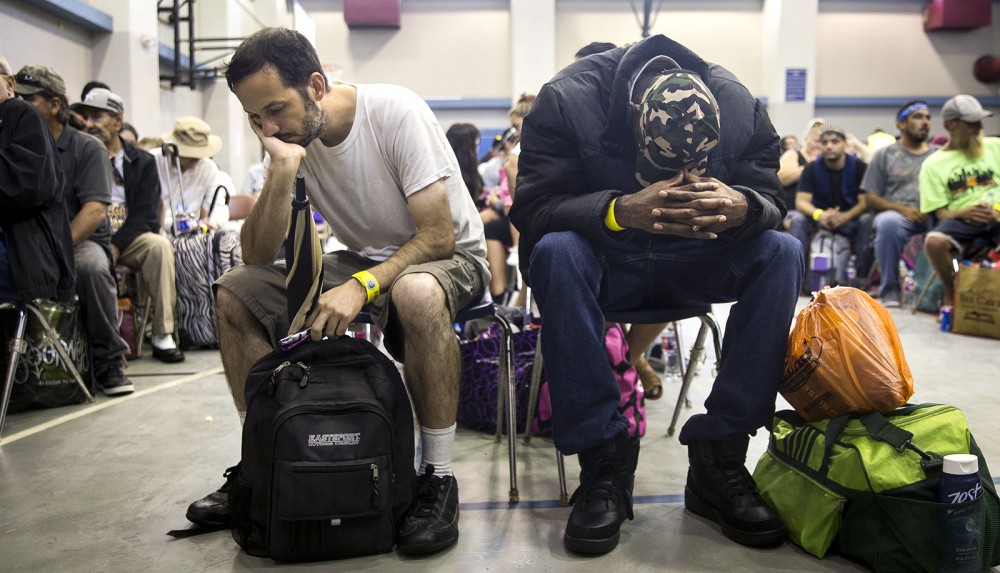 People rest while waiting to board a bus headed for San Antonio at an evacuation center in Corpus Christi, Texas, on Friday, Aug. 25, 2017. Photo: Nick Wagner/Austin American Statesman/AP

With thousands displaced from their homes, we might even discuss the undeniable links between climate disruption and migration — from the Sahel to Mexico — and use the opportunity to debate the need for an immigration policy that starts from the premise that the U.S. shares a great deal of responsibility for the key forces driving millions from their homes.

But we don’t live in a world that allows for that kind of serious, measured debate. We live in a world in which the governing powers have shown themselves all too willing to exploit the diversion of a large-scale crisis, and the very fact that so many are focused on life-and-death emergencies, to ram through their most regressive policies, policies that push us further along a road that is rightly understood as a form of “climate apartheid.” We saw it after Hurricane Katrina, when Republicans wasted no time pushing for a fully privatized school system, weakening labor and tax law, increasing oil and gas drilling and refining, and flinging the door open to mercenary companies like Blackwater. Mike Pence was a key architect of that highly cynical project — and we should expect nothing less in Harvey’s wake, now that he and Trump are at the wheel.

We are already seeing Trump using the cover of Hurricane Harvey to push through the hugely controversial pardoning of Joe Arpaio, as well as the further militarization of U.S. police forces. These are particularly ominous moves in the context of news that immigration checkpoints are continuing to operate wherever highways are not flooded (a serious disincentive for migrants to evacuate), as well as in the context of municipal officials tough-talking about maximum penalties for any “looters” (it’s well worth remembering that after Katrina, several African-American residents of New Orleans were shot by police amid this kind of rhetoric.)

In short, the right will waste no time exploiting Harvey, and any other disaster like it, to peddle ruinous false solutions, such as militarized police, more oil and gas infrastructure, and privatized services. Which means there is a moral imperative for informed, caring people to name the real root causes behind this crisis — connecting the dots between climate pollution, systemic racism, underfunding of social services, and overfunding of police. We also need to seize the moment to lay out intersectional solutions, ones that dramatically lower emissions while battling all forms of inequality and injustice (something we have tried to lay out at The Leap and which groups, such as the Climate Justice Alliance, have been advancing for a long time.)

And it has to happen right now – precisely when the enormous human and economic costs of inaction are on full public display. If we fail, if we hesitate out of some misguided idea of what is and is not appropriate during a crisis, it leaves the door wide open for ruthless actors to exploit this disaster for predictable and nefarious ends.

It’s also a hard truth that the window for having these debates is vanishingly small. We won’t be having any kind of public policy debate after this emergency subsides; the media will be back to obsessively covering Trump’s tweets and other palace intrigues. So while it may feel unseemly to be talking about root causes while people are still trapped in their homes, this is realistically the only time there is any sustained media interest whatsoever in talking about climate change. It’s worth recalling that Trump’s decision to withdraw from the Paris climate accord — an event that will reverberate globally for decades to come — received roughly two days of decent coverage. Then it was back to Russia round-the-clock.

A little more than a year ago, Fort McMurray, the town at the heart of the Alberta boom in tar sands oil, nearly burned to the ground. For a time, the world was transfixed by the images of vehicles lined up on a single highway, with flames closing in on either side. At the time, we were told that it was insensitive and victim-blaming to talk about how climate change was exacerbating wildfires like this one. Most taboo was making any connection between our warming world and the industry that powers Fort McMurray and employed the majority of the evacuees, which is a particularly high-carbon form of oil. The time wasn’t right; it was a moment for sympathy, aid, and no hard questions.

But of course by the time it was deemed appropriate to raise those issues, the media spotlight had long since moved on. And today, as Alberta pushes for at least three new oil pipelines to accommodate its plans to greatly increase tar sands production, that horrific fire and the lessons it could have carried almost never come up.

There is a lesson in that for Houston. The window for providing meaningful context and drawing important conclusions is short. We can’t afford to blow it.

Talking honestly about what is fueling this era of serial disasters — even while they’re playing out in real time — isn’t disrespectful to the people on the front lines. In fact, it is the only way to truly honor their losses, and our last hope for preventing a future littered with countless more victims. 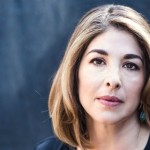