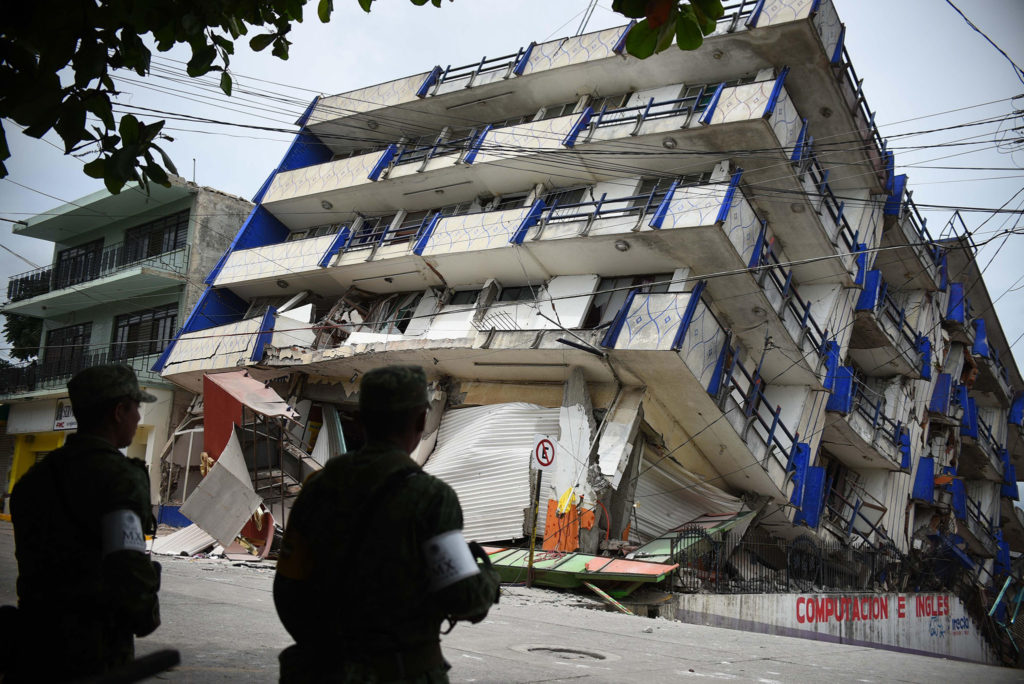 15 Sep 2017 – Mexico has a long seismic history, so any given earthquake here does not necessarily come as a surprise. In the pre-Hispanic epoch, inhabitants of the country’s central zone reported on earthquakes in their “códices,” or indigenous records, attributing the shaking to the wrath of their gods.

But the quake that convulsed the southeastern states of Oaxaca and Chiapas on Sept. 7, 2017, was a shock nonetheless.

First, there was its magnitude: at 8.2, it ties as Mexico’s strongest earthquake since the invention of modern seismic-measurement tools, surpassing even the great Mexico City quake of Sept. 19, 1985, which registered 8.1. This recent quake killed nearly 100 people, most of them in Oaxaca, and the death toll is rising as locals continue to dig out from the rubble.

Beyond the devastation, it was the earthquake’s location that took scientists by surprise. Until last week, seismologists believed that its epicentral area – near the old Zapotec city of Juchitán, Oaxaca, in Mexico’s poor southeastern region – was an “aseismic gap.” In other words, we thought this zone, the Tehuantepec gap, was unlikely to cause an earthquake. 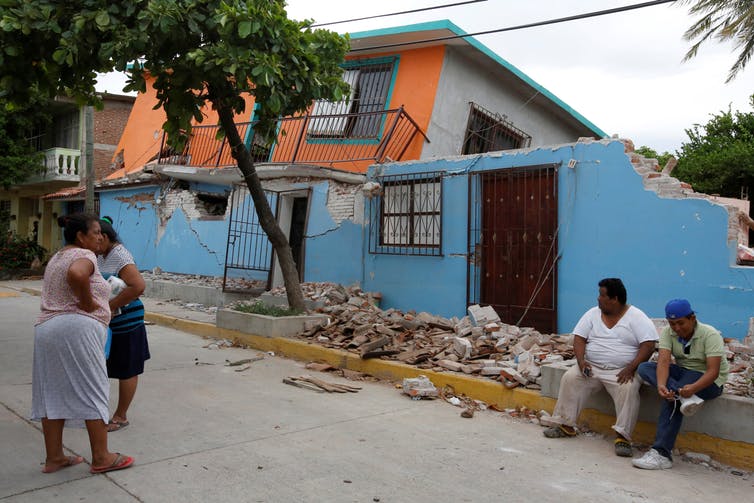 The Tehuantepec region is actually one of the few parts of Mexico’s Pacific coast that had never suffered a major earthquake.

Thus, most of the geophysical studies done in the area have focused on the nearby Guerrero gap area, largely overlooking the seemingly inactive coastal zone off the Isthmus of Tehuantepec. 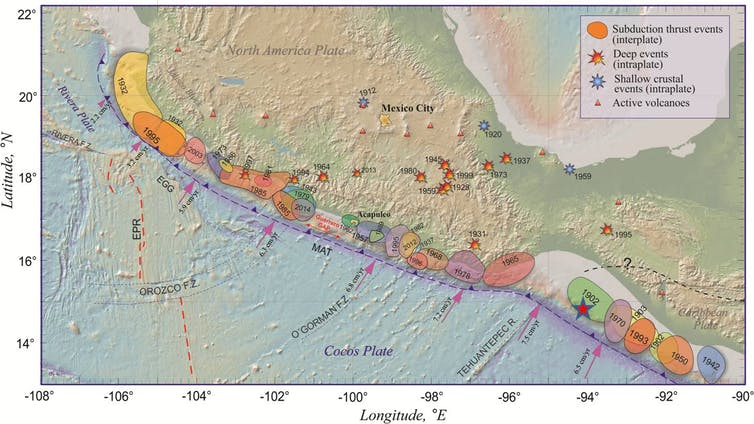 Major earthquakes along the Mexican Pacific coast, 1900-2017. The red star marks the epicenter of the Sept. 7, 2017, Tehuantepec quake. Adapted from Kostoglodov and Pacheco (1999), Author provided

The tectonics of this oceanic area are not simple. A submarine mountain chain, the Tehuantepec Ridge, interacts with the North American continental plate, moving underneath it at a speed of roughly three inches per year. Scientists know remarkably little about how this subduction, as it’s called, affects seismicity – not here, and not in other regions with similarly complex topography.

In this part of the Mexican Pacific coast there is also what’s called a “triple-junction zone,” meaning that the boundaries of three tectonic plates intersect here – in this case, the Cocos, North America and Caribbean plates. Each of them moves at a different speed and in its own direction, which makes predicting seismic activity in such areas extraordinarily difficult.

Here’s what we do know. The Tehuantepec earthquake happened just offshore, within the Cocos plate, at a depth of approximately 37 miles.

The plate tectonics here get complicated, but essentially the oceanic Cocos plate slides underneath the North American continental plate, dipping some 50 degrees. The rupture that caused the quake started there, inside the subducted Cocos plate, along a highly unstable, almost vertical fault.

The stresses released during this rupture were transferred mostly upwards and northwest, in the Earth’s upper crust. The magnitude of the main event was so great that it reactivated numerous shallow faults, triggering a seemingly endless series aftershocks: the release of energy accumulated over decades.

For hours after the initial quake, residents of Chiapas and Oaxaca felt aftershocks, some of them with magnitudes greater than 5.5 – significant earthquakes on their own merits.

These are the facts as we know them now, but many important scientific questions remain unanswered. For example, most of the aftershocks occurred in a narrow southeast-to-northwest band. Does this mean that the energy from the rupture was shunted more strongly in one direction – what’s called directivity effect? 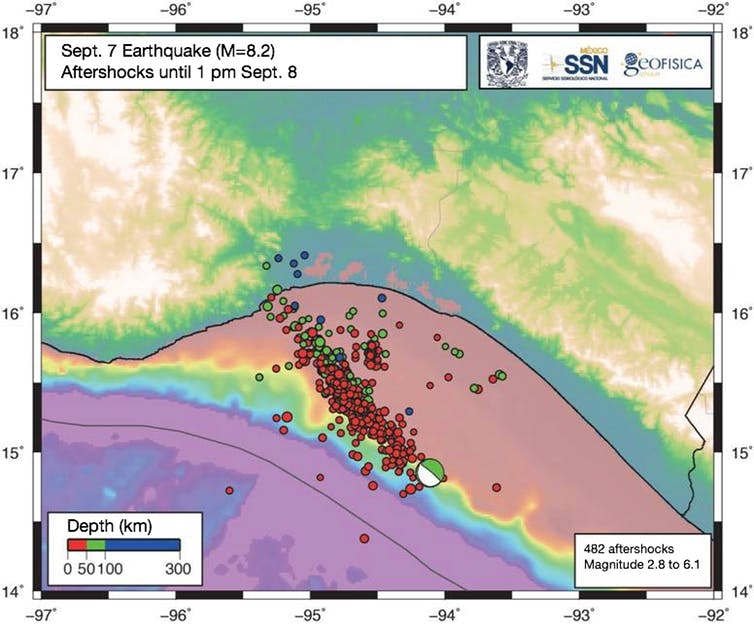 Aftershocks from the Tehuantepec quake. Blue dots show the deepest shocks, followed by green and red (shallowest). The large dot is the main shock.
Image adapted from the Special Report of Servicio Sismológico Nacional, UNAM.

Seismologists around the world are also curious about the characteristics of the hardest-hit areas. Is there something in the earth below the city of Juchitán, which was almost completely destroyed in the quake, that caused the ground motion there to be especially intense?

This is called a site effect, and it is important to understand because it helps governments craft building codes based on expected quake impact.

Finally, has this earthquake now “filled” the Tehuantepec gap? In other words, did the massive September 7 quake release all the seismic stresses accumulated in that region, or do some areas of the plate remain unbroken? Since we don’t know, the future risk of quakes at the Tehuantepec gap remains unclear.

Lessons from the 1985 Mexico City earthquake, which killed thousands in Mexico’s capital, pushed the country to tighten building codes in large cities and, importantly, led to the creation of a Mexican Seismic Alert System and a National Civil Protection System.

More detailed studies of the geophysical records obtained from the Sept. 7 Tehuantepec quake will help shed light on unanswered questions as Mexico moves forward, learning from this tragedy as Oaxaca and Chiapas rebuild.