A Reactionary Wave Points to a Dark Future for Brazil 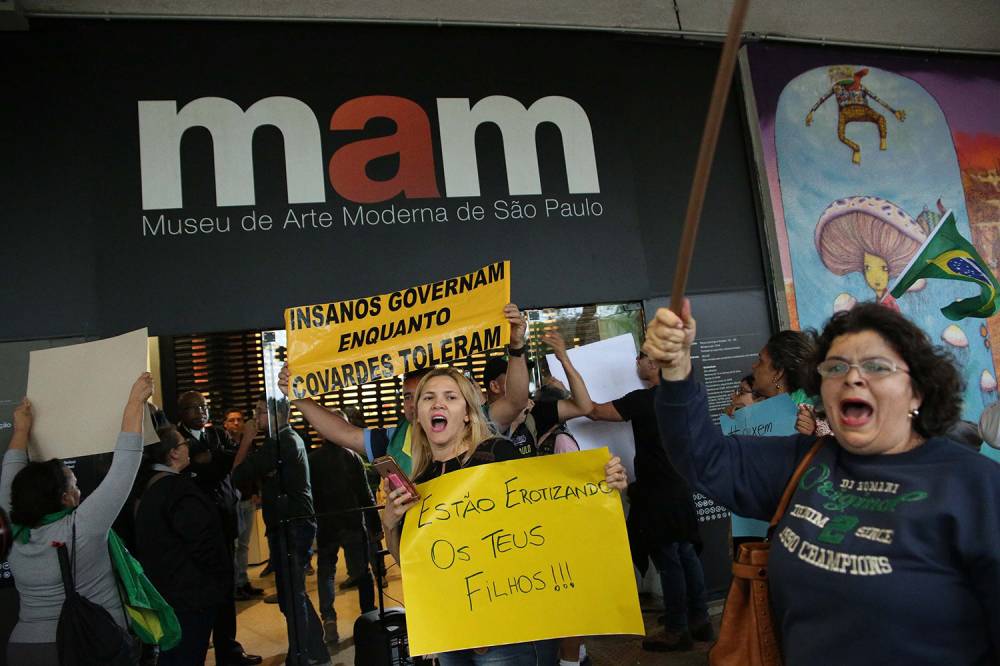 5 Oct 2017 – In March 2013, Dilma Rousseff, then-president of Brazil, boasted 65 percent approval ratings, higher than her predecessors Luiz Inácio Lula da Silva and Fernando Henrique Cardoso during the same periods in their governments. According to the pollster Datafolha, Brazilians were optimistic about the economy and the purchasing power of their salaries. Just three months later, after the nationwide street protests popularly dubbed the “June Journeys,” Rousseff’s popularity plummeted some 27 points. It was the largest fall in approval between two polls since former President Fernando Collor confiscated Brazilians’ savings accounts in the hyperinflation era of 1990.

But whoever thought the June demonstrations would positively shake up the next election season would be fooled. The following year, Brazil voted in its most conservative Congress since 1964. By 2016, this Congress had ousted the legitimately re-elected president through a parliamentary coup. The Brazilian Democratic Movement Party — Rousseff’s erstwhile ally — pulled an ideological U-turn, joined forces with the opposition Brazilian Social Democracy Party, and formed a government more conservative than any we have seen in recent times. 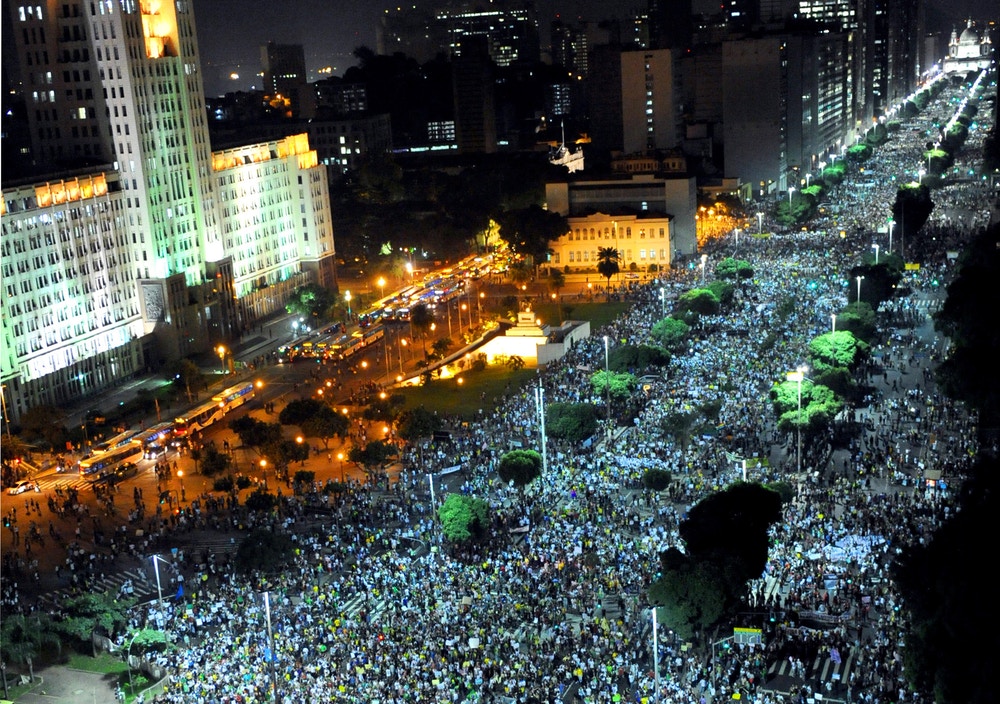 In 2017, we face a somber scene: a presidential candidate who is an enthusiastic supporter of the torture carried out during the 1964-1985 military dictatorship is polling at 21 percent a year ahead of elections; the Supreme Court has decided that teachers can promote specific religious beliefs in the classroom; the so-called Non-Partisan School legislation, allegedly meant to combat supposed “leftist indoctrination” by teachers, has passed in several cities; a congressman is attempting to amend the constitution to re-criminalize all abortion; art exhibitions in museums have become the target of moralistic outrage and boycott; and a top general feels comfortable enough to publicly float the idea of a new military coup. These episodes suggest that conservatism is in vogue in Brazil, and they are not isolated occurrences. The reactionary wave has become a tsunami, and it appears to have not yet reached its crest.

With a crucifix hung on its wall, the Supreme Court — the top juridical institution in a secular state — voted 6 to 5 that public school educators can teach their own religions in the classroom. The decision arose from a lawsuit filed by the attorney general that sought to define religious instruction as that which concerns “the doctrines, practices, history, and social dimensions of different religions.” Could anything be more coherent and obvious in a country whose constitution defines it as a secular nation?

Let’s not fool ourselves: Only Christian faiths will be taught in classrooms.

The law already mandated that religion be provided in public schools, but it did not specify if a particular faith could be advocated. In light of this vagueness, the government attorney sought to prohibit religious education that indoctrinated students in one specific faith, charging that it violated the principle of a secular state. The majority of justices disagreed, saying that religion classes are voluntary. The fact that they are optional does not change that taxpayers of various faiths, including atheists, are going to pay to promote religions to which they do not adhere. 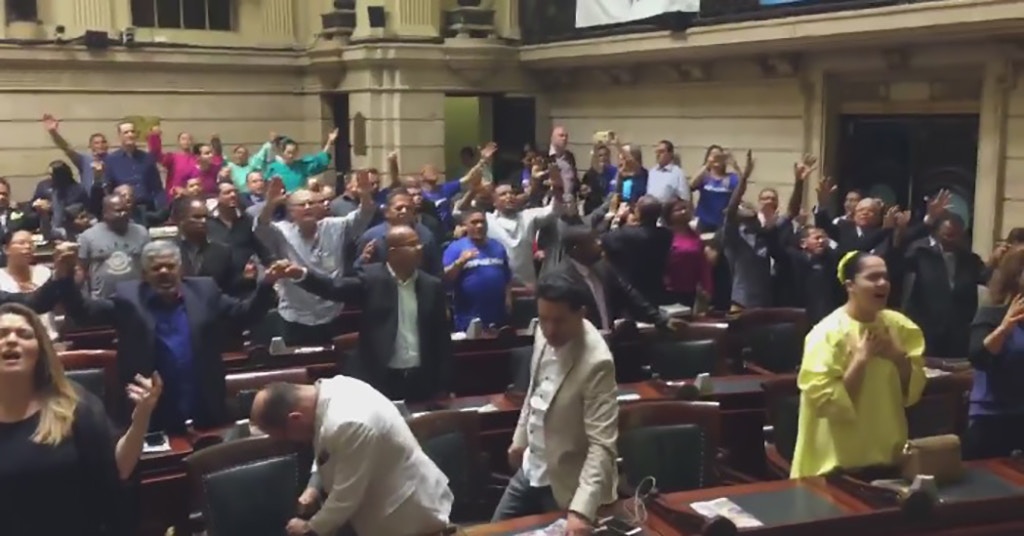 An evangelical prayer service was held in the chambers of the Rio de Janeiro City Council on Sept. 29, led by a bishop of the Universal Church of the Kingdom of God, who is also an elected city council member. Photo: Facebook

This is clearly a violation of the secular nature of our state. This means that priests and pastors, even those who literally demonize Afro-Brazilian faiths, are now allowed by the Supreme Court to catechize in public schools. Let’s not fool ourselves: Only Christian faiths will be taught in classrooms.

While the Supreme Court made it possible for an issue that should pertain to the private sphere to be taught in public schools, the Non-Partisan School project bans teachers from exposing their political views to students. Parties on the right, the evangelical caucus, and the libertarian “Free Brazil Movement” are leading this effort and they’re having success. In one of their anti-communist deliriums, they intend to combat a supposed “Marxist ideological indoctrination” happening at schools. Some 62 pieces of legislation have been proposed at the municipal level across the country. At least four cities have approved such laws. No matter that the federal public ministry, a body of independent public prosecutors, has called such legislation unconstitutional several times, nor that Supreme Court justice Luís Roberto Barroso suspended one of these laws enacted in the state of Alagoas precisely on the grounds that it violated the constitution. But who gives a damn about the constitution these days?

As far as I understand:
A social sciences teacher CAN’T have ideology.
A religion teacher CAN indoctrinate students with his own religion.
Oh, OK!

A priest can comfortably teach that humanity came from Adam and Eve, while a history teacher will have to watch their words when talking about the Russian or Cuban revolutions. How will a teacher describe the 1964 military intervention in Brazil? As a coup or a revolution? Was Rousseff ousted through a legitimate impeachment or a parliamentary coup? Who will decide which terms a teacher can use in the classroom? Who will be the censor to determine if there was or was not any ideological indoctrination? It’s not for nothing this legislation is called the “gag law.” 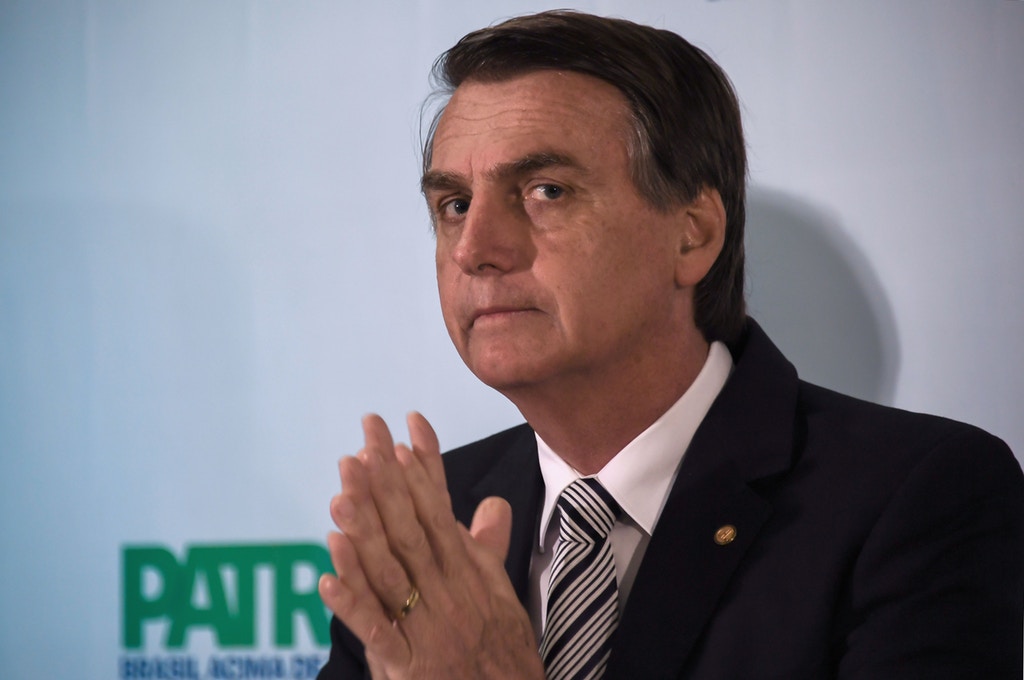 Congressman Jair Bolsonaro is a leading presidential candidate for the 2018 elections. He has garnered headlines and a legion of loyal followers for his reactionary views.
Photo: Apu Gomes/AFP/Getty Images

The reactionaries are stronger than ever. After the general publicly declared himself open to a military coup, a poll from the Instituto Paraná found that 43.1 percent of Brazilians support such a coup. Even though the pollster is not one of the most reliable, the result doesn’t seem too far from our current reality when the most enthusiastic cheerleader of the military dictatorship is consistently polling as a top presidential candidate, or when Datafolha reports the armed forces to be the most trusted institution in Brazil. What is most remarkable about the poll is that young people between 16 and 24 years old are the most favorable to the idea — so much for the supposed “Marxist indoctrination” from teachers. Last December, Paraná carried out the same poll and found 35 percent of Brazilians in favor of a military coup. That is to say: A military coup became eight percentage points more popular in just nine months. If this pace of growth continues, we could come into the next election with the majority of Brazilians supporting a military takeover of Brasília.

So it’s in this fertile environment that 21 percent of Brazilians say they will vote for the dictatorship-endorsing congressman Jair Bolsonaro, a number we can expect to trend upward. In just one month, he gained seven percentage points. In a field with many candidates, it’s an extremely high number, putting him behind only Lula, who likely will not run next year. As Tomás Chiaverini has written in The Intercept Brasil, there is a certain collective denial about the possibility that Bolsonaro could become our next president. They will argue that he doesn’t have the necessary party infrastructure backing him, that he won’t have enough free allotted time for TV ads, that he’s a loudmouth without enough political understanding and intellect to perform well in debates. Well, I actually believe these factors can be quite favorable to him in these times of generalized dissatisfaction and political disillusionment. The campaigns of U.S. President Donald Trump and São Paulo Mayor João Doria — a former host of “The Apprentice Brazil” — went through similar trajectories. The time for us to sound the red alert has passed. This reactionary tsunami is no joke.