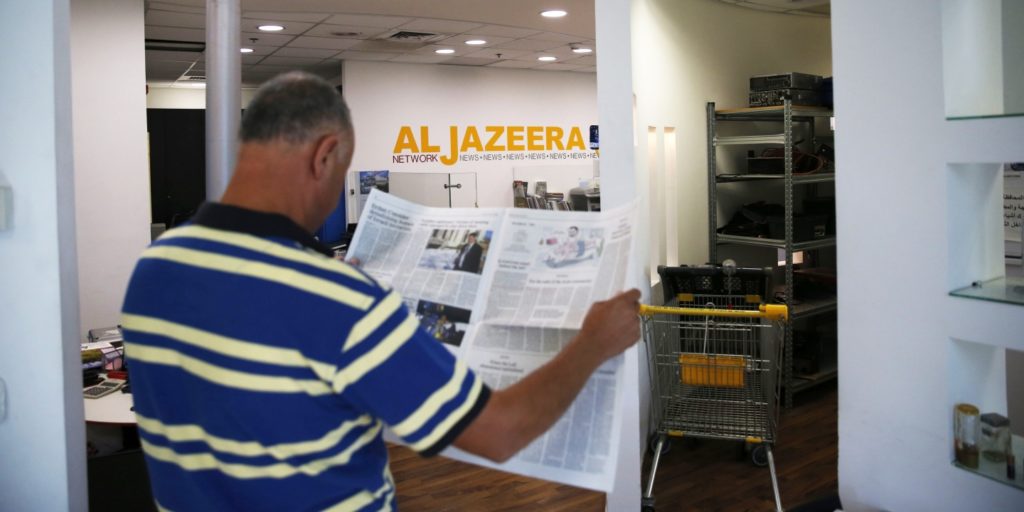 An employee of the Qatar-based news network and TV channel Al Jazeera is seen at the channel’s Jerusalem office on July 31, 2017. Photo: Ahmad Gharabli/AFP/Getty Images

9 Oct 2017 – Britain’s broadcasting regulator today concluded that Al Jazeera did not violate any rules in its controversial undercover investigation exposing the Israeli embassy’s campaign to target British citizens critical of Israel, a campaign that included attempts to destroy the careers of pro-Palestinian British politicians.

The move by the communications regulator, known as Ofcom, clears the way for a follow-up documentary focused on Israeli influence in the U.S., the existence of which has previously been suspected but had yet to be made public. Clayton Swisher, director of investigative journalism for Al Jazeera Media Network, confirmed it to The Intercept on Monday. The goal of the British complaint may partly have been to delay publication of the follow-up American version, he said. “At the very same time [as the London investigation] — and we can safely reveal this now — we had an undercover operative working in tandem in Washington, D.C. With this U.K. verdict and vindication past us, we can soon reveal how the Israel lobby in America works through the eyes of an undercover reporter,” he said.

The four-part series, “The Lobby,” dug into the Israeli embassy in London, as well as several other pro-Israel lobby groups, and their campaign to “take down” British Foreign Office Minister Sir Alan Duncan.

The investigation led to the resignation of a top Israeli official in London, as well as a high-profile complaint that Al Jazeera had broken broadcasting regulations in the United Kingdom. One of the complaints charged the investigation with anti-Semitism, but the government board ruled that imputing such a motive to a film critical of Israel would be akin to calling a series on gang violence racist.

Labour Party leader Jeremy Corbyn wrote to Prime Minister Theresa May in January, calling for a probe into Shai Masot, the Israeli embassy’s then-senior political officer. An undercover reporter secretly filmed Masot discussing a plot to “take down” Duncan, which Corbyn described as “improper interference in this country’s democratic process.” Masot resigned shortly after the recordings were made public.

Swisher, whose writing has also appeared in The Intercept, said that his outlet turned over reams of unpublished audio and video files to demonstrate that its report had not been unfairly edited. “For several months, we were put through the equivalent of an editorial colonoscopy. Turning over emails, different edits, all the raw footage, photos, cellphone messages — basically anything the investigators found of interest,” said Swisher.

Ofcom received complaints about the series from pro-Israel British activists and a former Israel embassy employee. It dismissed all charges, which included anti-Semitism, bias, unfair editing, and the infringement of privacy.

It ruled that as per the International Holocaust Remembrance Alliance’s guidance: “It did not consider that such a critical analysis of the actions of a foreign state constituted anti-Semitism, particularly as the overall focus of the programme was to examine whether the State of Israel was acting in a manner that would be expected of other democratic nations.”

All other charges were also dismissed as Ofcom found the program maintained due impartiality, the footage was not edited in a way which resulted in unfairness, and there was no unwarranted infringement of privacy.

In January, pro-Israel activists in the U.S. began to suspect they’d been infiltrated when footage in America appeared in the British version of “The Lobby.” Tablet began piecing things together and identified the likely hoaxer as a highfalutin British intern who’d dissonantly been renting a fully furnished $5,460 a month corporate apartment.

Swisher wouldn’t confirm or deny the identity of the American operative, but he said that with the American political class focused on foreign intervention in the affairs of the United States, now is an appropriate time to run the follow-up investigation. “I hear the U.S. is having problems with foreign interference these days, so I see no reason why the U.S. establishment won’t take our findings in America as seriously as the British did, unless of course Israel is somehow off limits from that debate,” he said.