Decolonising Research Methodology Must Include Undoing Its Dirty History

Re-search is a dirty word.

Hyphenating “research” into “re-search” is very useful because it reveals what is involved, what it really means, and goes beyond the naive view of “research” as an innocent pursuit of knowledge.

It underscores the fact that “re-searching” involves the activity of undressing other people so as to see them naked. It is also a process of reducing some people to the level of micro-organism: putting them under a magnifying glass to peep into their private lives, secrets, taboos, thinking, and their sacred worlds.

Building on Smith’s work, my concern here is the context in which re-search methodology is designed and deployed. In particular, it concerns the relationship between methodology with power, the imperial/colonial project as well as the implications for those who happened to be the re-searched.

I define re-search methodology as a process of seeking to know the “Other” who becomes the object, rather than subject of re-search and what is means to be known by others.

That is why methodology needs to be decolonised. The process of its decolonisation is an ethical, ontological and political exercise rather than simply one of approach and ways of producing knowledge. 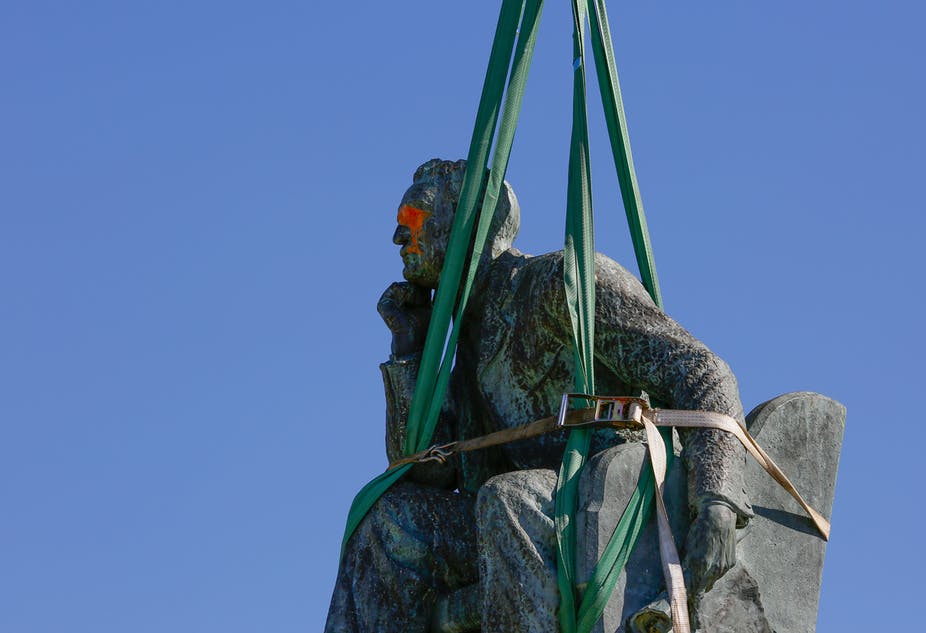 A statue of former Cape Colony governor Cecil Rhodes is removed from the University of Cape Town after student protests. EPA/Nic Bothma

Whose methodology is it anyway?

When Europeans shifted from a God-centred society to secular thinking during the Enlightenment period, they inaugurated the science of “knowability”. God was no longer the only one who could understand the world. The rational human could too.

This idea is best captured in Rene Descartes’ famous dictum

Cogito Ergo Sum (I Think, Therefore, I am).

This marks the emergence of the Cartesian philosophy of being and the Cartesian knowing subject: a human defined by her rationality.

Since then, the decolonial theorists have unmasked the person behind the “I” as not just any human being, but the European “Man”. Here was born the idea that “Man” stands for “Human” as well – the beginning of the shift towards the world being seen through a patriarchal lens.

It was during the “Voyages of discovery” that gave rise to colonialism, that European men began to encounter the “Other” and then assume the position of a “knower” and a “re-searcher” who was thirsty to know the “Other”, who emerged as the native Indian, as Shakespeare’s Caliban, as the African, the Aborigines and the other natives.

The Other had to be re-searched to establish whether they were actually human or not. Here was born the methodology as a handmaiden of colonialism and imperialism.

From ‘ethnographic’ to ‘biometric’ state

In his book Define and Rule, Ugandan scholar Mahmood Mamdani argued that every colonial conqueror was preoccupied with the “native question”. This was about how a minority of white colonial conquerors were to rule over a majority of conquered black people.

To resolve the “native question” the conquered black “native” had to be known in minute detail by the white coloniser. Thus re-search became a critical part of the imperial-colonial project. The European anthropologist became an important re-searcher, producing ethnographic data and knowledge that was desperately needed by colonialism to deal with the nagging “native question”.

As a result of this desire to know the “native” for colonial administrative purposes the colonial state emerged as an “ethnographic state”, interested and involved in ‘re-searching’ the native so as to “define” and “rule” over the “native”.

It was under the “ethnographic state” that colonial ideologues such as Thomas Babington Macaulay in India, Lord Frederick Lugard in West and East Africa, Cecil John Rhodes in Southern Africa used this data to malevolent ends, both to invent the idea of the native and to control her. They assumed the status of experts on the colonised natives and produced treatise such as The Dual Mandate in Africa which assumed the status of modules on how to rule over “natives”.

Today, with the rise of “global terrorism,” drug-trafficking and the problem of migration, new forms of surveillance, and state control have emerged. Keith Breckenridge in his award winning book reflected on concepts of “biometric state” and “documentary state”. These use machines to extract, capture, and store information about all people, but particularly “Muslims” and “blacks”, whose ways of worship, living and actions do not fit into the European template.

What is the role of re-search in this and what methodologies are used in trying to know the “Other”, that is, the unwanted migrant and the feared Muslim.

Decolonising methodology must begin with unmasking the modern world system and the global order as the broader context from which re-search and methodology are cascading and are influenced. It also means acknowledging and recognising its dirtiness.

Our present crisis is that we continued to use re-search methods that are not fundamentally different from before. The critique of methodology is interpreted as being anti-re-search itself. Fearing this label, we (modern scholars and intellectuals) have been responsible for forcing students to adhere religiously to existing ways of knowing and understanding the world.

Consequently, methodology has become the straitjacket that every new researcher has to wear if they are to discover knowledge. This blocks all attempts to know differently. It has become a disciplinary tool that makes it difficult for new knowledge to be discovered and generated.

In the knowledge domain those who try to exercise what the leading Argentinian semiotician and decolonial theorist Whater D. Mignolo termed “epistemic disobedience” are disciplined into an existing methodology, in the process draining it of its profundity.

Decolonising methodology, therefore, entails unmasking its role and purpose in re-search. It also about rebelling against it; shifting the identity of its object so as to re-position those who have been objects of research into questioners, critics, theorists, knowers, and communicators. And, finally, it means recasting research into what Europe has done to humanity and nature rather than following Europe as a teacher to the rest of the world.