How Is It That We Misjudge Our Icons so Badly?

27 Oct 2017 – In February 2013 I got very close to Aung San Suu Kyi. She was speaking to a crowd at a literary festival in Myanmar’s capital, Yangon, and I hopped onstage to join the crowd of photographers. I recall being disturbed at the lax security, but still—there I was, shooting near-portrait photos of this Nobel Peace Prize winner, the brave, regal woman who had stood up for democracy against a brutal military dictatorship. It was a thrill. 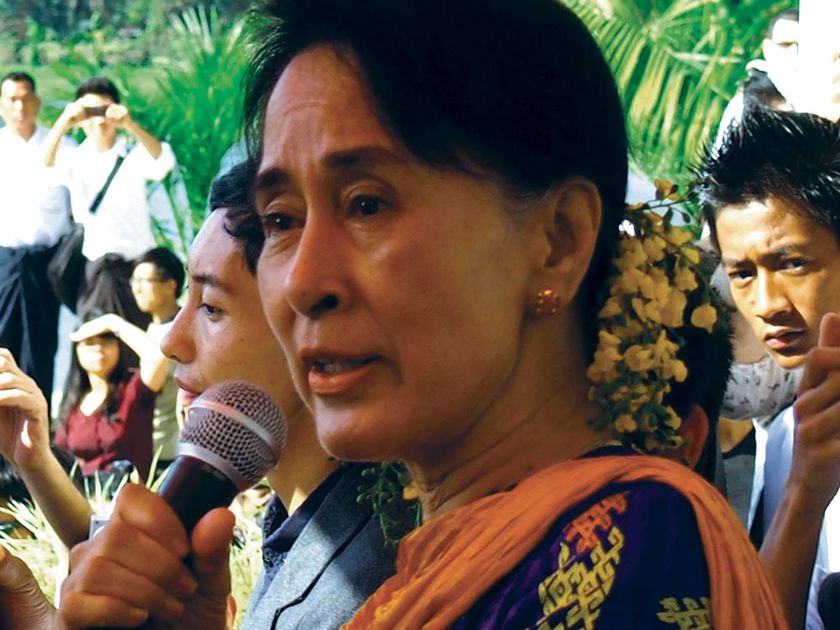 Today I don’t brag about those photos quite so much. There are a lot of people demanding that Suu Kyi’s Nobel Prize be revoked. Now a powerful figure in the government of Myanmar, Suu Kyi has been either silent or dismissive as the country’s Muslim Rohingya minority has been subjected to an ethnic cleansing campaign by the country’s military. Once an international beacon of liberty whose 2012 meeting with President Barack Obama seemed symbolic of a new dawn for her troubled country, she has recently derided reports of military atrocities as “fake news.” This Lady Liberty seems to have feet of clay.

Fallen angels have been with us since Lucifer was cast out of Heaven. The cause of the saint’s downfall can be a specific revelation of wrongdoing, such as drug use (Lance Armstrong), a more general realization that the exalted figure is not who supporters thought (Julian Assange) or the discovery of rank hypocrisy (Jim Baaker, Jimmy Swaggart or any number of other TV evangelists). How is it that we misjudge our icons so badly? And whose fault is it anyway?

Suu Kyi gained her heroic status in the 1980s as she championed democracy against the military rulers of Myanmar, formerly known as Burma. In 1990 her party won a massive electoral victory but the military refused to accept the results, and Suu Kyi was placed under house arrest, where she would remain for 15 of the next 21 years. Known to many in Myanmar simply as The Lady, she ranked with figures like Nelson Mandela and the Dalai Lama as defiant standard-bearers for moral and democratic values. Her picture was everywhere in Yangon—one woman I spoke to there said simply, “She is like my mother.”

The daughter of a top general who was assassinated just two years after her birth, Suu Kyi had a privileged upbringing and was educated at Oxford. She returned to Burma in 1988 to lead the fight for democracy, an indisputably courageous stand that placed her in serious personal danger. Suu Kyi was released from house arrest in November 2010. Despite being barred from running for president, she was, and is, recognized as the country’s most powerful political leader. She was granted honorary Canadian citizenship in November 2012. But by that time she had already expressed doubt that the Rohingya community, who have lived in her country for generations, are truly citizens of Myanmar. A lifelong Buddhist, Suu Kyi appears to be as committed to her base as any politician. And in Buddhist Myanmar there is little support for the Muslim Rohingya. (Although there has long been a Muslim community in the country, many Burmese Buddhists connect the arrival of Muslims with the era of colonial British rule, a period when Muslim immigration increased.)

If Suu Kyi has fallen short of an iconic standard, that standard is surely exemplified by Nelson Mandela. The late president of South Africa has become the figure against whom all modern global statesmen and women are measured. It’s not as though Mandela’s political history is morally unambiguous—unlike Mahatma Gandhi, Mandela was not a proponent of non-violence. British Prime Minister Margaret Thatcher called Mandela’s African National Congress “a typical terrorist organization.” But the self-evident righteousness of his anti-apartheid cause and his unflinching dignity over decades of imprisonment made Mandela an international hero and the focus of the worldwide anti-apartheid movement. Most importantly, when Mandela was finally released from prison in a nation that many assumed must be headed for bloody civil war, he used his moral authority to help guide South Africa to a future based on reconciliation instead of recrimination. “Courageous people do not fear forgiving,” Mandela said.

Mandela’s status as a giant is well earned. But the process of enshrining Mandela as a secular saint has involved a degree of editing to remove nitty-gritty details, such as the disputes within the ANC or the failures of his government to deal with crime, corruption, and the AIDS epidemic. That’s not necessarily a bad thing—Mandela’s legacy is built on the main themes of his life and career, which are worthy of celebration. The creation of heroes almost always involves an element of streamlining. It’s a form of grassroots marketing. Unlike the calculated launch of a new car or soft drink, this can be a sort of collective process with media, government leaders, and the public seizing upon a prominent figure as the embodiment of an ideal. The result can be the glorification of a truly inspiring example, even if the process reduces a former human to a symbol. The motives may be pure but the process always involves a degree of simplification. A true icon can’t be too complicated.

Our own prime minister is a case in point. Justin Trudeau is still solidly popular across Canada, but his international image is something else again. Trudeau is a rock star. He makes it into American late-night talk show monologues as a political matinee idol, a burning hunk o’ love topped with fetching curls and espousing enlightened ideals of tolerance and gender equality—in essence, as the anti-Donald Trump. It’s the kind of spontaneous marketing campaign in which a person becomes an ideal and all nuance is lost.

Meanwhile at home Trudeau’s profile is necessarily more complicated. International audiences care little about tax plans, pipeline politics, or broken promises of electoral reform. The Trump-hating world needs a symbol, and Trudeau is made to order. The further away from Canada you get, the simpler his portrait becomes. Jesus said that a prophet is without honour in his own land; he might have added that perhaps it’s because the locals know too much about him.

Sometimes the fall of a public icon is straightforward: an individual gains fame, wealth and/or power by selling themselves as an exalted or morally righteous figure only to be eventually revealed as a fraud, a hypocrite, or both, perhaps in a motel room with a cheerleader, perhaps in a locker room with a syringe, or perhaps in the Oval Office without a clue. But other examples of the fallen idol are decidedly more complex.

A hero-to-villain transformation might turn on the colour of your politics. In 2010 Julian Assange emerged as a star for people who championed freedom of information after his organization WikiLeaks released videos and documents revealing alleged war crimes by U.S. forces in Iraq and Afghanistan. Attempts by the U.S. government to prosecute Assange and WikiLeaks only reinforced his status as a heroic truth-teller. Those who were appalled at possible U.S. war crimes saw Assange and WikiLeaks as warriors for truth. Assange was fighting the power.

Fast-forward to 2016 and WikiLeaks is apparently engaged in an attempt to undermine the presidential campaign of Hillary Clinton, collaborating with Russian espionage organizations to smear the Democratic nominee while declining to release any incriminating information on Republican nominee Donald Trump. Horrified progressives discover that those who decline to abide by laws and authority will not necessarily abide by your particular moral code either. Worse still, they may have been playing by someone else’s rules all along—in the case of WikiLeaks, possibly rules dictated by Vladimir Putin. The heroic David standing up to mighty Goliath is thus transformed into the treacherous stooge of your enemies, without ever really changing his behaviour.

FBI Director James Comey travelled in the other direction on the political-hero-worship spectrum. When he announced a new investigation of Clinton just days before the election, he was Darth Vader to Democrats. When he later stood firm against Donald Trump and was subsequently fired, many of the same Democrats cheered him as a shining example of public integrity.

The fact is we never really knew much about Aung San Suu Kyi. Had she been allowed to take office in 1990 she might quickly have revealed herself as a thoroughly ordinary politician. Instead she was imprisoned and became a symbol of defiance to tyranny. Now her political career has resumed and perhaps we are discovering who she was all along.

Ironically, when President Obama travelled to Myanmar in 2012 he was warned not to be fooled by the “mirage of success” in Burma. Difficult years lie ahead, he was told. Obama’s cautious advisor: His fellow Nobel Peace Prize winner, Aung San Suu Kyi.