Thursday’s [28 Sep] auction was a juicy meal for the 32 corporate bidders, which included such major Western energy giants as Shell, ExxonMobil, and BP. Unprecedented in size and in the opposition it provoked, the auction fit neatly into Temer’s neoliberal agenda for Brazil.

Brazilian residents and Amazon indigenous leaders protest Brazil’s president Michel Temer, outside New York’s Palace Hotel while he dines with US president Donald Trump on September 18, 2017 in New York. Temer is mired in corruption scandals, and is under fire for measures that environmentalists say are an attack on the Amazon rainforest. (Bennett Raglin/AP for AVAAZ)

2 Oct 2017 – Indigenous and environmental activists scuffled with security guards after attempting to enter and interrupt an auction organized by the unelected President of Brazil, Michel Temer, last Thursday. Activists were particularly incensed that the auction was set to sell ancestral indigenous lands in the state of Minas Gerais to mining interests, as well as open up coastal areas to unorthodox exploration and resource extraction methods by foreign oil and gas companies.

The auction, the 14th of its kind in Brazilian history, was touted as part of the government’s wider efforts aimed at mitigating the consequences of the worst economic recession in its history — efforts that closely follow the neoliberal model of privatizing public assets by selling or auctioning them to foreign corporations. Previous auctions, the last of which occurred in 2015, were significantly smaller in scope in terms of the funds generated and the resources up for sale, with the focus usually on oil and gas reserves.

However, this year’s auction also included critical parts of Brazil’s electrical grid as well as its national mint, up for bid in an effort to attract “foreign investment.” Administration officials had hoped that strong participation from foreign companies and investors would signal renewed faith in Brazil’s neoliberal “recovery.”

Thirty-two corporations took part in Thursday’s auction, which sought to generate up to $80 billion in foreign investment. Many Western energy companies — including Shell, ExxonMobil, BP and Total — participated. All were ostensibly eager to obtain access to Brazil’s rich oil and gas reserves, many of which are located in indigenous or ecologically fragile territories. ExxonMobil alone purchased $1.2 billion in oil rights during the auction.

Parts of the Brazilian electric grid sold for far less. Electrobras, the state-run electricity company, ultimately auctioned off its electricity distribution subsidiaries for a single real, valued at approximately $0.30. According to Reuters, the obscenely low price was due to Electrobras’ outstanding debts and Brazil’s state plan of privatizing the currently public utility by next year. 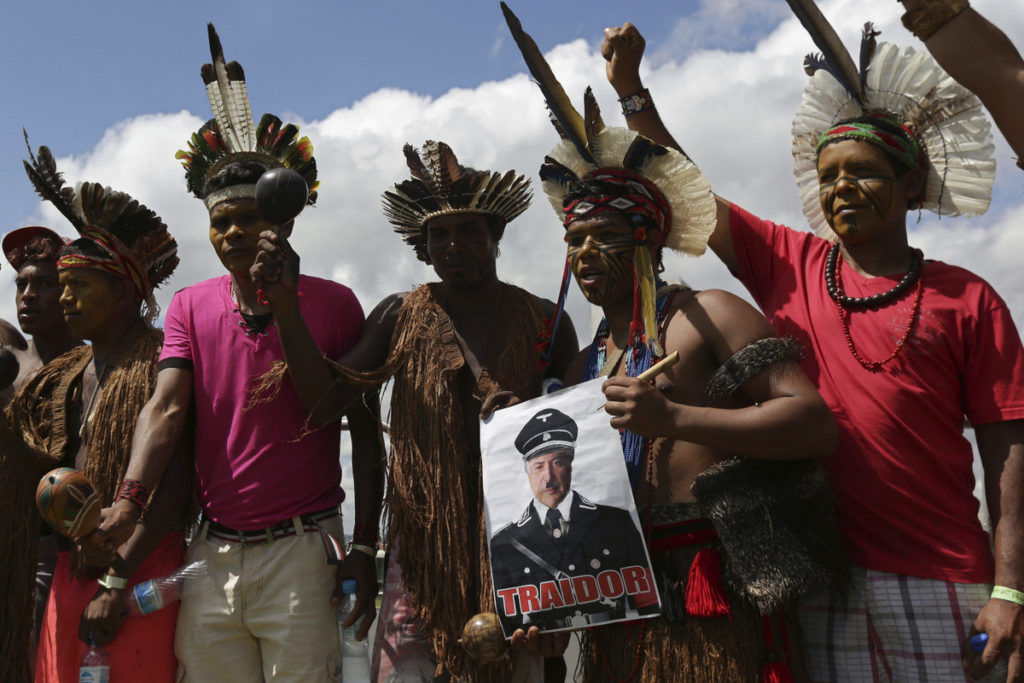 Nicole Figueiredo, director of the NGO 350.org for Latin America — which advocates for environmental protection and indigenous rights — told AFP that the Temer government was offering foreign companies the ability to use “unconventional” means, including hydraulic fracturing or “fracking,” to extract and explore for oil and gas in the regions up for bidding. Indigenous groups have expressed their concern that fracking, in particular, could destroy their communities’ water sources and endanger their livelihoods.

Exxon Acquires $1.2B Worth Of Oil Blocks In Brazil Auction https://t.co/d4N6fhWoYy pic.twitter.com/MyRCdDnmUa

Indigenous activists and environmental activists were not the only ones critical of the auction, which was widely condemned throughout Brazil. Even members of Temer’s own party were lamenting the fact that the Temer government had sold four hydroelectric plants “for the price of bananas,” as the utilities were sold well below their market value.

In addition, the price to participate in the auction was significantly lower than that charged by previous administrations in similar auctions. In 2013, subscription fees for that year’s auction totaled R$ 2.8 million (~ $879,000) per participating business while the latest auction charged only R$ 500,000 (~ $157,000).

This, not surprisingly, weakened the Temer administration’s arguments that the auction was intended to help the Brazilian economy recover. At bargain-basement prices, it looked instead to be simply a giveaway of Brazilian resources to foreign business interests. 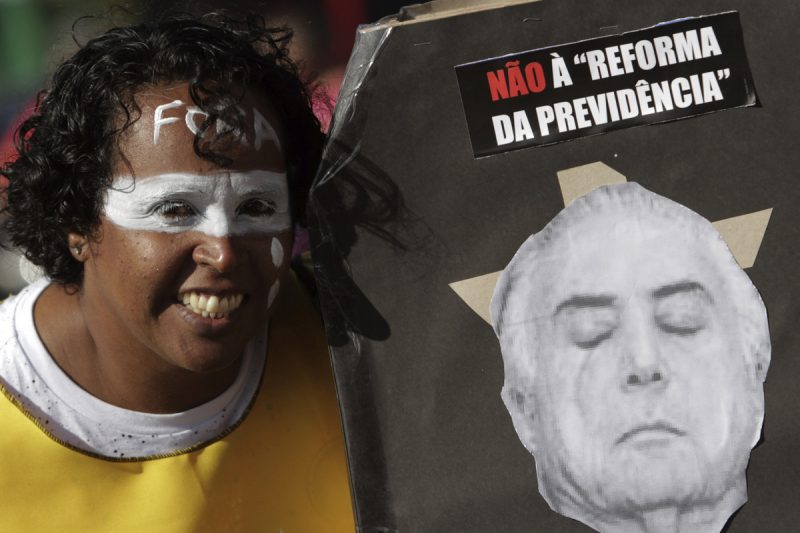 A woman, with the Portuguese word for “Out” painted on her forehead, poses next to a montage featuring Brazil’s President Michel Temer and the message “No to welfare reform”, during an anti-government protest in Brasilia, Brazil, May 24, 2017. (AP/Eraldo Peres)

This is hardly the first time that Temer and his administration have been accused of favoring foreign corporate interests at Brazil’s expense. Temer, a notoriously corrupt politician, has strong ties to many corporate sectors, particularly mining and industrial agriculture, as do many of his ministers, and the reforms they have carried out have largely favored corporate interests.

For instance, earlier this year, Temer opened more than 400 national and state parks, many of them in the Amazon rainforest, to foreign mining companies. One of these protected areas, the sizable Renca reserve, was saved at the last minute by a Brazilian court, which blocked the exploitation of the area in a humiliating defeat for Temer.

Also this year, Temer largely defunded the agency responsible for protecting the Amazon — along with its indigenous inhabitants — from illegal loggers, miners and farmers operating in the area. This measure was largely blamed for the recent massacre of uncontacted tribesmen by illegal gold miners deep within the Brazilian Amazon, as well as for the rise in extrajudicial killings of environmentalists and indigenous activists.

Temer has further stated publicly that his predecessor, Dilma Rousseff, was removed from power in 2016 — a move many observers have labeled a coup — due to her opposition to the neoliberal reforms his administration now champions. Temer’s publicist later revealed that the coup against Rousseff was largely corporate-funded. Wikileaks has also revealed that Temer has strong connections to the United States, having allegedly served as an informant for U.S. intelligence.

While Temer’s time as president has been a boon for private business interests, particularly Western corporations, it has largely been a nightmare for Brazilians, who overwhelmingly oppose his regime. Indeed, Temer is one of the world’s most unpopular leaders, with a dismal approval rating of 3.4%. In fact, Temer’s presidency is so despised throughout Brazilian society that some Brazilians are now clamoring for a return to military rule over the country’s thoroughly undermined democracy.