Nearly 500,000 People Have Fled to Bangladesh in the Past Month 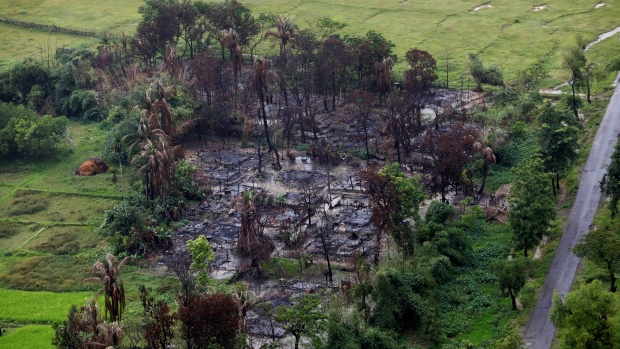 27 Sep 2017 – Myanmar’s government will manage the redevelopment of villages torched during violence in Rakhine state that has sent nearly half a million Rohingya Muslims fleeing to Bangladesh, a minister was reported today as saying.

The plan for the redevelopment of areas destroyed by fires, which the government has blamed on Rohingya insurgents, is likely to raise concern about prospects for the return of the 480,000 refugees and compound fears of ethnic cleansing.

Citing a disaster management law, he said in a meeting with authorities on Tuesday that redevelopment would “be very effective.” The law says the government oversees reconstruction in areas damaged in disasters, including conflict.

There was no elaboration on any plan or what access to their old villages any returning Rohingya could expect. The minister was not immediately available for comment. 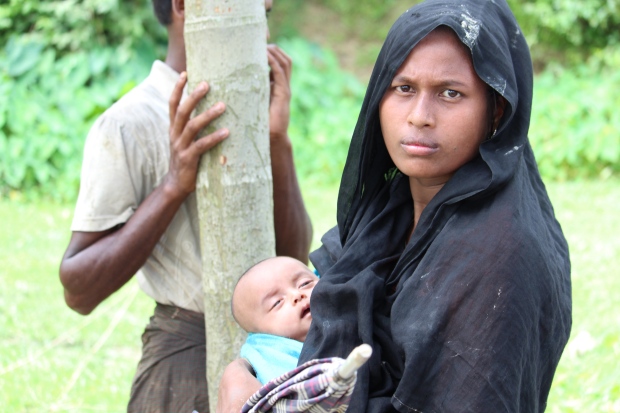 Noor Asha holds her newborn Yasir, born just a couple of days before violence erupted on the Myanmar side of the border.
(Stephanie Jenzer/CBC)

Human rights groups using satellite images have said about half of more than 400 Rohingya villages in the north of Rakhine state have been burned in the violence.

Refugees arriving in Bangladesh have accused the army and Buddhist vigilantes of mounting a campaign of violence and arson aimed at driving Rohingya out of Myanmar.

Buddhist-majority Myanmar has rejected UN accusations of ethnic cleansing against Rohingya Muslims in response to co-ordinated attacks by Rohingya insurgents on the security forces on Aug. 25.

The government has said about half of Rohingya villages have been abandoned, but blames insurgents of the Arakan Rohingya Salvation Army for the fires and for attacking civilians.

The government says nearly 500 people have been killed since Aug. 25, nearly 400 of them insurgents. It has also rejected accusations of crimes against humanity, levelled this week by Human Rights Watch.

The crisis has led to tension between Myanmar and Bangladesh.

Bangladesh said it had protested to Myanmar about the seizure of a Bangladeshi fishing boat by Myanmar authorities on a border river on Tuesday. Myanmar officials were not available for comment. 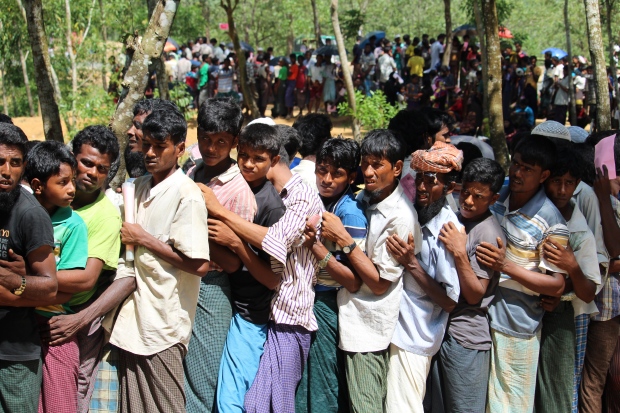 Aid groups say the number of Rohingya refugees who have fled to Bangladesh since Aug. 25 has risen to 480,000. Many don’t think they can return to Myanmar. Stephanie Jenzer/CBC)

The violence in Rakhine state and the refugee exodus is the biggest crisis the government of Nobel Peace Prize laureate Aung San Suu Kyi has faced since it came to power last year in a transition from nearly 50 years of military rule.

Myanmar regards the Rohingya as illegal immigrants from Bangladesh and bouts of suppression and strife have flared for decades. Most Rohingya are stateless.

Suu Kyi has faced scathing criticism and calls for her Nobel award to be withdrawn. She denounced rights violations in an address last week and vowed that abusers would be prosecuted.

She also said any refugees verified as coming from Myanmar under a 1992 process agreed with Bangladesh would be allowed back. 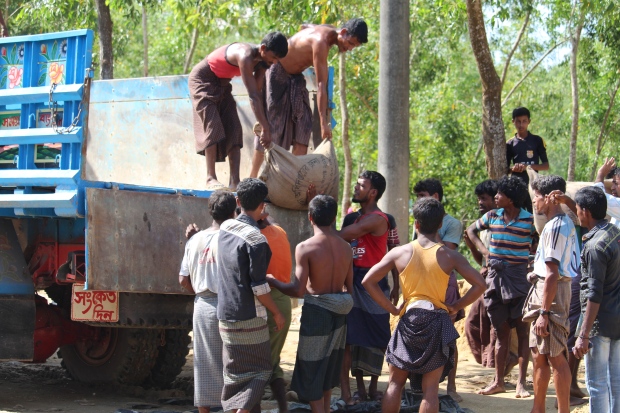 Organizations like the World Food Program are struggling to distribute food to refugees. (Stephanie Jenzer/CBC)

But many refugees are gloomy about their chances of going home, saying they fear they lack the paperwork they expect would be demanded to prove they came from Myanmar.

Myanmar is due to take a party of diplomats to the conflict zone on Thursday to let them see the situation.

A group of aid organizations said Tuesday the total number of refugees who had fled to Bangladesh since Aug. 25 had been revised up to 480,000, after 35,000 people were found to have been missed out of the previous tally.

Aid agencies say refugees are still arriving, though at a slower pace, and they have a contingency plan for a total of 700,000 new arrivals, since August.

Myanmar is cause and solution: UN

That figure is part of an overall plan to help 1.2 million people, including 200,000 Rohingya already in camps in Bangladesh and 300,000 people in “host communities,” or people helping refugees who also need aid.

“They have absolutely nothing,” UN High Commissioner for Refugees Filippo Grandi told a news conference in Geneva after returning from a visit to the camps in Bangladesh.

“It is very clear the cause of this crisis is in Myanmar but that the solution is also in Myanmar,” he said.

“The risk of spread of terrorist violence in this particular region is very, very high” unless the issue was resolved, he warned.

Grandi said he had not been informed about government plans for redevelopment but it had to include all communities.

“If development is not inclusive, it will not be addressing the root causes and solve the problem,” he said.