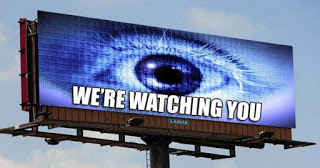 28 Sep 2017 – Imagine driving down a highway and seeing a personalized billboard ad directed at you. Now imagine advertisers using billboards to send messages to your smartphone.
That’s the future of’ ‘advertised spying’ in America. (Yes, I made that term up.)

An article in McClatchy, warns that a new generation of “smart digital billboards will detect the make, model and year of oncoming vehicles and project ads tailored to the motorist.”

The article ominously warns, that smart billboards can guess a motorist’s home address, age, race and income level based on the vehicle they are driving. And also claims, advertisers will be able to send messages to a person’s smartphone as they pass by a smart billboard.

Companies like SYNAPS want to create a network of spying billboards.

SYNAPS, boasts about ‘designing intelligent sensors that recognize car models and help a billboard choose the best message for their drivers’.

SYNAPS, describes how advertisers can personalize their advertising…

“It really is up to you to choose who will see your advertising – and it does not matter, where the billboard is. Pick your segment based on a specific car model and age, car price or size or even how conservative or modern it is.”
(Source)

SYNAPS, appears to have gotten it’s start in Russia, as a recent article in MIT Technology Review points out.

Co-founders Alex Pustov and Alesky Utkin expect to be operating 20-50 smart billboards in Russia this year. They also claim, to encrypt all the license plate data they collect.

Would you trust a foreign company with your license plate data?

What is MIT’s connection to SYNAPS?

According to SYNAPS, their American business is located at MIT’s Martin Trust in Cambridge, Massachusetts.

What does Martin Trust do?

They claim to supply students with ‘support and connections to become effective entrepreneurs’.
Martin Trust also claims, they nurture and assist new companies and make sure they have long-term success.

Can smart billboards spy on cellphones?

The McClatchy article warned, that smart billboards can spy on cellphones.

“Smart billboards can also target motorists on the highway or pedestrians passing bus shelters by picking up cellular or mobile signatures, WiFi signals or even beaconing given off by certain apps.”

Unfortunately, universities helping companies or government agencies to spy on the public has become the norm. (Click here to read how 200 universities are working with DHS.)

Why would anyone trust a foreign company with our license plate and cellphone data? Will American law enforcement have access to that data? How long does SYNAPS store the data for?

Last year, Yahoo patented a smart billboard that uses cameras and microphones to spy on everyone.

There’s no getting around it, smart billboards are really corporate ‘advertised spying’ devices.

The official party line is to say the data they collect is anonymized. But as I have stated numerous times, that’s not the case. (Click here, here & here to find out more.)

We should assume that law enforcement will have access to smart billboard data just like they have with CCTV cameras.

Smart billboards coupled with CCTV cameras will create a huge surveillance network that would rival the United Kingdom for the most spied on nation in the world.