The Fight Ahead: 13 Questions about the Origins, Objectives and War on BDS 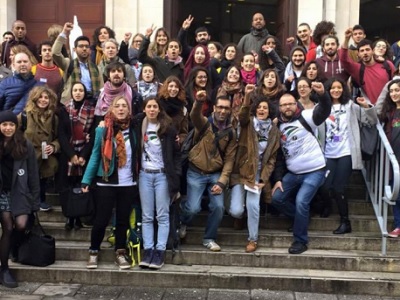 4 Oct 2017 – BDS stands for ‘Boycott, Divestment and Sanctions’. The BDS Movement was the outcome of several events that shaped the Palestinian national struggle and international solidarity with the Palestinian people following the Second Uprising (Intifada) in 2000.

Building on a decades-long tradition of civil disobedience and popular resistance, and invigorated by growing international solidarity with the Palestinian struggle as exhibited in the World Conference against Racism in Durban, South Africa in 2001, Palestinians moved into action.

In 2004, the Palestinian Campaign for the Academic and Cultural Boycott of Israel (PACBI) called for the boycott of Israeli government and academic institutions for their direct contributions to the military occupation and subjugation of the Palestinian people. This was followed in 2005 by a sweeping call for boycott made by 170 Palestinian civil society organizations.

What is the academic boycott?

PACBI has served as a medium through which the Palestinian point of view is articulated and presented to international audiences through the use of media, academic and cultural platforms. Because of its continued efforts and mobilization since 2004, many universities, teachers’ unions, student groups and artists around the world have endorsed BDS and spoken out in support of the movement.

Why is BDS important?

In the absence of any international mechanism to end the Israeli occupation of Palestinian land, and the lack of international law being enforced, as expressed in dozens of un-implemented United Nations resolutions, BDS has grown to become a major platform to facilitate solidarity with the Palestinian people, apply pressure on and demand accountability from Israel and those who are funding, or in any way enabling, Israel’s occupation of Palestine.

Is BDS a Palestinian or a global movement?

The call for BDS is made by Palestinian society. This is important, for no one has the right to represent the Palestinian struggle but Palestinians themselves.

However, the BDS movement itself – although centred on Palestinian priorities – is an inclusive global platform. Grounded in humanistic values, BDS aims to court world public opinion and appeals to international and humanitarian law to bring peace and justice in Palestine and Israel.

What are some of the historical precedents to BDS?

The boycott movement was at the heart of the South African struggle that ultimately defeated Apartheid in that country. Roots of that movement in South Africa go back to the 1950s and 60s, and even before. However, it was accelerated during the 1980s, which, ultimately, led to the collapse of the Apartheid regime in 1991.

There are many other precedents in history. Notable amongst them is the Boston Tea Party, protesting unfair taxation by the British Parliament; the Montgomery Bus Boycott in 1955 (which ushered in the rise of the Civil Rights Movement led by Martin Luther King. Jr.) and the Salt March led by Mohandas Gandhi in 1930 (which initiated the civil disobedience campaign that was a major factor leading to India’s independence in 1947.)

All of these are stark examples of popular movements using economic pressure to end the subjugation of one group by another. BDS is no different.

What are BDS’ main demands?

The BDS movement has three main demands. They are:

From where does BDS derive its support?

The BDS movement is the collective expression of the will and aspirations of the Palestinian people, who serve as the backbone of the popular, de-centralized movement.

Additionally, BDS is supported by conscientious people throughout the world, whether in their capacity as individuals, or as representatives of religious institutions, academic institutions, labour and professional unions, student groups and other organizations.

What is the main Israeli argument against BDS?

By equating any criticism of Israel and its right-wing government with anti-Semitism, Israeli supporters readily accuse BDS of being an anti-Semitic movement.

For example, the pro-Israel Anti-Defamation League (ADL) bases such an accusation on the premise that “many individuals involved in BDS campaigns are driven by opposition to Israel’s very existence as a Jewish state.”

Why do Israel and its supporters mischaracterize the Movement and its goals?

The above is one of many such claims aimed at mispresenting the BDS Movement. These claims are also meant to confuse and distract from the discussion at hand. Instead of engaging with internationally-supported Palestinian demands for justice and freedom, the anti-BDS campaigners disengage from the conversation altogether by levying the accusation of anti-Semitism against their detractors.

But is BDS anti-Semitic?

Not in the least. In fact, quite the opposite. BDS opposes the supremacy of any racial group or the dominance of any religion over others. As such, BDS challenges the Israeli legal system that privileges Jewish citizens and discriminates against Palestinian Muslims and Christians.

Does BDS undermine the ‘peace process’?

The ‘peace process’, which operated largely outside the framework of international law has proven to be a splendid failure. Talks that began in Madrid in 1991, followed by the Oslo Peace Accords in 1993, the Paris Protocol in 1994, Hebron Protocol in 1997, Wye River 1998, Camp David 2002, and other agreements and understandings only led to the cementing of Israeli occupation, tripling the number of illegal Jewish settlers and vastly expanding the illegal Israeli settlement network in the Occupied Territories.

In the early months of his first term in office, former US President Barack Obama, attempted to breathe life in the defunct ‘peace process’, only to be met with Israeli refusal to freeze the construction of illegal settlements. Eventually, talks ended and they are yet to resume.

The suffering of Palestinians is now at its worst since the Israeli occupation in 1967. Gaza is under a decade-long, suffocating siege; occupied East Jerusalem is completely cut off from the rest of Palestinian towns and the West Bank is divided into various zones – Area A, B and C – all under various forms of control by the Israeli army.

What are the Israeli and pro-Israeli efforts to challenge BDS?

The Israeli government has sponsored several conferences aimed at developing a strategy to discredit BDS and to slow down its growth. It has also worked with its supporters across North America and Europe to lobby governments to condemn and to outlaw BDS activities and the boycott of Israel in general.

These efforts culminated on March 23, 2017 with Senate bill S720 which, if passed in its current form, will make the boycott of Israel an illegal act punishable by imprisonment and a heavy fine.

What has the BDS Movement achieved, so far?

Top Israeli government officials perceive BDS as their greatest threat. It is the first time in many years that this form of non-violent civil rights action has registered so profoundly on the agenda of Israel’s political elite.

The massive campaign underway to fight and discredit BDS is a testament to the power and resolve of the civil-society centred Movement. Palestinians are determined to, someday, achieve their own ‘South Africa moment’, when Apartheid was vanquished under the dual pressure of resistance at home and the global boycott campaign.

Moreover, BDS is successfully pushing the conversation on Palestine away from the margins to the centre. It seems that, the more Israel attempts to thwart boycott efforts, the more opportunities BDS supporters have to engage the media and general public. The accessibility of social media has proven fundamental to that strategy.

Why are so many joining BDS?

BDS is growing because it is both a moral and legal obligation to support oppressed people and pressure those who violate international law to end their unwarranted practices.

Writing from his cell in Birmingham Jail, Martin Luther King Jr. wrote “Injustice anywhere is a threat to justice everywhere.”

Guided by such moralistic principles, BDS offers a platform for anyone who wants to demonstrate solidarity with the Palestinian people in their 70-year-long struggle for freedom, justice and human rights.