The path opened by Columbus to “The Americas” led to territories being conquered and claimed, stolen and shared by the Europeans. 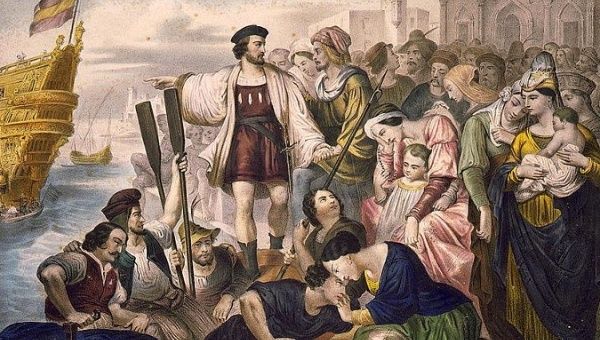 11 Oct 2017 – For years, Columbus Day has been annually observed in the USA on the second Monday of October.

It’s celebrated in honor of the 15th Century Italian navigator recorded in history as the “Discoverer of the New World,” but who actually paved the way for the ultimate destruction of entire civilizations through centuries of colonial and imperial domination of The Americas by Spanish, Italian, Portuguese, English, French, Dutch and other European conquistadors.

In 1492 when Christopher Columbus made his first journey seeking new worlds to conquer for the King and Queen of Spain, the Christian Crusaders were just concluding their routing of the Muslim Caliphate that had earlier dominated Europe.

Columbus originally set out looking for India, but after losing his way mistakenly landed instead in The Bahamas on the 12th of October, 1492.

Thinking he was in Asia, he made the following entry in his log about the native Arawak population: “They would make fine servants … With fifty men we can subjugate them all and make them do whatever we want.”

The path opened by Columbus to the “The Americas” led to territories being conquered and claimed, stolen and shared by the Europeans and left a long history of native genocide and slavery and systematic dismantling of ancient civilizations built over centuries before they arrived.

The settlers robbed land, outlawed native religions and forcibly introduced Christianity alongside slavery, for production of cotton, sugar and other crops.

Centuries of colonial domination followed, until the European powers were forced to cede absolute control, largely as a result of their proven inability to quell liberation wars and other forms of resistance, especially in the 18th and 19th centuries.

The “New World” came only at the cost of millions Native American and African lives, who, with their descendants, still remain largely edited out of their own history.

Columbus’ legacy is a brewed torrent of half-truths and lies presented over time to place him in world history as the one who “joined the two worlds” to introduce “Christianity, civility and humanity” to “Godless cannibals” in faraway lands.

But Europe’s decimating ravage of the Americas has been so exposed now that there is a growing movement across the continent to not just ban the celebration of Columbus Day, but also to replace it with a day dedicated to its indigenous peoples.

In 1992, the City of Berkley (California) became the first to rename the federally-designated Columbus Day as “Indigenous People’s Day.” In August 2017 – a full 25 years later – Los Angeles took a similar decision. Between the two, cities in Arizona, Colorado, Massachusetts, Minnesota, Montana, Ohio, Washington and Wisconsin did likewise.

Europe’s shaping of the contours of the region and its history eventually saw it labeled as “Latin America,” the result of a long process of imperial and colonial cultural domination and assimilation that led to Spanish emerging as the main language spoken across the South American continental shelf.

Today the backlash is continuing – and not only in America.

A Columbus statue in Los Angeles was defaced at the end of August 2017 following similar treatment of confederate statues elsewhere in the USA.
Public demands for unmasking of historical sinners presented as saints are also now being made in Australia, where a growing movement is demanding that the real history of the world’s biggest island be exposed.

Busts of British navigator Thomas Cook are also now being defaced across the continental island, with demands that he no longer be described as the one who “discovered” Australia.

In a country already inhabited by native Aborigines for eons when the first Europeans landed, there’s also a call for a new date for “Australia Day,” observance of which still coincides with the prevailing ancient imperial claim that life began “Down Under” only when Cook and his men landed.

Columbus and his successor explorers are now also being increasingly exposed as having been aided by maps drawn by earlier Chinese navigators.

Many of the myths associated with their claims have been exploded by ex-British Royal Navy submarine commander, Gavin Menzies, in his classic book entitled “1421,” with evidence that the first maps of the world were precise and near-accurate renditions by Chinese cartographers using astrological measurements and calculations.

Menzies’ book also shows how the famed Chinese navigator Zheng He had arrived in The Americas in 1421 – at least 70 years before Columbus.

The 600th anniversary of Zheng’s presence in The Americas is approaching and Menzies and today’s cartographers of true world history will (hopefully) not let it pass unobserved.

However, 25 years after the 500th anniversary of Columbus’ first voyage of so-called discovery was celebrated in Spain, Italy, the USA, South America, the Caribbean and across the world, Native Americans are increasingly stepping-up their demands that his falsities be exposed and their true histories more widely disclosed.

The likes of Columbus and Cook, Rhodes and Lee, told many now-proven lies that are still (unfortunately) largely unknown and which today’s mainstream (especially European) historians are simply too ashamed to acknowledge, far less admit.

The loud and just demands across The Americas, Australia, Southern Africa and Europe for revisiting and more accurately rewriting history are far from being fully met, but are by no means dead.

Instead, they are being kept quite alive by those convinced that it’s never too late to correct world history, especially where it’s been deliberately distorted and presented with clear intention to mislead.

Columbus has long been exposed in the Caribbean, where reggae musicians like Burning Spear decades ago wrote the song which boldly claimed “Christopher Columbus is a damn blasted liar” and calypsonian The Mighty Shadow, who also sang “Columbus lied!”

Then, on Tuesday October 10, the Daily Express of Trinidad & Tobago reported that “The Christopher Columbus monument in Port of Spain has been smeared with red paint intended to symbolize the 14th century explorer’s genocide of Caribbean First Peoples as the activist group Cross Rhodes Freedom Project aims to have the statue removed.”