16 Nov 2017 – From January 2018 the use of wild animals in circuses will be forbidden by Irish law. New regulations have been introduced in the Irish Animal Welfare Act to come in line with modern day animal welfare standards. It will see the end of the likes of tethered elephants and caged tigers in circuses across Ireland. 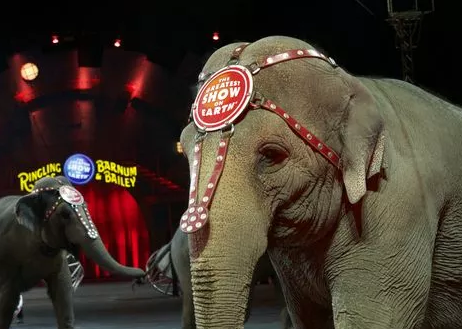 Ferreting is legal in Ireland. This act consists of sending a ferret down a rabbit hole to trap the unfortunate rabbit or chase it out. Disgusting terms are used to describe the different characteristics of ferrets such as an ‘eye ferret’ and ‘brain ferret.’ The eye ferret blinds the rabbit and I don’t need to go into grisley details, all I will say is that a ferret can possess the sharpest of teeth.  The brain ferret sinks those razor teeth into the area between the rabbits ears, again I will not go into disturbing detail.

The rabbits that are caught alive are, in most cases, used as live bait for hounds. Usually they are bagged and put in a rolling cage to tease hounds before they are released for the hounds to chase and ultimately shred.  In any civilized country this would be considered an illegal and barbaric act but in Ireland it is considered sport.

Mink hunting is legal in Ireland. When otter hunting was outlawed in Ireland some years ago attention turned to mink who dwell in the same habitat as otters. Using pikes and hounds, mink are hunted from their habitat and immense damage can be done to this environment because of this human interference. Mink are considered a pest by some people and in some cases overpopulation may lead to the destruction of other species such as water fowl.  So one would think a specialist in wildlife services may be called in to tackle the problem in a humane way but, in Ireland this task is usually taken up by people who have little or no regard for the environment. In any civilized country this would be considered an illegal and barbaric act but in Ireland it is considered sport.

Fox hunting is legal in Ireland. While this thoroughly terrible sport is banned in England Scotland and Wales, the vile act of chasing and tearing a fox apart is considered a country sport in Ireland. This particular ‘sport’ done on horse back with a pack of hounds was the main pursuit of the landed gentry but in today’s Ireland the ‘sport’ of fox hunting is, to any modern mind, viewed as an unwanted legacy of a colonial past.

Foxes who run to ground have no chance as a terrier man, usually a deplorable who is usually not even a country dweller, is called upon with his terrier dogs and he sends the unfortunate canines down the hole after the equally unfortunate fox. Locating the fox by way of hearing the terriers barking, the fox is then dug out and thrown to the pack of waiting hounds. This is nothing more than fox baiting and those who call it a sport or even a countryside pursuit are nothing more than sadistic individuals.

Land is ripped up in pursuit of a fox, ditches are trampled and left scarred by this ‘sport’ carried out by people who delight in the sight of an animal screaming for mercy. Even as night falls, these animals are not safe from the bloodlust human. Under the cover of darkness the form of fox hunting, or indeed rabbit hunting, is called lamping or dazzling. This entails the use of an extremely powerful light that is shone at the rabbit or fox which dazzles the creature into a stupor while a dog is sent towards it, to finish it. In any civilized country this would be considered an illegal and barbaric act but in Ireland it is considered sport.

Hare coursing is legal in Ireland. The Irish Hare holds an important place in the biodiversity of the country but, it is pursued for the simple enjoyment of the simple minded few. In recent times this disgusting bloodsport was very nearly declared illegal by the government but, unfortunately it continues to be considered a legal sport thanks to some in parliament  who voted to keep what they see as a traditional country sport.

Ireland is one of the last places in the world in which Hare coursing is legal. Whereas fake bait or fake scents are used in coursing in some countries, in Ireland live Hares are cruely caught in nets,  taken from their habitats, put into crates and sent to holding pens for weeks and months until the start of the coursing season.

Each year the national parks and wildlife service hand out licenses for Hare coursing. The season which runs between August and February at over 70 venues across Ireland sees a Hare chased by two greyhounds. It wasn’t until the early 1990s that  greyhounds had to wear muzzels during Hare coursing but, even muzzled hounds do damage to Hares and when the season ends, many of these Hares are too injured to return to their habitats and those who do are too damaged to survive in the wild. In many cases, these Hares die during the course of this ‘sport.’ In any civilized country this would be considered an illegal and barbaric act, but in Ireland it is considered sport.

Sport should not involve the screams of an animal in pain, the gruesome sight of an animal torn to pieces, the deliberate destruction of the environment and the overall lust for blood. The five principals of the Animal Welfare act in Ireland mean nothing when these barbarically  backward sports continue to legally thrive. The ‘sport’ of fox hunting, Hare coursing and all other forms of bloodsports can be best described by a quote from Oscar Wilde: “It is the unspeakable in pursuit of the uneatable!”

Pauline Murphy is a freelance writer from Ireland.