Campaigner renounces honour rather than share it with Myanmar leader in protest over treatment of Rohingya Muslims. 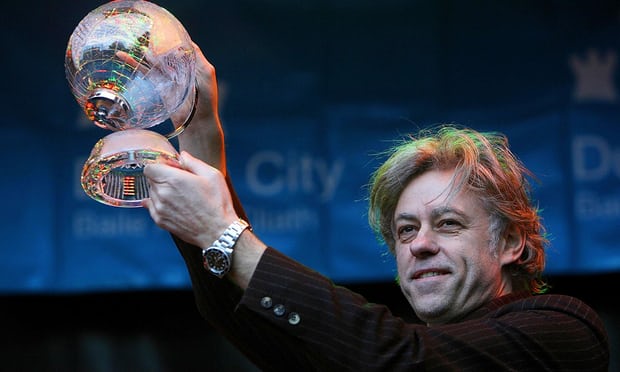 Bob Geldof receives the Freedom of the City of Dublin in 2006.
Photograph: Julien Behal/PA

13 Nov 2017 – Bob Geldof called Myanmar’s leader, Aung San Suu Kyi, “a handmaiden to genocide” today as he returned his Freedom of the City of Dublin award in protest over his fellow recipient’s response to the repression of Rohingya Muslims.

The political activist and Boomtown Rats frontman said he would be a hypocrite to share honours with “one who has become at best an accomplice to murder”.

The Live Aid founder criticised the Burmese Nobel peace prize winner for her silence over military operations that have driven more than 600,000 Rohingya Muslims from Rakhine state in western Myanmar into neighbouring Bangladesh.

The UN has described the actions of the military as a “textbook example of ethnic cleansing”.

The politician, who had been seen as a champion of human rights, has drawn criticism for failing to speak out against the violence. There have been calls for her to be stripped of the Nobel peace prize she won in 1991.

Suu Kyi was given the Freedom of Dublin in 1999 while she was held under house arrest by Mayanmar’s then military government. She received her award at a reception in Ireland in 2012, two years after her release.

In a statement, Geldof said: “Her association with our city shames us all and we should have no truck with it, even by default. We honoured her, now she appals and shames us.”

He added: “In short, I do not wish to be associated in any way with an individual currently engaged in the mass ethnic cleansing of the Rohingya people of north-west Burma.

“I am a founding patron of the Aegis Trust, who are concerned with genocide prevention and studies. Its founders built and maintain the National Holocaust Museum of the UK.

“I spoke at the inaugural National Holocaust Memorial Day at Westminster and in my time, I have walked amongst peoples who were sectionally targeted with ethnic cleansing.”

Geldof, 66, who was born in County Dublin, has held the freedom of the city since 2005. He said that while he was a “proud Dubliner”, he could not hold the accolade alongside Aung San Suu Kyi.

He added in the statement on Sunday: “The moment she is stripped of her Dublin Freedom perhaps the council would see fit to restore to me that which I take such pride in. If not, so be it.”

Eighty-two individuals, including Nelson Mandela, Bill Clinton, and Michelle and Barack Obama, have been awarded the honour since its launch in 1876. The prize is reserved for those who have made a contribution to the city or Ireland.

The lord mayor of Dublin, Mícheál Mac Donncha, said the city council had discussed taking away the honour and the matter was still under review.

But Mac Donncha, a councillor for the Irish nationalist Sinn Féin party, also criticised Geldof’s gesture, saying it was ironic as Geldof held a British knighthood despite “the shameful record of British imperialism across the globe”.

Geldof’s latest criticism followed comments he made at the One World Summit in Colombia last month in which he described the Myanmar leader as “one of the great ethnic cleansers of our planet”.

U2, whose frontman Bono is a recipient of the honour as well, also criticised the 72-year-old in a lengthy statement on their website over the weekend.

The band wrote: “The violence and terror being visited on the Rohingya people are appalling atrocities and must stop. Aung San Suu Kyi’s silence is starting to look a lot like assent.”

Myanmar’s de facto leader is to be stripped of the Freedom of the City of Oxford after the city council voted unanimously to support a cross-party motion deeming it “no longer appropriate” for her to hold the honour. The council will have a meeting to confirm the move on 27 November.

The vote came as the college that she attended as an Oxford undergraduate placed her portrait in storage last month.

St Hugh’s College removed her picture from its main entrance just before the start of the academic year, saying in a statement: “The college received the gift of a new painting earlier this month which will be exhibited for a period. The painting of Aung San Suu Kyi has, meanwhile, been moved to storage.”