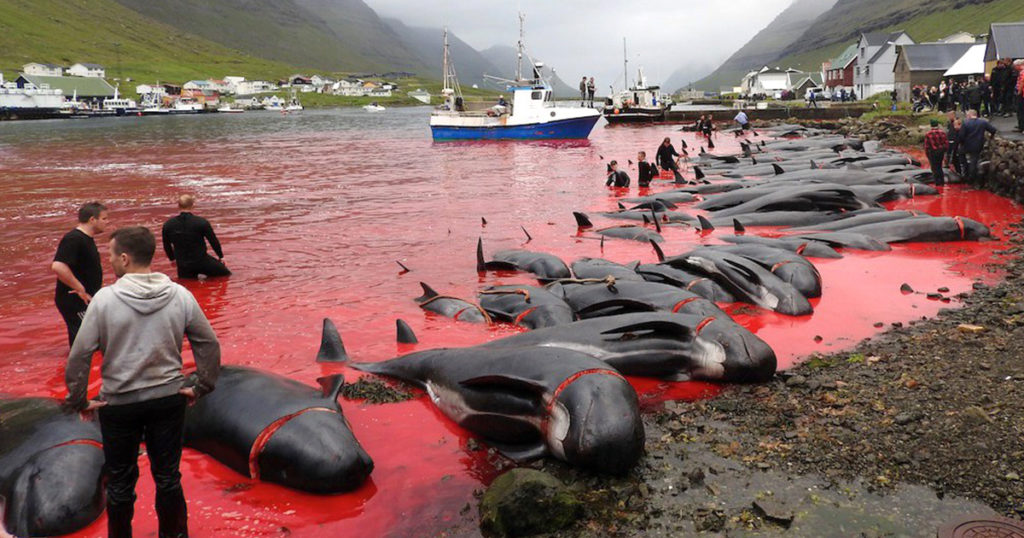 8 Nov 2017 – Sea Shepherd can now reveal that as part of our ongoing Operation Bloody Fjords we coordinated 10 weeks of covert land based patrols during July to early September this year in the Danish Faroe Islands. Report by campaign leader and Sea Shepherd UK Director, Robert Read.

Sea Shepherd Global has documented the grisly annual hunt and slaughter of pilot whales and dolphins in the Danish Faroe Islands. 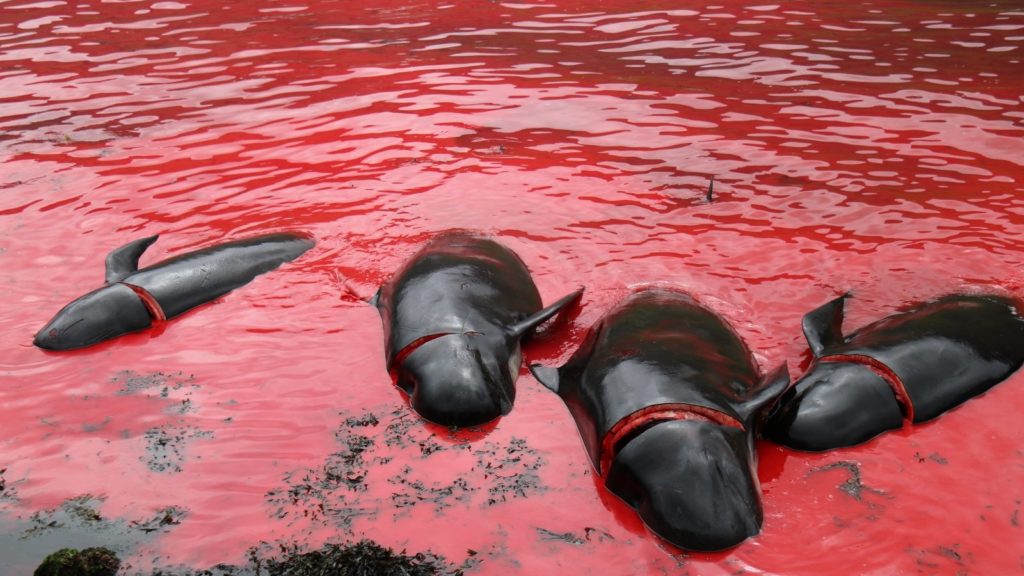 Over the course of ten weeks from this July to early September, the volunteers documented nine separate grindadráp events (what these yearly hunts are called in Faroese). According to the group, 198 Atlantic white-sided dolphins and 436 pilot whales were killed.

The Faroese whaling tradition, also known as a grind, has a recorded history since 1584. During a grind, island authorities allow a flotilla of boats to drive dolphins and whales into a shallow bay. The animals are then killed with a whaling knife that severs their spinal cord. 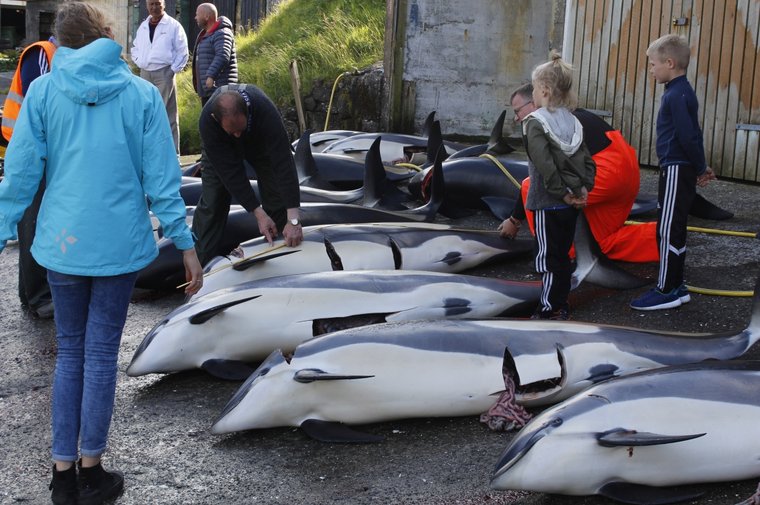 “We witnessed the whole process from the driving in of the 50 or so pilot whales through the slaughter, the butchering and the distribution of the meat and blubber,” said one volunteer in a statement provided to EcoWatch about the the Aug. 29 grindadráp in the village of Hvannasund.

“As the pilot whales were driven to the shoreline by the small boats the intensity of the thrashing bodies grew. Hooks were sunk into the blowholes and the whales were dragged onto the shore in a sadistic game of ‘Tug of War.’ We witnessed whales seemingly bashing their heads against the stones in a frenzy.”

Another witness at a July 25 dolphin hunt in the village of Sydrugota remarked about the crowds and children casually gathering at such a bloody scene.

“As we drove into Sydrugota we knew we were in the right place as the water was blood red, we continued towards the harbor and parked up, walked to the slipway to see 16 Atlantic White Sided Dolphins already had been slaughtered, lined up neatly in two rows, guts already spilled onto the concrete and spines severed, one thing I didn’t expect was the stench of blood. A crowd had gathered including small children who were poking the dolphins in the eyes while their parents watched.” 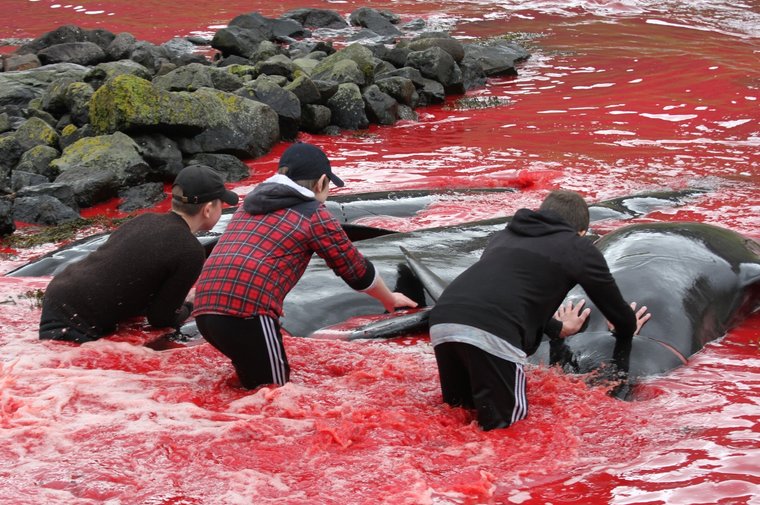 A witness at the Funningsfjordur hunt on Aug. 5—where more than 100 dolphins were killed—was similarly taken aback by this “disconnect.”

“Thoughts immediately turned to the disconnect between the image of people laughing, children playing and the barbaric scene before us at the waters edge. Many of the pod still laid on the beaches, blood flowing from the kill wounds, one dolphin with a wound so deep it had almost severed the head completely, parents could be seen taking their children down to see the bodies close up, one we observed even lifting their boy up to sit on the body of a dolphin as they took photos of him, the lack of any empathy for the lives that had just been brutally taken was clear, as was an insight into how future generations are already being exposed to this brutal act.”

“Sheep farming, whaling and fowling have enabled the Faroe Islands as an island nation to maintain a relatively high degree of self-sufficiency in food production,” the Faroe Islands government said in its statement. “In the Faroe Islands it is considered both economic and environmental good sense to make the most of locally available natural resources, and to maintain the knowledge required to use what nature can provide in a harsh oceanic environment.” 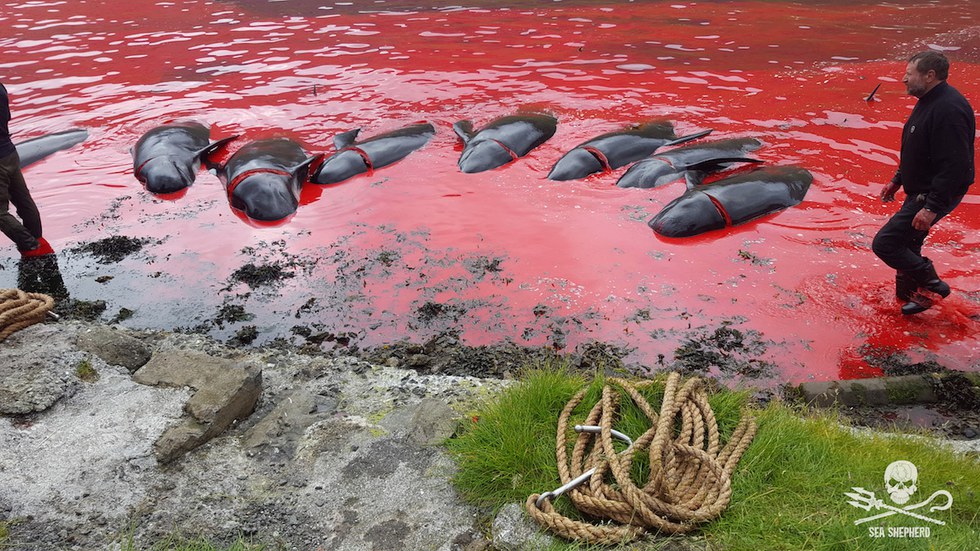 “Catches are shared largely without the exchange of money among the participants in a whale drive and residents of the local district where they are landed,” the statement continued. “Each whale provides the communities with several hundred kilos of meat and blubber—meat that otherwise had to be imported from abroad.”

The island government also criticized Sea Shepherd representatives for going “to any lengths to paint a negative picture of the Faroese whale hunt as ‘barbaric,’ ‘unnecessary,’ ‘evil’ and ‘lunacy’ describing Faroese as ‘sadistic psychopaths’ with the aim of inciting anger and outrage against the people of the Faroe Islands. They have chosen an easy target, as whale drives in the Faroe Islands take place in the open for anyone to watch and document.” 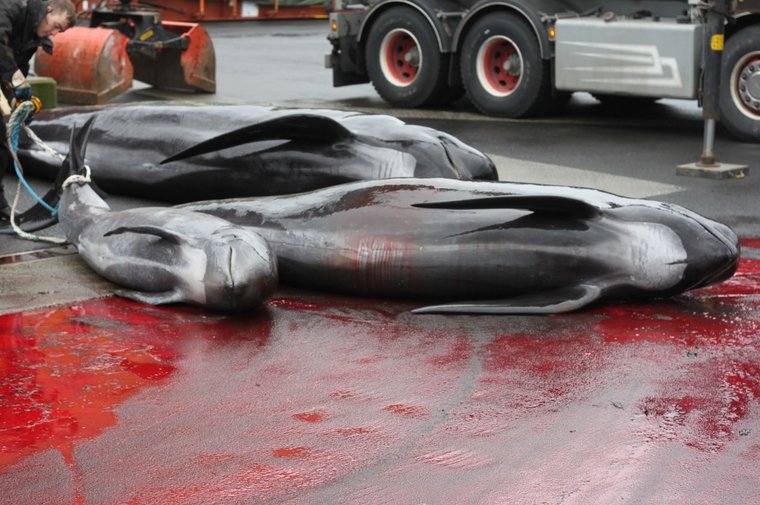 A family of pilot whales slaughtered in the Bour grind on August 31st.
Photo: Sea Shepherd.

Sea Shepherd, which has led campaigns to oppose the grind in the Faroe Islands since 1985, continues to speak out against this practice.

“2017 has proved to be one of the worst years for the grindadrap since the mid 1990’s by the men of the Danish Faroe Islands with 1203 pilot whales and 488 dolphins killed during 24 individual hunts so far,” Read said, urging people to support the Operation Bloody Fjords campaign to “help end this senseless slaughter.” 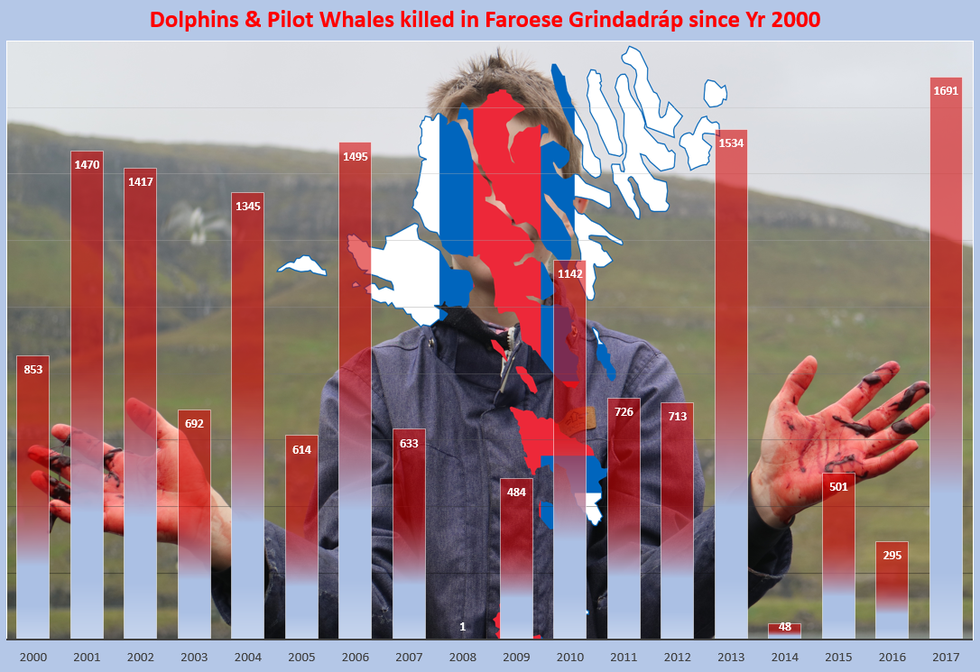