Iran, Russia and Turkey Agree to Hold ‘Syrian People’s Congress’ to Bring Together All Warring Sides 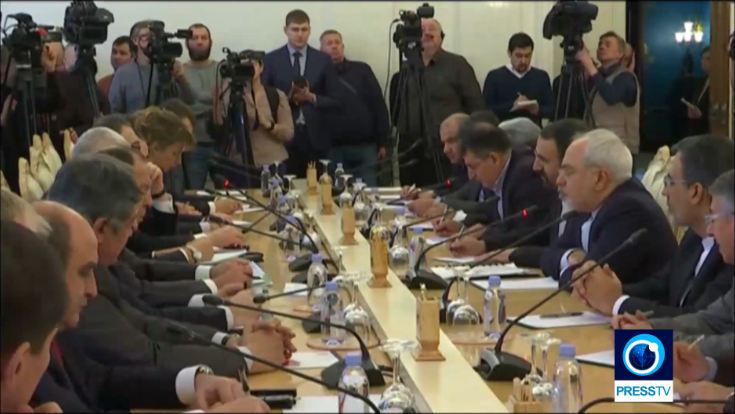 24 Nov 2017 – Russian President Vladimir Putin has said his Iranian and Turkish counterparts have supported a proposal to hold a “Syrian people’s congress” that will bring together government and opposition figures.

“The congress will look at the key questions on Syria’s national agenda,” Putin told reporters at the summit in the Black Sea resort of Sochi, sitting alongside Rouhani and Erdogan.

“First of all, that is the drawing-up of a framework for the future structure of the state, the adoption of a new constitution, and, on the basis of that, the holding of elections under United Nations supervision.”

The congress is expected to also take place in Sochi before the next round of Geneva talks on November 28. However, no details about the exact date or who will be invited to attend were released.

In a joint statement, the three leaders underlined the need for all warring sides to release all prisoners and hostages, hand over bodies and create the conditions for a lasting truce.

They also urged the international community to provide humanitarian aid, clear Syrian territory of mines and restore infrastructure wrecked by the long-running conflict.

Now in its seventh year, the war in Syria has killed hundreds of thousands of people and displaced more than 12 million.

Syrian opposition in Riyadh says Assad has to go

Syrian opposition groups meeting in Saudi Arabia have renewed their demand for the removal of President Bashar al-Assad in a draft resolution obtained by Al Jazeera.

The groups said that a solution to the war in Syria can only be achieved with the departure of Assad at the start of the transitional period – a position held by the Syrian opposition since the start of the war, now in its seventh year.

“The participants agreed that the goal of the political settlement is to establish a state based on the principle of citizenship, which enables the Syrians to draft their constitution without interference and to choose their leaders through free, fair and transparent elections in which the Syrians participate inside and outside Syria under the supervision of the United Nations,” the draft resolution reads.

The communique stipulates that a transitional governing body “could include members of the present government and the opposition and other groups and shall be formed on the basis of mutual consent”, but does not make any specific mention as to who exactly from the current government should stay on.

The ‘slow-motion slaughter’ of Syrian civilians

As the Syrian conflict entered its seventh year, about one million children have been orphaned by the war in Syria which is in its sixth year, according to an Aljazeera report.

More than 465,000 Syrians have been killed in the fighting, more than a million injured and over 12 million Syrians – half the country’s prewar population – have been displaced from their homes.

With much of Syria in ruins millions of Syrians have fled abroad. The Syrian refugee crisis remains one of the largest humanitarian crises since the end of World War II. The number of refugees who have fled the country now exceeds five million, including more than 2.4 million children, and millions more have been displaced internally, according to the United Nations.

The Syrian war is creating profound effects far beyond the country’s borders. Lebanon, Turkey, and Jordan are now housing large and growing numbers of Syrian refugees, many of whom have attempted to journey onwards to Europe in search of better conditions.

There are around one million Syrian refugees in 37 European countries.

Abdus Sattar Ghazali is the Chief Editor of the Journal of America (www.journalofamerica.net) email: asghazali2011 (@) gmail.com