Manus Island: Those for Whom We Cannot Grieve

As a nation, overcoming our fear of ‘the other’ and exposing our own vulnerabilities is the key to ending the crisis on Australia’s Manus Island. 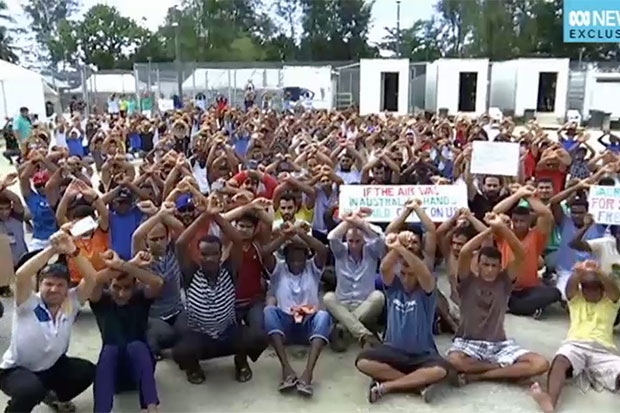 A screencap from an ABC News story, showing Manus Island detainees this week.

14 Nov 2017 – The 600 men trapped between the Manus Island detention centre and the unknown that comes next are people defined negatively as individuals. They are not defined, as they once were, as a member of a country, as a father, a son, a partner, a friend. Now, they have been hollowed out of all of these individualising, humanising factors.

Their individuality has been replaced by their collective status as the ‘other’, as an us and them. This other that permeates Australian political discussion is ‘boat people’, a term which does a masterful job of at of once denying individuals and their lived experiences, and binding them together into a collective they never asked for.

The current Australian government, and those which came before it, have been successful in moving refugees who arrive to Australia by boat not only physically out of sight, but out of the space in the human mind that is vulnerable to the suffering of others.

What I want to ask, then, is how do we give back humanness to those that have systematically been stripped of it?

Here Judith Butler is helpful. In her recent work, Precarious Life, Butler considers ‘what counts as human’ and what counts as a ‘grievable’ life. What we find in the language used to discuss those seeking asylum in Australia today, all the way back to the Howard era, is a refusal to acknowledge that these people are humans just like you and I. That in our human condition and the vulnerability that comes along with it, we are all human beings worthy of empathy.

The use of terms such as ‘boat people’, ‘queue jumpers’, as well as racially or ethnically based labels serve to push refugees out of this space of shared humanity. Of grievability.

However, Butler says that it is too simplistic to argue that the dehumanisation or ‘derealisation’ at the level of public and political discussion gives rise to a physical violence enacted against people. The inverse likewise does not get at the complexity of the matter. Perhaps we can say that the ordering is not important, but that way we the dehumanise refugees in Australia (and much of the so-called West) forms a justificatory loop is such a way that it becomes seemingly self-perpetuating. 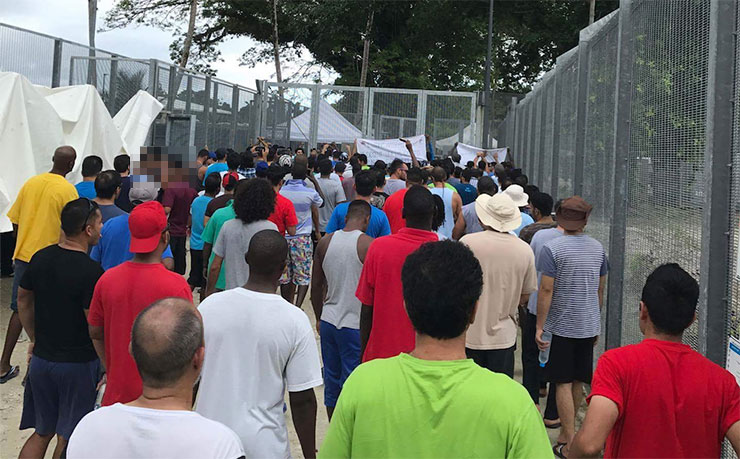 Manus Island detainees, at one of their daily protests.

This, I argue, is why despite all efforts to make Australians more aware of the unfolding humanitarian crisis on Manus Island, the UN chastisements of the Australian government, and news story after horrifying news story, the majority of Australians remain unmoved by the events unfolding in the last 12 days.

These 600 men on Manus exist in the Australian consciousness not as human beings who suffer, who are, as we speak dying. They have been dehumanised so that they do not exist as humans in any meaningful way.

The primary emotion that sustains such dehumanisation is fear. Such fear blocks both our capacity to think critically about a situation, and to emotionally engage with it in a way that makes us feel vulnerable.

This is nothing new. Fear of a mythologically demonised ‘other’ has been used to dehumanise throughout history.

In the context of the aftermath of the Holocaust, Alexander and Margarete Mitscherlich argue that socially instilled fear blocks the ability of people to critically engage with the world. Forfeiting the terminology of psychoanalysis used by the Mitscherlichs as much as possible, simply put, they argue that such a fear of an ‘other’ at the level of the collective unconscious of a society is able to make human beings less resilient to engage with critically or emotionally challenging situations. This is particularly so when it comes to situations for which we feel guilty.

The Mitscherlichs claim that such a fear is what can block us from recognising the unique humanness of others. Such an inability to recognise others as individuals is evident in the way that refugees are not spoken of as unique people who suffer, who want, who need. They are no longer human. Or close to not being human, but still human enough to constitute a threat.

The question then becomes: how do we bring those who have been – both politically and materially speaking – back into the humanity we all inhabit?

Right now, 600 men are fighting for their lives on Manus Island. Knowing that most Australians are not bothered by this does not provide them with food. It does not give them a safe place to sleep. It does not absolve us of the fact that all of us, as Australians, are complicit in this situation.

We are in too deep now to point fingers or be divided on this. Every one of us is playing a part.

My hope is that the discussion I have begun here can help us acknowledge that we are all vulnerable in this situation. Indeed, as Butler argues, it is vulnerability that for the basis of our shared humanity.

Elise Addlem is a writer and philosopher from Melbourne. Her work takes a philosophical perspective on politics, feminism and social issues.