Mass Shooters Are Disproportionately US Veterans

14 Nov 2017 – Are veterans of the U.S. military disproportionately likely to be mass killers in the United States? Asking such a question is difficult, first because of concerns of profiling, discrimination, etc., and second, because it’s hard to answer.

It’s important to answer because it’s important for us to know whether military training is contributing to this epidemic, a fact that (one must rush to say) would not somehow eliminate the roles played by gender, guns, mental illness, domestic violence, a violent culture, the mass media, economic inequality, or anything else.

Looking at this list of mass shootings in the United States, one notices the following:

Beginning to sort out an answer, one quickly discovers that many mass-killings by veterans have been excluded from this list. World War II veteran Howard Barton Unruh killed 13 people in 1949 in New Jersey, but that was too early to make it onto this list. Persian Gulf veteran Timothy McVeigh killed 168 in Oklahoma City in 1995 but didn’t use guns. Persian Gulf veteran Robert Flores shot his three nursing professors in Tucson, Arizona, in 2002, but only killings of four or more have been included. The same restriction keeps out U.S. Marine Corps veteran Radcliffe Haughton’s killing of three women in Wisconsin in 2012. Even the D.C. sniper, Persian Gulf veteran John Allen Muhammad, who killed 17 in the Washington, D.C., area in 2002, with a partner, and using guns, is not included — perhaps because he didn’t kill all of his victims at once. 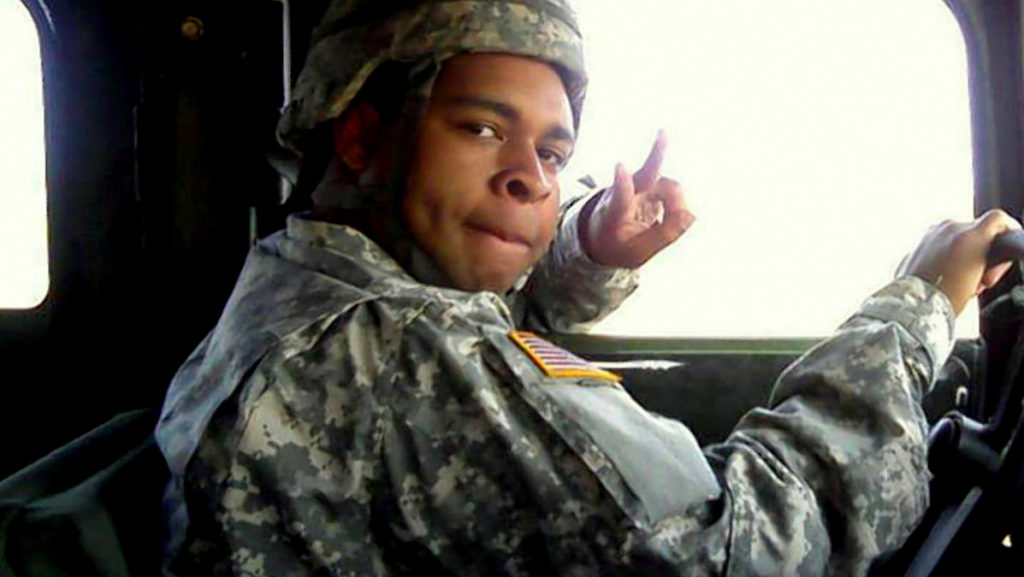 What percentage of U.S. mass shooters who are men between 18 and 59 are veterans? Deleting two shootings from the list that were done by females, and one that was done by a man and a woman, and deleting eight done by men too old or young to fall into our sample, we’re left with 83 mass shootings to look at. I then delete one that was an attack on the U.S. military by a foreign-born shooter, as it seems irrelevant to ask if that shooter had been in the U.S. military. That leaves a list of 82 shootings.

In quickly reading available news reports online about each shooting, I see that almost all of the shooters were born in the United States. And I am leaving in the sample list those few that were foreign-born, even including some who could not legally have joined the U.S. military had they wanted to. And I am not attempting to find out which shooters received military training from some military other than the U.S. I am also leaving on the list those who said their motivation for shooting was revenge for U.S. wars. And I’m leaving on the list but not counting as veterans two men who tried to join the U.S. military and were rejected, as well as one who worked at a U.S. Navy base but apparently not as a member of the Navy. I am leaving on the list and counting one whose military training was in JROTC, and about whom I do not know whether he had further military training.

Following a quick search of 82 shootings on the internet, I’ve been able to find that at least 28 of the shooters had been in the U.S. military (again, including the JROTC in one case). On the other side, I’ve been able to confirm very few of the shooters as having not been in the military. In several cases, I’ve had to read several articles before finding a mention of the military. In no case have I found a mention of having not been in the military. This leads me to strongly suspect that the number 28 undercounts the number of veterans in the sample. Nonetheless, that’s 34% of U.S. mass shooters who are military veterans, as compared with 14.76% in the general population for the same gender and age. In other words, veterans are over twice as likely to be mass shooters, and probably more likely than that.

Needless to say, this is a statistic about a large population, not information about any particular individual. Needless to say, profiling and discrimination are counterproductive. But here’s what else might be counterproductive: Training people in the arts of mass murder, launching wars, and dropping people trained for wars and having suffered through wars into a heavily armed society full of economic insecurity and the industrialized world’s leading lack of healthcare.

Of course, it’s possible that people inclined toward mass shootings are also inclined to join the military, that the relationship is a correlation and not a cause. In fact, I would be shocked if there wasn’t some truth to that. But it’s also possible that being trained and conditioned and given a familiarity with mass shootings — and in some cases, no doubt an experience of engaging in mass shooting and having it deemed acceptable — makes one more likely to mass shoot. I cannot imagine there isn’t truth in that.

Here are the shootings by veterans on this list:

Here are the shootings on this list that I have not been able to determine were by veterans:

David Swanson is an author, activist, journalist, and radio host. He is director of WorldBeyondWar.org and campaign coordinator for RootsAction.org. Swanson’s books include War Is A Lie and When the World Outlawed War. He hosts Talk Nation Radio.