This article and the above video include graphic images some readers may find disturbing.

1 Nov 2017 – An Oakland slaughterhouse, Saba Live Poultry, was occupied last weekend by more than 200 people, protesting the atrocious conditions in which animals are kept before being slaughtered. Oakland police arrested 23 people and charged them with trespassing, for entering the facility, filming abuses, and removing at least three animals for rescue.

Activists described seeing intense suffering, abuse, and cruelty. Video images — from the short film above produced by The Intercept — confirm their accounts. Live bunnies were standing atop the rotting carcasses of other rabbits. Chickens were stuffed into cages so tiny that they were prevented from breathing. Still-living quails and chicks had been thrown into trash cans along with dead ones. And many animals, who had not been given food or water for days, were cannibalizing one another in cages in a desperate, instinctive attempt to survive.

One of the activists, Priya Sawhney of Direct Action Everywhere, or DxE, said that walking onto the kill floor was “one of the most disturbing things I’ve ever seen in my life. We saw bodies of animals on the floor, bloodied heads of chicken, animal feet, blood everywhere.” She added, “In one of the trash cans I looked in, there were dead quail along with quails still alive, one of which I picked up to rescue.” 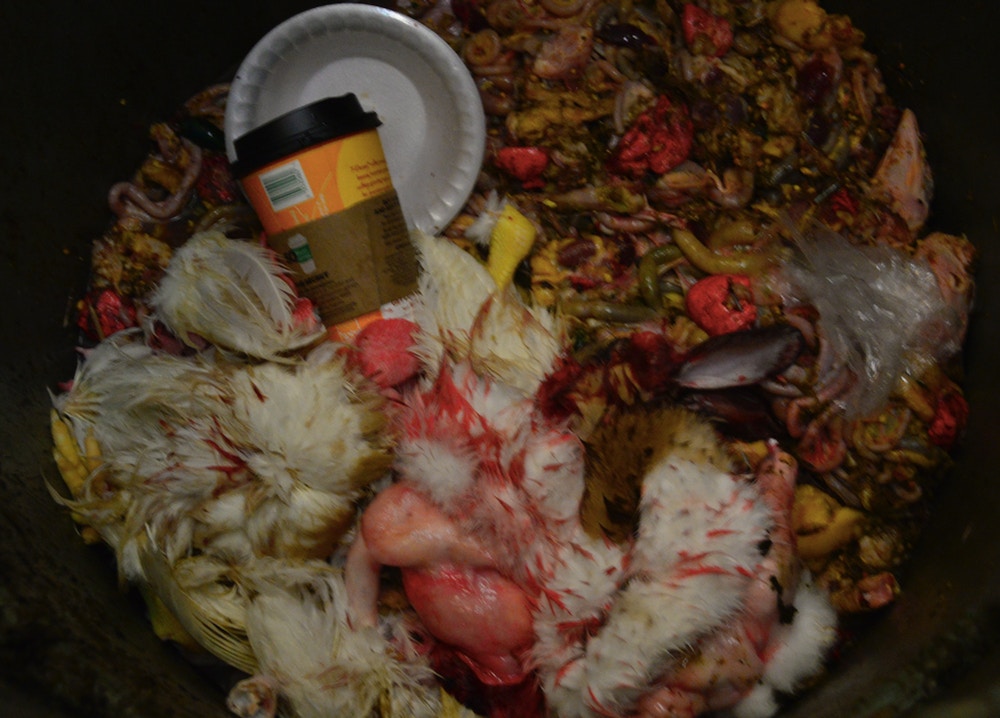 At least three animals — a rabbit, a quail, and a lamb — were rescued, brought to a veterinarian for medical care, and are now recovering at a shelter. The police prevented more animals from being rescued by barring re-entry and by arresting almost two dozen activists.

Another protester, Samer Masterson, a 23-year-old software engineer, described the scene as “disgusting,” even for someone like him who has seen dozens of equally horrific abuses at factory farms. “When I walked onto the kill floor, I wanted to throw up. The stench was overwhelming.” When looking around, he said, “all I saw were buckets full of dismembered legs and wings and heads — it look like a scene from a horror film — and it’s just down the road from where I live.”

As atrocious as the conditions were, the activists said they are no worse than the standard factory farms run by large corporations. If anything, said Sawhney, the country’s largest industrial farms are worse, because the mass scale of slaughter and abuse, where all the abuse and killing are mechanized, makes it easier to remove human conscience from the equation.

Perpetrated by the egg and poultry industries, debeaking is to painfully cut off the tip of a bird’s beak, usually with a hot blade 💔🐔 pic.twitter.com/JLTR0lycXC 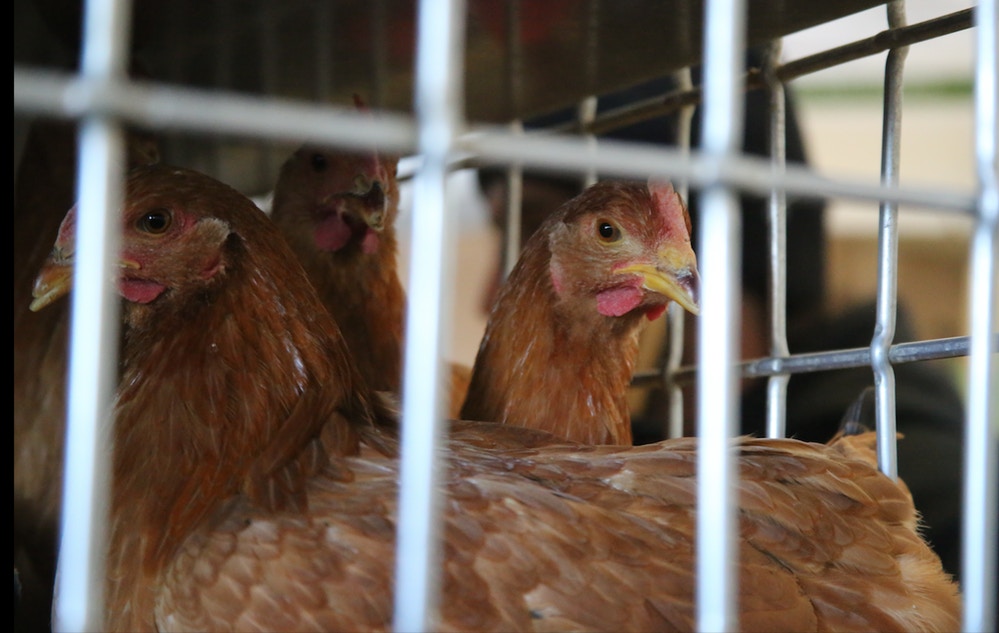 Though confronting such abuse was traumatic, Sawhney said that both the size of the protest, and the diversity of the participants, made it unique, foretelling a growing and more potent animal rights movement. “Just a few years ago, we would get 10, maybe 20, people participating in a risky DxE action like this. Now we have more than 200 people actively participating.”

Sawhney was part of a team composed exclusively of activists of color who rescued several distressed and abused animals from Saba. She described how her experience in post-9/11 America, as a Sikh-American from the Punjab region in India, led her to animal rights activism.

“It was very difficult for my family,” she said, recalling that she was often called a “terrorist.” During that era, “I wish someone did something, I wished that someone used their voice to say ‘this is wrong,’” Sawhney explained. “The reason I’m an animal rights activist, and the reason I speak up for animals today, is because of those moments when I felt really scared, when I felt attacked for not being like everyone else.” 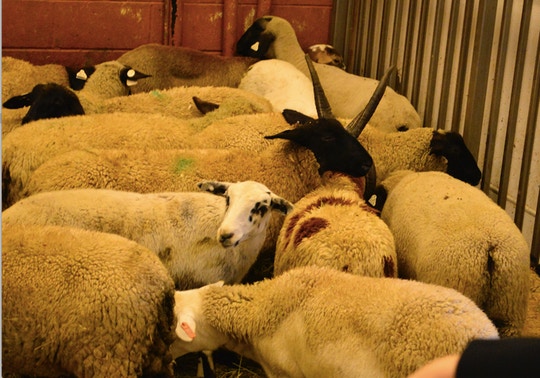 Masterson is a Lebanese-American who was raised in the Muslim faith. In an interview with The Intercept, he explained why the principles and values instilled in him by that faith, as well as his experiences as an Arab-American, led him to his devotion to animal rights: “A core tenet of Islam is to treat others compassionately. People generally have compassion toward animals, but our actions aren’t consistent with that.”

Worse, Masterson said, is this fundamental notion at the heart of animal abuse that “humans are superior to animals and therefore have the right to impose gratuitous suffering. What’s the basis for this claimed ‘right’?” He added:

I experienced a lot of racism growing up, which opened me up to other groups that went through same experiences — including other marginalized humans. But this also applies to animals. I realized they aren’t here for us, but rather are here with us — so it’s our moral right to take care of the downtrodden. That’s another big part of Islam: the mandate to do charity work and help the poor. This applies to animals as much as it does to humans.

All of the activists who spoke to The Intercept agreed that support for animal rights is growing rapidly around the U.S. “I think it will be one of the big causes of my generation,” the 23-year-old Masterson said.

Not only are protests far larger than even five years ago, but so is online interest in animal abuse, veganism, and consumer demands against the worst corporate abusers. Animal rights is clearly on the brink of becoming a fully mainstream cause.

The latest protest, aside from generating more visibility, seems likely to produce concrete and immediate reforms. Rather than responding with anger and recrimination, Saba’s owner agreed to sit down for a vegan lunch with one of DxE’s lead organizers, Wayne Hsiung (pictured below during his arrest last weekend), to discuss needed reforms. 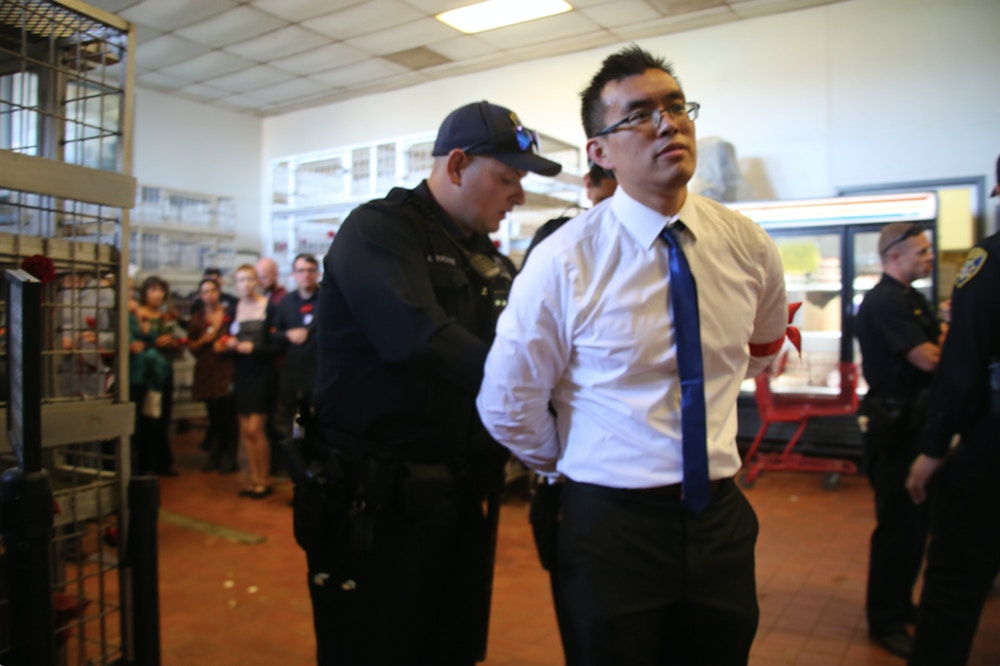 The Saba owner himself is an immigrant to the U.S. who works for the rights of refugees, has adopted three children since moving to the U.S., and, despite his ownership of a slaughterhouse, insists that he is committed to ending suffering, including for animals. Hsiung says his commitment to reforms, and particularly to instituting practices far superior to industrial farms, appears genuine: He has already ordered a sweeping cleanup of the slaughterhouse and has agreed to periodically allow inspections and to release animals to DxE.

In many ways, this latest protest and the impressive results it is producing are a poignant reflection of the trajectory of animal rights generally — from a fringe and widely mocked movement stereotyped as the exclusive domain of coddled left-wing activists into one that is now resonating with people of all types, who — as a matter of basic human conscience — are beginning to grasp and be horrified by the widespread, wholly unnecessary and inexcusable cruelty and suffering that animal agriculture is creating.