The Biggest Threat to World Peace Is NATO 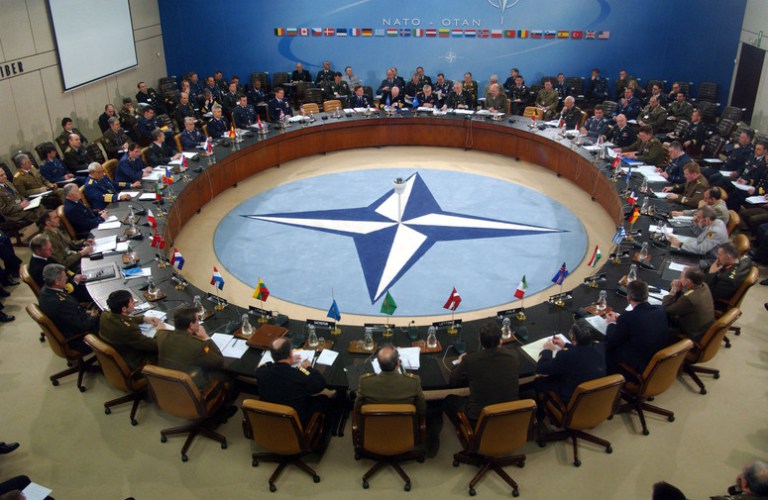 15 Nov 2017 – On November 8th, Britain’s Daily Mail bannered “NATO tells Europe to prepare for ‘rapid deployment’:” and sub-headed “Defence chiefs say roads, bridges and rail links must be improved in case tanks and heavy vehicles need to be quickly mobilised” (to invade Russia, but the newspaper’s slant was instead that this must be done purely defensively: “In October, NATO accused Russia of misleading them, saying that Moscow had deliberately violated international rules of military drills”).

During a press conference in Brussels, Stoltenberg said NATO needs a command structure to ensure ‘we have the right forces, in the right place, with the right equipment at the right time.’

He then added: ‘This is not only about commands. We also need to ensure that roads and bridges are strong enough to take our largest vehicles, and that rail networks are equipped for the rapid deployment of tanks and heavy equipment.

‘NATO has military requirements for civilian infrastructure and we need to update these to ensure that current military needs are taken into account.’

With that end of communism, and end of the communist military alliance, all of the constructive reason for NATO likewise ceased, and so NATO should have ended simultaneously when the Soviet Union and its military alliance did; but, instead, certain corporate interests in Western nations have prevailed; and, so, the Cold War is now ratcheting up even further on the U.S.-NATO side. This escalation, which is being done under false pretext (on the basis of lies), is forcing Russia to similarly increase its military budget and military exercises (such as the drills that are the pretext for NATO’s latest aggressive move here) — and Russia’s responses are being called by NATO ‘Russian aggression’, as if NATO hasn’t actually forced Russia to increase its military defenses (including those “drills”).

The need that the NATO-supplying corporations, such as Lockheed Martin and BAE, have — companies whose enormous profits depend heavily upon intensifying the Cold War instead of ending it (such as ought to have happened in 1991) — has become the mass-murdering and land-destroying corporate tail, which is actually wagging the governmental dogs, of Western nations’ (especially of America’s) foreign policies, so as to increase global expenditures into the mass-killing industries (most of which are U.S.-based), in order to keep their war-profits high. Wall Street is heavily involved in this, and most of America’s billionaires have these types of investments.

Economic theory considers all purchases and sales to constitute ‘economic growth’; and, so, expenditures and purchases for mass-killing and bombing, and for defenses against same, are considered just as much ‘economic growth’ as if those expenditures had gone into building things, instead of into destroying things — and neoliberals are therefore just as supportive of the military-industrial complex as are neoconservatives — neoliberals merely view the matter from the perspective of internal domestic policies (‘growth’), instead of from the perspective of external foreign policies (conquest). Both perspectives serve the aristocracy, the billionaires. This neoliberal-neoconservative consensus, in the West, keeps the profits going for the owners of all sorts of corporations — it’s “the Washington Consensus” that’s sold to vassal nations by promising that this path will allow them to join in the imperial nations’ ‘growth’. The leadership of the Soviet Union was sold a neoliberal bill of goods by the the Harvard economics department in around 1990, and the World Bank and Harvard’s people took the Russians for all they could, which was able to be done because Soviet President Mikhail Gorbachev was naive and accepted neoliberalism — he didn’t know about its neoconservative side, the aristocracy’s pursuit of conquest. He had rejected Marxist economics, and thought that the only alternative would be capitalist economics.

Back in 1991, when Gorbachev ended the Soviet Union and its military alliances, NATO had 16 member-nations. Later in the decade, in 1999, NATO under U.S. President Bill Clinton, started expanding — taking on as new members, nations that had previously been allied with Russia.

The Soviet Union had consisted of: Russia, Ukraine, Belarus, Uzbekistan, Kazakhstan, Georgia, Azerbaijan, Lithuania, Moldova, Latvia, Kyrgyzstan, Tajikistan, Armenia, Turkmenistan, and Estonia (the last of which was forcibly joined with it in 1940 so as to assist Russia’s fight against the Nazis). NATO has since absorbed, into its anti-Russia ranks: Lithuania (2004), Latvia (2004), and Estonia (2004), and is seeking the additional admissions of Ukraine, and of Moldova.

The Warsaw Pact, of Soviet-allied nations, had included: U.S.S.R., Albania, Bulgaria, Czechoslovakia, Eastern Germany, Hungary, Poland, and Romania. All of those except the Russian portion of the U.S.S.R. have since been absorbed into the anti-Russian military alliance, NATO. In the brainwashed U.S.-allied countries, this growth of the anti-Russia alliance isn’t considered “aggression,” even though it’s being done by NATO’s adding former Russia-allied nations, and though Russia’s former military alliance against NATO, the Warsaw Pact, ended in 1991. Aggression by “the West” is not acknowledged by “the West.” Even the U.S. group’s blatant aggressions that destroyed Russia-friendly nations such as Iraq, Libya and Syria aren’t. The fact that the U.S. is considered overwhelmingly throughout the world to be “the biggest threat to peace” is likewise ignored by the Empire’s ‘news’media.

Thus: 10 formerly Russia-allied nations have now been switched into the anti-Russia military alliance. And NATO accuses Russia of ‘aggression’. Nobody talks about how the U.S. would react if Russia had a military alliance which included both Mexico and Canada, and called upon them to strengthen their bridges so as to be able to carry today’s Russian battle-tanks. But, the people who are doing this, know very well what they are doing, and why, and to whom. They play dumb but they aren’t.

In addition, Yugoslavia was non-alligned, but now most of its parts have joined NATO: Slovenia, Croatia, and Montenegro. (Montenegro was brought into NATO on 5 June 2017, by U.S. President Donald Trump, who is being investigated by the rabidly anti-Russia U.S. Government, for allegedly being insufficiently hostile against Russia. His response to the accusations has been to try to out-do his domestic opponents’ hostility against Russia — to up their anti-Russia ante, instead of to wage political war against America’s military-industrial complex and its owners.)

And, the other parts of the former Yugoslavia continue to be courted. On November 15th, Radio Free Europe headlined “Serbia Hosts Joint Military Drills With U.S. As Bosnia Hosts NATO Delegation”. They reported: “NATO chief Jens Stoltenberg, speaking at a joint news conference with visiting Serbian President Aleksandar Vucic in Brussels on November 15, said ‘there is no doubt whatsoever that we absolutely respect the decision by Serbia to remain a military neutral country.’” Were Hitler’s troops being allowed to hold military exercises in neutral Switzerland? Of course not. Obviously, this isn’t any ‘military neutrality’. Instead, it’s those small countries trying to avoid becoming targets of U.S. missiles and bombs.

Most of the 13 new admittees to NATO after the 1991 end of the Cold War (on Russia’s side, but not on America’s), are located to the east of West Germany (closer to Russia than even East Germany was). In the negotiations to end the Cold War, the understanding that George Herbert Walker Bush’s people communicated to Mikhail Gorbachev’s people was that if the Cold War ends and East Germany becomes absorbed into West Germany to become again simply “Germany” and thenceforth a capitalist country (such as all did happen), then NATO would not move “one inch to the east.” That’s the basis upon which Gorbachev ended the Cold War. George Herbert Walker Bush lied — via his agents. Gorbachev was incredibly naive, and he didn’t specify that NATO would need to end if the Warsaw Pact would end. He believed in the goodwill, and honesty, of Bush and of his agents. He accepted merely the vague verbal promise that NATO would’t be expanded even “one inch to the east.” He didn’t know that he was dealing with people who were negotiating on behalf of, and who were following the instructions of, a super-scoundrel — U.S. President Bush. Bush’s dream, of encircling Russia with U.S. bombers, missiles. and tanks is now coming true. Would the U.S. tolerate Russia placing its invasion-forces on and near our borders, in Canada and in Mexico?

If this isn’t the time to end NATO, then when will be? And how much time to do it remains, before there is a WW III? Anyone who is supportive of the formation of a non-profit “End NATO Now” is hereby invited to indicate so, in a reader-comment to this article; and, if enough people indicate there that they would be willing to donate time or money to such an organization, then I shall establish it. Because: if we don’t end NATO now, then maybe NATO will end us all, surprisingly soon.