Trailblazing Astronomer Maria Mitchell on Science, Spirituality, and the Conquest of Truth

“We have a hunger of the mind which asks for knowledge of all around us, and the more we gain, the more is our desire.” 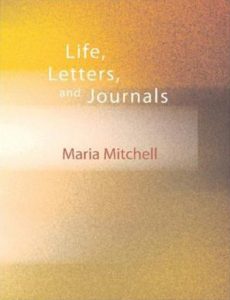 “The notion that science and spirituality are somehow mutually exclusive does a disservice to both,” Carl Sagan wrote shortly before his death. An entire century earlier, another patron saint of cosmic insight contemplated this enduring question with equal parts wisdom and warm wit — the pioneering astronomer and abolitionist Maria Mitchell (August 1, 1818–June 28, 1889), a mind amply ahead of her time, who paved the way for women in science and who examined the age-old tension between science and religion throughout the eternally rewarding Maria Mitchell: Life, Letters and Journals (public library | free ebook).

Mitchell’s landmark 1847 comet discovery earned her admission into the American Academy of Arts and Sciences — she was the first woman ever inducted, and it would be nearly a century until the second. She later became the first woman hired by the United States federal government for a “specialized nondomestic skill” in her capacity as “computer of Venus” — a one-woman GPS guiding sailors around the world.

As one of the world’s first true academic celebrities, Mitchell had a chance to do something only a handful of her contemporaries did — the girl who came of age on the tiny isolated island of Nantucket grew up to travel the world, visiting various institutions and observatories in England, Italy, and Russia, bringing with her an infinitely compassionate curiosity about the innumerable ways in which life is lived on our pale blue dot. 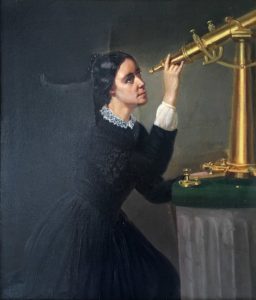 Although she was brought up in a Quaker home, Mitchell never joined any church and was consistently critical of religiosity — another hallmark of intellectual independence that defied her era’s climate. At her funeral, the president of Vassar College, where Mitchell had educated America’s first class of women astronomers and taught for many years, remarked that Professor Mitchell had devoted her life to the conquest of truth and never accepted any statement without studying its claims herself — an embodiment of Galileo’s tenets of critical thinking.

Upon visiting Rome during her European tour in 1858, Mitchell records a striking reflection on the age-old conflict between science and religion, approaching it, as she did everything, from a thoroughly original perspective rooted in the most elemental truths of existence:

This is the land of Galileo, and this is the city in which he was tried. I knew of no sadder picture in the history of science than that of the old man, Galileo, worn by a long life of scientific research, weak and feeble, trembling before that tribunal whose frown was torture, and declaring that to be false which he knew to be true. And I know of no picture in the history of religion more weakly pitiable than that of the Holy Church trembling before Galileo, and denouncing him because he found in the Book of Nature truths not stated in their own Book of God — forgetting that the Book of Nature is also a Book of God.

It seems to be difficult for any one to take in the idea that two truths cannot conflict.

In one of her frequent strokes of wry wisdom, Mitchell adds:

It is a very singular fact, but one which seems to show that even in science “the blood of the martyrs is the seed of the church,” that the spot where Galileo was tried is very near the site of the present observatory, to which the pope was very liberal.

And yet that very observatory, set in a church built in 1650, was bloodthirsty for martyrdom of a different sort: Mitchell was denied entry on account of her gender and had to seek special permission from the pope himself — a tragic testament to how humanity has long used the oppressive mythologies of religion to assault not only science but justice and basic human dignity as well. (A generation after Mitchell, Mark Twain would condemn how religion is used to justify injustice.) 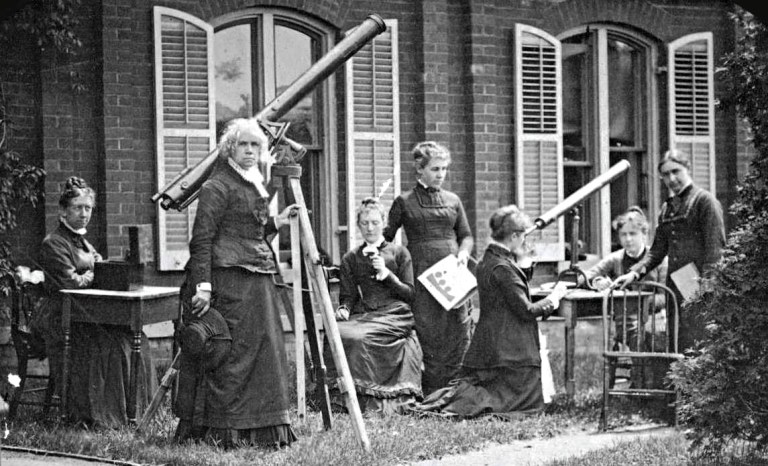 Maria Mitchell, at telescope, with her students at Vassar.

But Mitchell, ever the observer of nuance, is careful to note that religion, like any technology of thought, can be applied equally in ways that obstruct equality and ways that advance it. During her visit to Russia, she contemplates the local approach to religion as an equalizer of humanity:

I am never in a country where the Catholic or Greek church is dominant, but I see with admiration the zeal of its followers. I may pity their delusions, but I must admire their devotion. If you look around in one of our churches upon the congregation, five-sixths are women, and in some towns nineteen-twentieths; and if you form a judgment from that fact, you would suppose that religion was entirely a “woman’s right.” In a Catholic church or Greek church, the men are not only as numerous as the women, but they are as intense in their worship. Well-dressed men, with good heads, will prostrate themselves before the image of the Holy Virgin as many times, and as devoutly, as the beggar-woman.

Then there is the democracy of the church. There are no pews to be sold to the highest bidder — no “reserved seats;” the oneness and equality before God are always recognized. A Russian gentleman, as he prays, does not look around, and move away from the poor beggar next to him. At St. Peter’s the crowd stands or kneels — at St. Isaac’s they stand; and they stand literally on the same plane.

Most of all, Mitchell condemned the hypocrisies and pretensions of religion. She scoffs in her diary after attending a church service in December of 1866:

[The Reverend] chanted rather than read a hymn. He chanted a sermon. His description of the journey of Moses towards Canaan had some interesting points, but his manner was affected; he cried, or pretended to cry, at the pathetic points. I hope he really cried, for a weakness is better than an affectation of weakness. He said, “The unbeliever is already condemned.” It seems to me that if anything would make me an infidel, it would be the threats lavished against unbelief.

After another service, she finds herself appalled at the abyss between blind faith and fact:

The sermon was wholly without logic, and yet he said, near its close, that those who had followed him must be convinced that this was true. 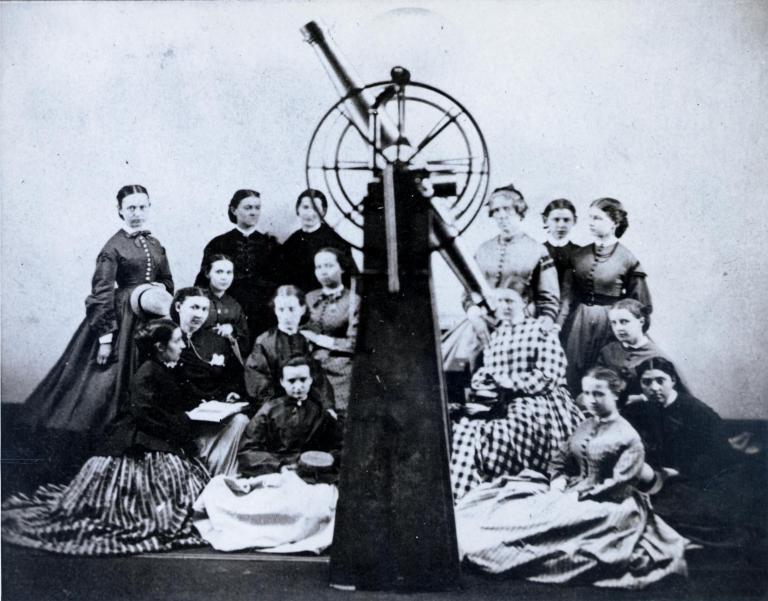 By the following year, Mitchell’s frustration with religion’s assault on critical thinking reaches a boiling point:

I am more and more disgusted with the preaching that I hear! … Why cannot a man act himself, be himself, and think for himself? It seems to me that naturalness alone is power; that a borrowed word is weaker than our own weakness, however small we may be. If I reach a girl’s heart or head, I know I must reach it through my own, and not from bigger hearts and heads than mine.

Unlike many, who tend to find religion’s escapist promises of immortality more and more alluring as they confront their own mortality, Mitchell grew only more insistent on truth over illusion as her lifetime unfolded. In her final years, she writes of attending a preacher’s sermon at the Universalist church, which of all religious denominations she found most tolerable:

[The Reverend] enumerated some of the dangers that threaten us: one was “The doctrines of scientists,” and he named Tyndale, Huxley, and Spencer. I was most surprised at his fear of these men. Can the study of truth do harm? Does not every true scientist seek only to know the truth? And in our deep ignorance of what is truth, shall we dread the search for it?

I hold the simple student of nature in holy reverence; and while there live sensualists, despots, and men who are wholly self-seeking, I cannot bear to have these sincere workers held up in the least degree to reproach. And let us have truth, even if the truth be the awful denial of the good God. We must face the light and not bury our heads in the earth. I am hopeful that scientific investigation, pushed on and on, will reveal new ways in which God works, and bring to us deeper revelations of the wholly unknown.

The physical and the spiritual seem to be, at present, separated by an impassable gulf; but at any moment that gulf may be overleaped — possibly a new revelation may come.

In another diary entry, she captures the greatest, plainest frontier of hope for such a reconciliation:

Every formula which expresses a law of nature is a hymn of praise to God. 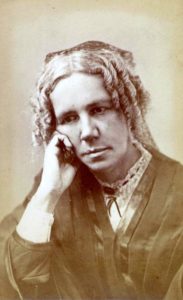 Nearly a century before Einstein contemplated what he famously termed the inherent human “passion for comprehension,” Mitchell considers our parallel thirst for truth and susceptibility to delusion:

We have a hunger of the mind which asks for knowledge of all around us, and the more we gain, the more is our desire; the more we see, the more are we capable of seeing.

Besides learning to see, there is another art to be learned, — not to see what is not.

Complement this particular portion of the endlessly insightful Maria Mitchell: Life, Letters and Journals with Aldous Huxley on science and spirituality, Primo Levi on the spiritual value of science, and Alan Lightman on secular transcendence, then revisit Mitchell on science and life, the art of knowing what to do with your life, and how to watch a solar eclipse.