We Are Entering an Enlightened Age That Sees All Animals as Individuals, Each with a Unique Personality

Mammals aren’t the only species with unique personalities. 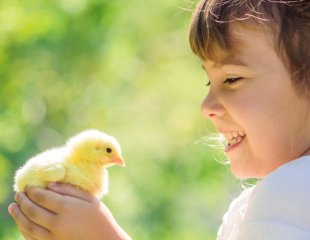 22 Nov 2017 – Feeling like I was being watched, I put down the dishes and turned away from the sink. Highlighted and backlit by the deck, a bird darkened the door. She took a step in. Wesley the chicken cooed inquisitively, cocking her head and turning broadside to me.

“You’re kidding me,” I thought.

Lipless and toothless, domestic chickens lack the ability to smile, but they do express themselves. They make soothing sounds, gentle clucks and coos like high, soft purrs. Wesley was a Plymouth Rock hen, barred black and white with a regal comb and wattles. She was a puff ball of a butterball and was standing between me and my outdoor deck.

“Shoo,” I said, and she strutted out slowly. “Down. Out.” I corralled her down the stairs and into the lush yard. Chickens should dig bugs from the yard, I thought, not beg scraps from the sink.

Wesley is different from the other chickens, but it can be difficult to describe the differences using concise and objective language. Humans aren’t even experts at reading and describing signals among our own species. If we were, there wouldn’t be such an overwhelming need for advice columns and couples therapy. We use our own experience to guess at others’ motivations and are ironically flabbergasted when we’ve mistaken our partner’s intentions. Now, it is my charge to explain the motivations of a chicken, and in the rest of the book it is going to get much harder as I try to understand the personalities of animals we humans think have even less in common with us.

On some days I consider Wesley to be a bold chicken. That is, she’ll come up onto my house’s deck and explore. The other chickens remain in the safety of familiar haunts at the other side of the yard, eyeing my vegetable garden. She seems to think ahead and to focus on the opportunity to find new morsels for herself. The deck and kitchen are new environments—completely uncontested and without competition from the other birds. Being there alone, she can claim the scraps of all things dropped during meals and cocktail parties. But is it a bold thing to do, to walk into the kitchen as I am finishing cleaning after a meal? I’d never harmed her before. Indeed, I am the obvious provider of food and water. Perhaps she isn’t so bold but rather curious and smart.

Then again, as she has seen that I am the one who has brought pellets and scraps to the coop so many times before, could it be possible that Wesley has other motivations? Could she, like my mother, communicate love through food? Could she be showing affection, strutting through the kitchen door clucking and cooing, only to have me, misreading the cues, shoo her away? I doubt it, but I will never truly know.

But her exact motivation isn’t the only point. It is also that behaviorally she is in such contrast to the others in the flock. Phyllis, an extravagantly coifed Polish chicken, is not so bright as Wesley. Phyllis is the shy one among the troop of backyard hens. When the others would retreat inside on cold winter nights, she’d often sit alone, outside, under the eaves of the coop, where icicles dripped drops upon her. It was difficult to determine whether or not freezing rain made it through the massive bubble of her head feathers, but it certainly did not look comfortable. She looked confused, but remained calm when I gently picked her up to put her in the coop. She wasn’t afraid. Was she dumb because she didn’t realize that in the summer her shaded perch was excellent, but could not fathom the contextual notion that in winter it was a dreadful spot? Was she bold because she calmly let me pick her up?

Words such as shy or bold or smart or dumb can fail us. In a different context, Phyllis is the most shy; when the other chickens, led by Wesley, boldly move forward into new hunting grounds, she moves so reluctantly. She is satisfied with the familiar pellets in the coop. She keeps to the same perch. She doesn’t appear to have the lust for adventure that Wesley has.

What are the right words to describe this behavior? I can only infer. Is one who does not seek adventure and the excitement of new things shy and weak or are there other, more appropriate interpretations? Could it be that Phyllis stays at home because she has achieved Zen? Does she live in the moment, completely content? Have I mislabeled her as the slow and dumb one, as if I were calling the Buddha a stodgy homebody?

And what about an expectation that only the animals most like us, mammals, are most likely to have personalities? If chickens can be unique, every one of them, many other species can be too.

The stories of individual animals and their personalities have been literally pecking at my door for years. They have been both joyful and intensely sad, which created a nagging conflict within me. I’ve fancied myself a scientist, and so in my scientific writings, I rejected overt study of animals as emotional and intelligent individuals.

There have been many reasons why I have not and could not have written on the subject of animal personality previously. If nothing else, I would not have wanted to appear soft in the rough and tumble world of scientific cliques. But why would the study of animal personalities cause consternation among the scientific elite? There are a few reasons, but the first is dogma. We scientists have a long history of resisting change in thought. The second, which is a result of the first, is a lack of scientific foundation. Things are changing, however, and researchers are entering a newly enlightened age where there is a creeping desire to peer into the individual lives of animals: to understand them as intelligent and emotional beings and to study the evolutionary reasons for being the individuals they are. 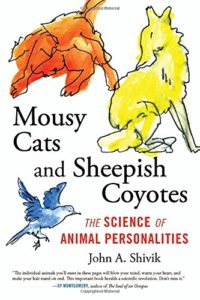 John Shivik has served as a federal researcher, state predator biologist, federal regional wildlife program manager, and search-and-rescue dog handler. He has published widely in scientific and popular media, and is the author of The Predator Paradox: Ending the War with Wolves, Bears, Cougars, and Coyotes.

Excerpted from Mousy Cats and Sheepish Coyotes: The Science of Animal Perspectives by John A. Shivik (Beacon Press, 2017). Reprinted with permission from Beacon Press.