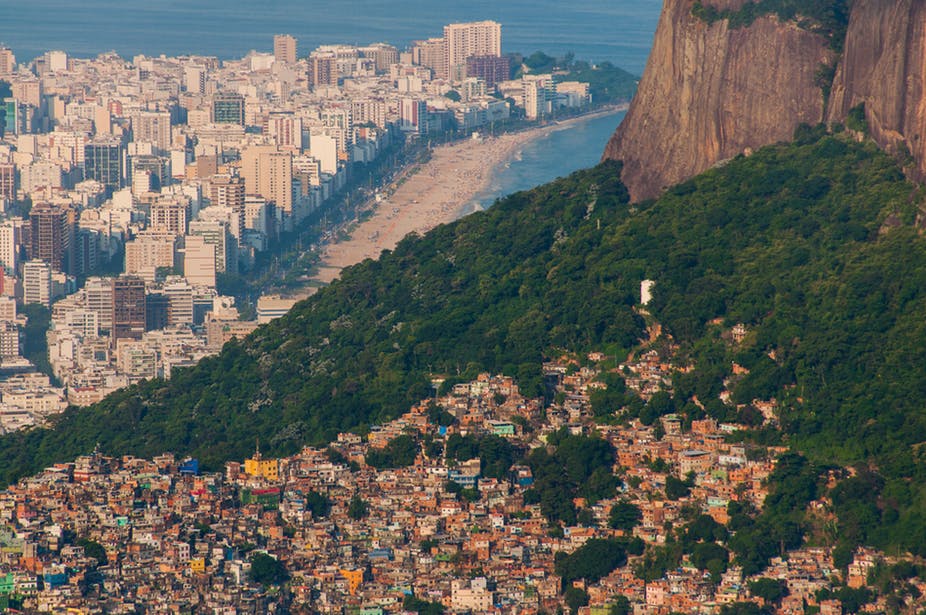 The gap between rich and poor is growing. shutterstock.com

14 Dec 2017 – Inequality is rising almost everywhere across the world – that’s the clear finding of the first ever World Inequality Report. In particular, it has grown fastest in Russia, India and China – places where this was long suspected but there was little accurate data to paint a reliable picture.

Until now, it was actually very difficult to compare inequality in different regions of the world because of sparse or inconsistent data, which lacked credibility. But, attempting to overcome this gap, the new World Inequality Report is built on data collection work carried out by more than a hundred researchers located across every continent and contributing to the World Wealth and Income Database.

Europe is the least unequal region of the world, having experienced a milder increase in inequality. At the bottom half of the table are Sub-Saharan Africa, Brazil and India, with the Middle East as the most unequal region. 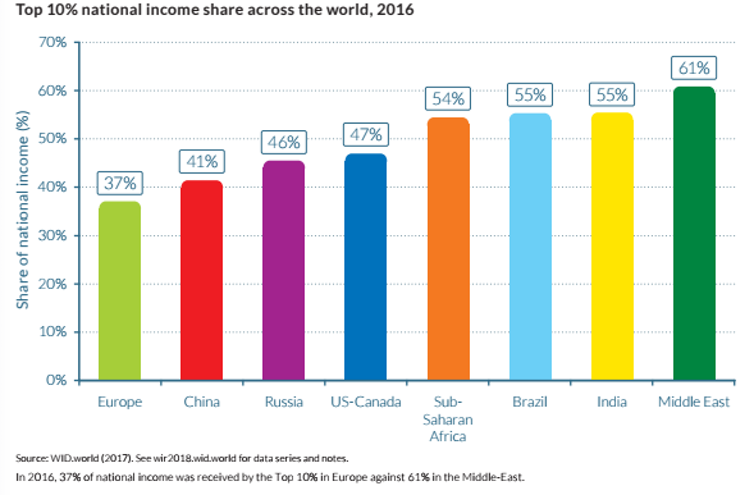 Since 1980, the report shows that there has been rising inequality occurring at different speeds in most parts of the world. This is measured by the top 10% share of income distribution – how much of the nation’s income the top 10% of earners hold.

Places where inequality has remained stable are those where it was already at very high levels. In line with this trend, we observe that the Middle East is perhaps the most unequal region, where the top 10% of income earners have consistently captured over 60% of the nation’s income.

Inequality is always a concern

Even in Europe, where it is less pronounced, equality always raises ethical concerns. For example, in Western Europe, many do not receive a real living wage, despite working hard, often in full-time employment. Plus, the data shows that the top 10% of earners in Europe as a whole still hold 37% of the total national income in 2016.

Rising income inequality should be focal to public debate because it is also a factor which motivates human behaviour. It affects how we consume, save and invest. For many, it determines whether one can access the credit market or a good school for our children

This, in turn, may affect economic growth, raising the question of whether it is economically efficient to have unequal societies.

Going into the details of what drives the rise in income inequality, the report shows that unequal ownership of national wealth is an important force. National wealth can be either publicly owned (for example, the value of schools, hospitals and public infrastructure) or privately owned (the value of private assets).

Since 1980, very large transfers of public to private wealth occurred in nearly all countries, whether rich or emerging. While national wealth has substantially increased, public wealth is now negative or close to zero in rich countries. In particular, the UK and the US are countries with the lowest levels of public capital. 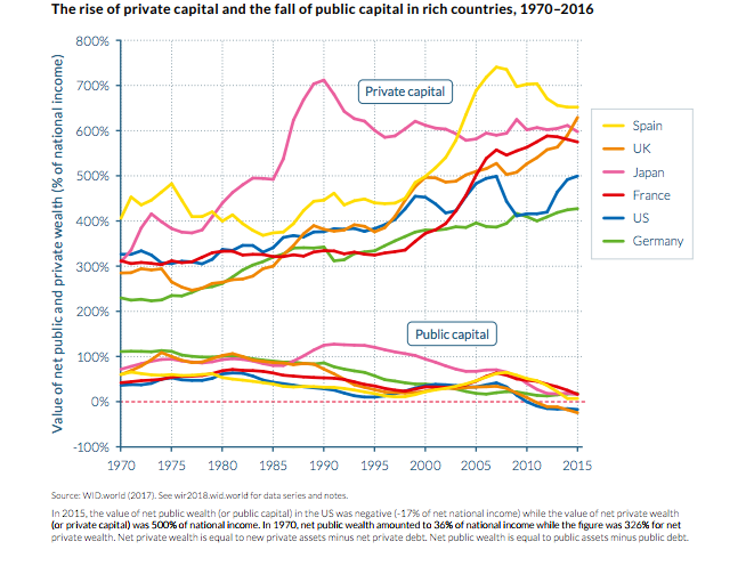 Arguably, this limits the ability of governments to tackle inequality. Certainly, it has important implications for wealth inequality among citizens. It also indicates that national policies shaping ownership of capital have been a major factor contributing to the rise of inequality since 1980.

Inequality in the developing world

Resource rich economies are traditionally considered to be prone to conflict or more authoritarian in terms of how they are governed. What this new report tells us is that some resource rich economies, such as “oil economies”, are also extremely unequal. This was often suspected because natural resources are often concentrated in the hands of a minority. Until this report, however, there was no clear evidence.

The World Inequality Report appears to show us that the Middle East region may be even more unequal than Central and South America, which have long been held up as some of the most unequal places on Earth.

Another significant finding is that countries at similar stages of development have seen different patterns of rising inequality. This suggests that national policies and institutions can make the difference. The trajectories of three major emerging economies are illustrative. Russia has an abrupt increase, China a moderate pace and India a gradual one. 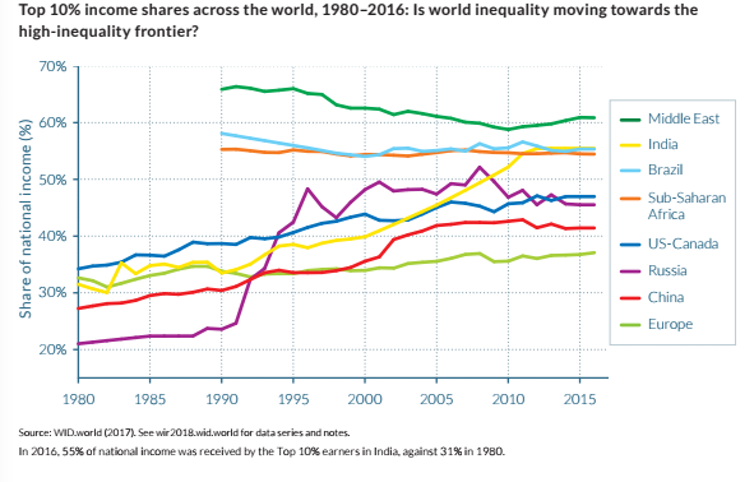 The comparison between Europe and the US provides an even more striking example – Western Europe remains the place with the lowest concentration of national income among the top 10% of earners.

Compared with the US, the divergence in inequality has been spectacular. While the top 1% income share was close to 10% in both regions in 1980, it rose only slightly to 12% in 2016 in Western Europe, while it shot up to 20% in the US. This might help explain the rise in populism. Those left behind grow impatient when they do not see any tangible improvement (or even a worsening) in their living conditions.

It is not just important to reduce inequality to make society more fair. Equal societies are associated with other important outcomes. As well as political and social stability, education, crime and financial stability may all suffer when inequality is high.

With this new data at our fingertips, we can now act to learn from the policies of more equal regions and implement them to reduce inequality across the world.