In 2017, the World Let another ‘Genocide’ Unfold 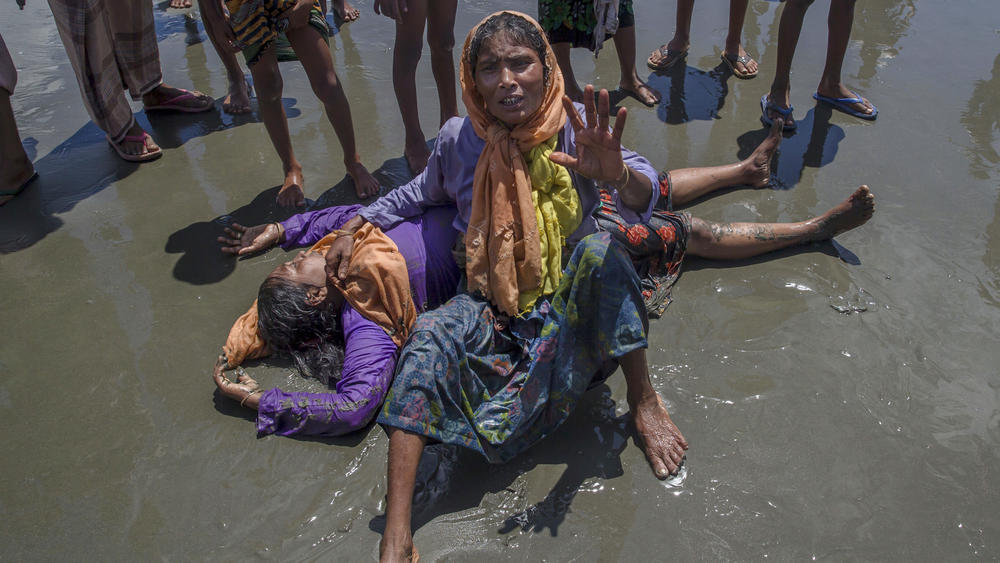 A Rohingya Muslim woman shouts for help as a relative lies unconscious after the boat they were traveling in capsized minutes before reaching shore at Shah Porir Dwip, Bangladesh, on Sept. 14, 2017.

18 Dec 2017 – The volume of utterly horrifying stories emerging from Myanmar can feel overwhelming. Since late August, more than 626,000 ethnic Rohingya have fled what seemed to be a systematic campaign of attacks by the Burmese military and local militias in the country’s Rakhine state — the most rapid exodus of a community since the Rwandan genocide. An aid group estimated that some 9,000 Rohingya, including 1,000 small children, died between late August and late September. Satellite data showed hundreds of villages burned to the ground, while virtually everyone who escaped to squalid refugee camps in Bangladesh has a horror story to tell. 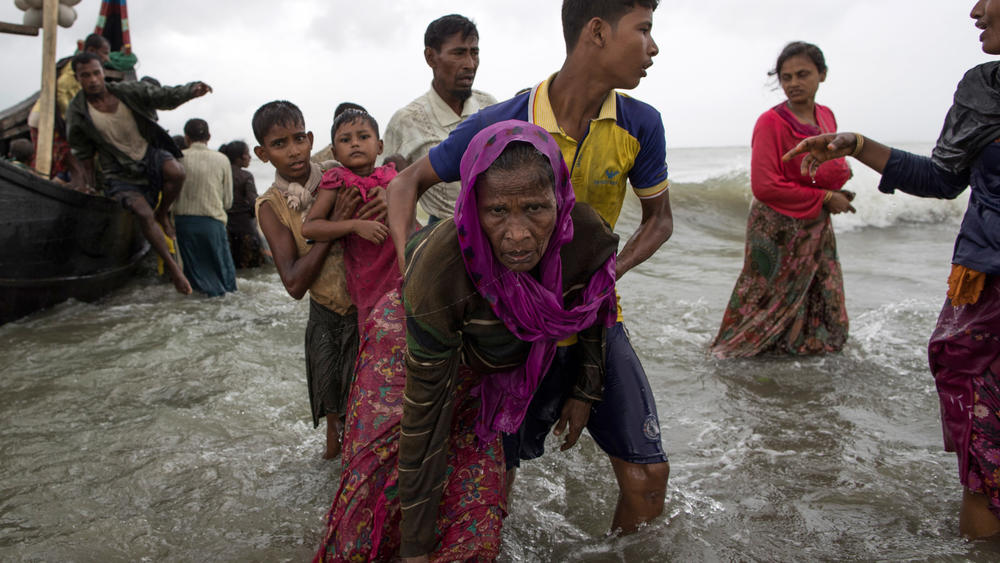 A young Rohingya man helps an elderly woman after the wooden boat they were traveling on crashed into the shore and tipped everyone out in Dakhinpara, Bangladesh, on Sept. 12, 2017.

“They shot my old father, they put a log of wood in his mouth and then slit his throat,” a woman named Almas Khatun recently told The Sydney Morning Herald. “I keep thinking about my children. I couldn’t save them. They killed seven of my children, my husband and his two brothers.” She pretended to be dead and managed to later crawl to safety, away from the burning ruin of her village and the corpses of dozens of slain relatives.

Last week, an investigation by The Associated Press chronicled what appears to have been a campaign of mass rape carried out by Burmese security forces, based on interviews with 29 women and girls ranging from the ages of 13 to 35. Soldiers and anti-Rohingya vigilantes, they say, engaged in robbery and torture, including abusing and gang-raping the women they captured. “The testimonies bolster the U.N.’s contention that Myanmar’s armed forces are systematically employing rape as a ‘calculated tool of terror’ aimed at exterminating the Rohingya people,” the AP wrote.

In a Friday column, Nicholas Kristof of The New York Times recounted his own conversations with Rohingya women who were raped and had to witness the slaughter of their loved ones. He called on Aung San Suu Kyi, Myanmar’s top civilian leader and Nobel laureate, to listen to the story of Hasina Begum, a 21-year-old who saw the men and boys of her village killed, their bodies dumped in a pile, doused in gasoline and set aflame. The women and girls were meant to endure an even grislier fate.

“I was trying to hide my baby under my scarf, but they saw her leg,” Hasina told Kristof. “They grabbed my baby by the leg and threw her onto the fire.” The story goes on: “Hasina said she collapsed on the ground, screaming. The impatient soldiers then began to club her — she showed me scars from the beating — and dragged her into a hut with her sister-in-law, Asma Begum. The soldiers stripped the women naked and raped them, she said, and finally closed the door and set the hut on fire.” 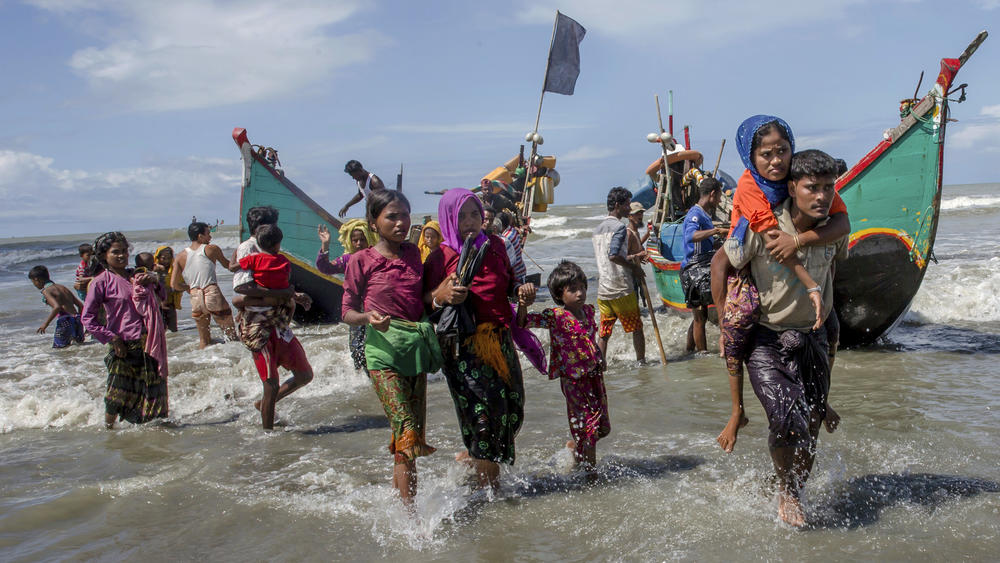 Rohingya Muslims walk to the shore after arriving on a boat from Myanmar in Shah Porir Dwip, Bangladesh, on Sept. 14, 2017.

Naked, the two women managed to escape through a hole in the hut, salved their injuries with mud, scavenged clothes and made a three-day trek to the Bangladesh border. “When I fall asleep, I look for my baby,” Hasina told Kristof. “I wake up screaming.”

The violence that prompted these shocking stories has generated plenty of international outrage. The U.S. Holocaust Memorial Museum, which warned two years ago that conditions in Myanmar, also called Burma, were ripe for genocide, issued a report in November alongside a local rights group saying there was “mounting evidence” that the Burmese military carried out acts that “represent a genocide of the Rohingya people.”

Secretary of State Rex Tillerson described what befell the Rohingya as “ethnic cleansing,” while various senior U.N. officials have also made similar statements. Yet there has been little genuine action, and not just from the United States.

Muslim leaders from Turkey to Malaysia grandstanded for a time about the tragedy befalling their fellow Muslims, but most have moved on. In India, which does have influence over Myanmar, sympathy for the Rohingya played second fiddle to domestic politics, with the country’s Hindu-nationalist government moving to deport thousands of Rohingya refugees in the country over concerns about Islamist extremism. And China, which has a close relationship with Myanmar’s generals and deep economic interests in the country, has proposed a repatriation plan that would likely shield Myanmar’s top brass from further international scrutiny. 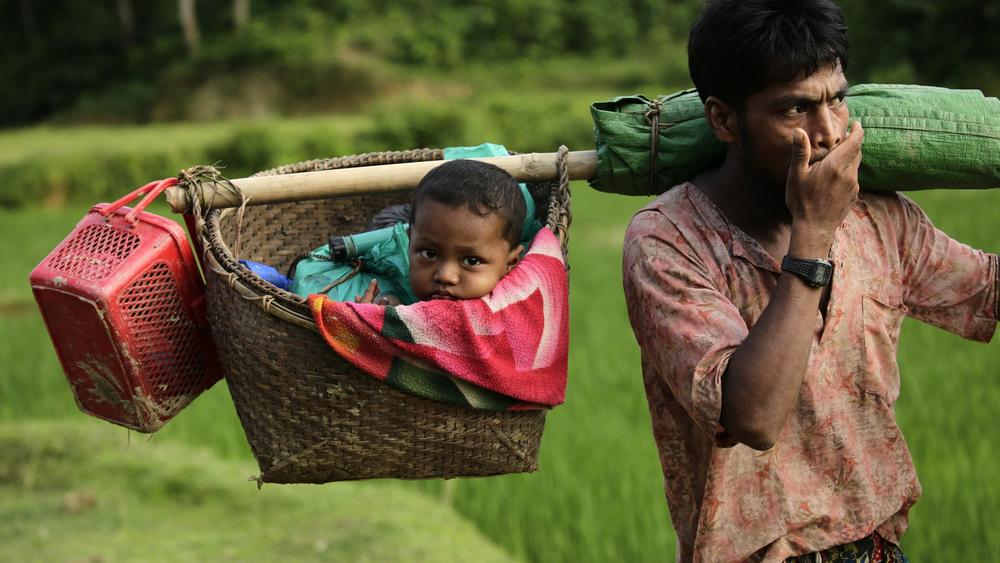 A Rohingya man carries his baby in a basket as he arrives in Tuangiri, Teknaf, Bangladesh, on Sept. 12, 2017.

“The Rohingya are a lesser consideration for Beijing,” noted Nicholas Bequelin of Amnesty International in The New York Times. “The returnees would not be allowed to go to their home villages, which have been reduced to ashes, but consigned to grim internment camps. The system of discrimination and segregation that made them so vulnerable in the first place would become further entrenched.”

The Burmese government certainly seems unmoved. Suu Kyi maintains that Rohingya testimony isn’t to be believed on face value and blames local “terrorists” among the Rohingya for provoking the chaos. Her defenders argue that she has to play her own complicated game with the country’s overweening military, but her maneuvering still obscures the calamity in Rakhine, which remains almost entirely closed off to independent media.

When journalists recently asked a Rakhine official, Col. Phone Tint, about reports of rape, he scoffed. “These women were claiming they were raped, but look at their appearances — do you think they are that attractive to be raped?” he said. 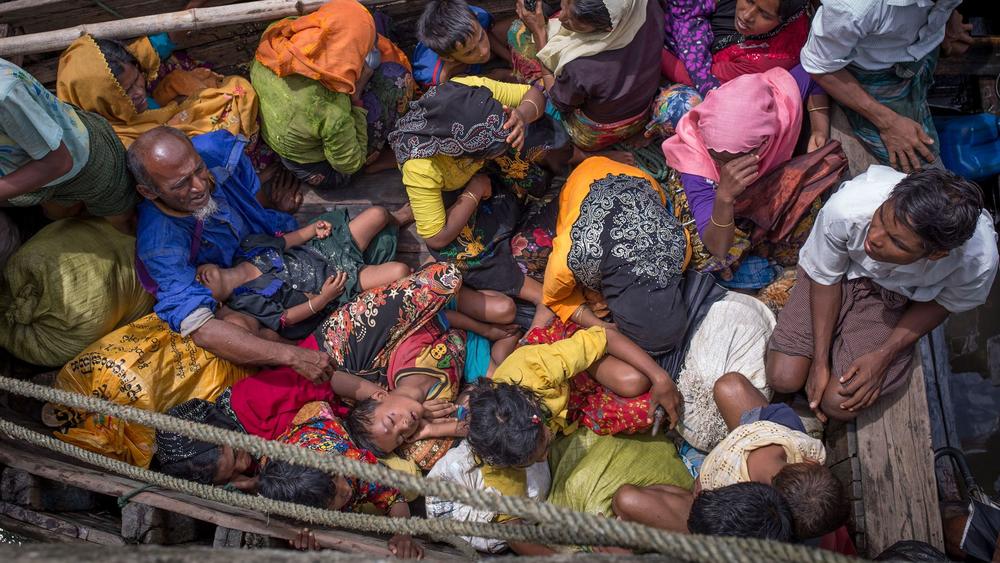 Rohingya refugees arriving by boat at Shah Parir Dwip on the Bangladesh side of the Naf River on Sept. 12, 2017.

Another senior official from Rakhine, speaking to Hannah Beech of The New York Times, articulated the Burmese government’s refusal to even believe in the existence of the Rohingya, a largely Muslim ethnic group that has lived for generations in Myanmar but had its citizenship rights stripped in the 1980s by a military junta. “There is no such thing as Rohingya,” he said before parroting President Donald Trump. “It is fake news.”

That use of the term “fake news” generated a fair bit of controversy, underscoring both Trump’s broader appeal to strongmen abroad and his own muted response to the Rohingya crisis. Yet, in this instance, Trump is hardly alone in his indifference.

“Crimes against humanity are an offense against all humanity and require a response from all of us,” wrote Kristof. But in a year so profoundly steeped in bad blood, that common response is nowhere in sight. 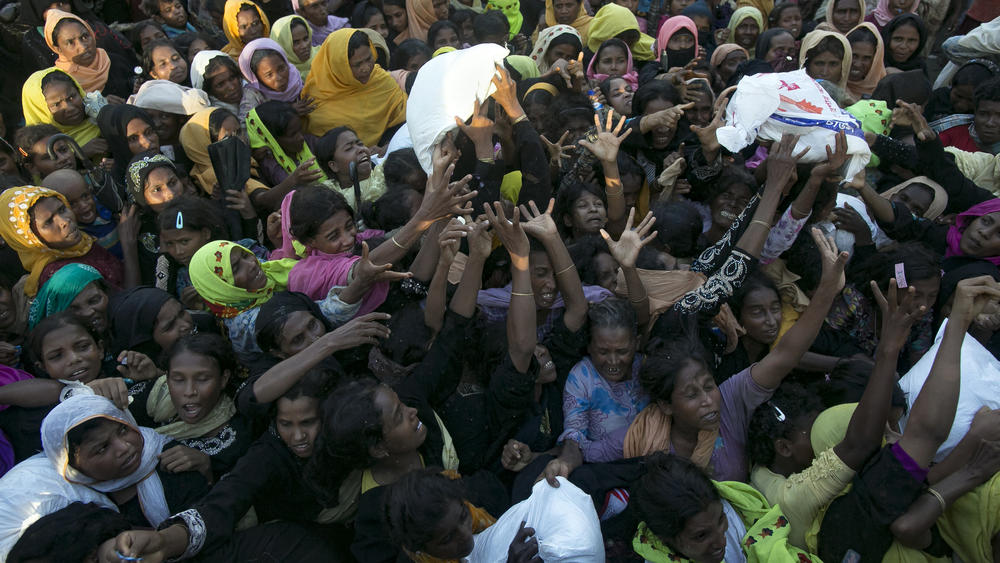 Ishaan Tharoor writes about foreign affairs for the Post.