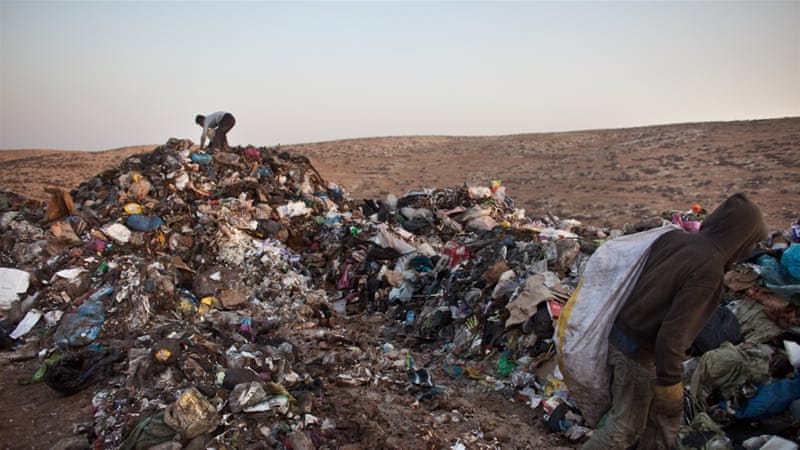 ‘While Israel increases the amount of waste it creates, it diverts the risks and pollutants onto the Palestinian environment and land.’ [File: Getty Images]

According to the report, released today, Israel has established at least 15 waste treatment facilities in the West Bank to recycle waste largely produced inside Israel.

The report details five Israeli facilities in the West Bank treating waste from Israel, four of which handle hazardous waste, including biological and medical waste, solvent waste from the pharmaceutical and chemical industries, oil waste and electronic and metal waste.

“Israel has turned the West Bank into a garbage dump,” Adam Aloni, a B’Tselem researcher and author of the report, told reporters at a news conference.

Israel produces some 350,000 metric tonnes of hazardous waste each year, according to B’Tselem.

Israel found what it needed in the occupied West Bank and has been “abusing its status as an occupying power” in a territory where Palestinians have no rights to oppose Israeli policies that directly affect them, B’Tselem said.

“While Israel increases the amount of waste it creates, it diverts the risks and pollutants onto the Palestinian environment and land,” Aloni said.

In the West Bank, which has been ruled by Israeli military law since 1967, Israel can loosen its environmental policies to allow waste facilities to operate more cheaply.

“Since these plants are exempt from recording or reporting their external impact, no information is collected at all regarding the type and quantity of pollutants, how they are treated, the destination of wastewater pumping, or the quantity and destination of hazardous by-products,” the report stated.

“Israel uses the territory as if it was their own. It’s de facto annexation,” Aloni told Al Jazeera, noting that Palestinian development has simultaneously been “paralysed” by the Israeli occupation.

Karem Jubaren, the head of field research at B’Tselem, told Al Jazeera that nearby Palestinian communities have not been told what kind of waste is being treated in these industrial zones.

Palestinians residing near the industrial zones have complained of a perpetual bad smell and respiratory illnesses, Jubaren said, although he acknowledged that further research was needed to directly connect these issues with Israel’s waste treatment plants.

A resident of one of these communities told Al Jazeera that he was “too scared to talk” about the alleged effects.

Israel’s diversion of the environmental and health risks of treating its own hazardous waste to Palestinian communities “is part and parcel of the policy of dispossession and annexation it has practiced in the West Bank for the past fifty years,” the report stated.

“Israel is exploiting the West Bank for its own benefit, ignoring the needs of the Palestinians almost entirely, and harming both them and their environment.”