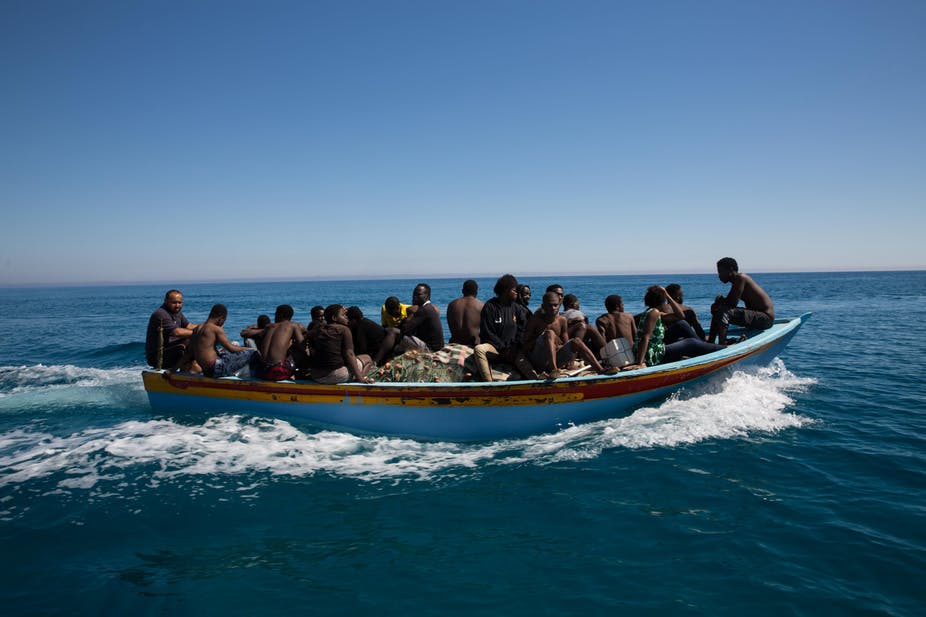 The Libyan coastguard has received money from the EU to stop migrant boats crossing the Mediterranean. EPA

5 Dec 2017 – A man called out numbers against the murky darkness of the Libyan night: “400, 500, 600, 650.” These were bids in Libyan dinars during a slave auction. Video footage of these scenes, aired in mid-November by CNN, thrust concerns about the conditions facing migrants at Europe’s borders back into the spotlight.

In response, the EU called for “swift action”, and the French president, Emmanuel Macron, announced a plan to launch “concrete military action” against the perpetrators. The Nigerian government also said it had begun to bring home some of its citizens stranded in Libya.

Efforts to enable people to escape from situations of slavery, violence and exploitation in Libya are certainly welcome. But they will need to go beyond the short-term perspective that so often accompanies responses to proclamations of crisis. And these new efforts will reek of hypocrisy if they do not also recognise the relationship between existing migration control policies and the vulnerability of migrants using routes into and through Libya.

The story of young men sold as slaves in Libya was the focus of debates at the UN Security Council and topped the agenda at a major summit of European and African leaders. Slavery and other abuses are an “abomination” that “can no longer be ignored”, stated Filippo Grandi, the UN’s high commissioner for refugees.

But stories of forced labour, exploitation and the buying and selling of migrants are not particularly new. I heard them myself in 2015 when I was part of a research team which carried out interviews with nearly 200 people who had departed from Libya by boat, towards Italy and Malta.

I was arrested and imprisoned in southern Libya … I was sold to a slave trader, along with other Eritreans, Somalis and Nigerians. This person took us to a farm, where we could not leave except to go to work at a construction site and return. We were always guarded by armed people.

These words, from a young Malian man, were mirrored by many others who spoke of being held captive, put into forced work or bought and sold. Some were set free once they had gathered enough ransom money, wired over to them by family and friends. Others might be released when their labour was no longer required or if they managed, somehow, to escape. But it was also not unusual to hear people being beaten and even see others die at the hands of their “owners”.

Our project has not been the only one to report such findings. In 2016, the International Organisation for Migration (IOM) found that 71% of migrants who crossed the central Mediterranean route from North Africa to Europe had experienced exploitation, particularly kidnapping, forced labour, carrying out work without being paid and being kept at locations against their will. In February 2017, a Sky documentary described Libya as “hell” for migrants and a study of trafficking and smuggling there referred to “the extortion economy and new slave trade”.

Public figures are right to condemn people being sold as slaves in Libya. But their concern has an air of insincerity when they have known about it for years. The EU’s high representative for foreign affairs, Federica Mogherini, expressed her “total condemnation of these despicable acts” but also stated that “this is not something that began one month ago. Everybody has known about it for years”.

For officials to say now that violence, exploitation and slavery can “no longer be ignored” belies the fact that these issues were downplayed and pushed aside as the EU pursued collaboration with the Libyan authorities to control migration.

The primary objective of European approaches has instead been to stem the flow of people departing Libya by boat. Since the declaration of a migrant crisis back in 2015, the EU has given increasing amounts of funding and training to the Libyan coastguard and to detention centres to keep migrants on Libyan soil.

In the summer of 2017, an emboldened Libyan coastguard then made threats of violence to international non-governmental organisations (NGOs) engaged in search and rescue missions at sea. Soon after, an armed militia west of Tripoli with backing from the Libyan authorities – who are themselves supported by Italian and EU authorities – stepped in to intercept boats and prevent people leaving towards Italy.

These policies to stop boats arriving on European shores have had significant implications for the conditions of migrants in Libya. Many of the people we interviewed told us that they saw boats to Europe as the only way to flee. Now, once they are pushed back to Libya, they are held in detention centres, many of which have been criticised by international observers as overcrowded, unsanitary places where migrants are exploited.

Research reports point to “abundant evidence” which shows that “detention facilities in Libya are the site of sustained criminal activity, as recruitment grounds for smuggling activity but also processing centres for ransom extraction and slavery.” Another report by the NGO Refugees International noted how often “in Libya the policeman is a smuggler, and the smuggler is a policeman”. Despite this, just a few months ago Macron claimed that Libya could be an appropriate place to process asylum requests.

The containment of migrants in Libya is therefore likely to be reinforcing the very situation that Europe’s leaders appear to be so angry about now. Médecins Sans Frontières described it as “feeding the business of suffering”. 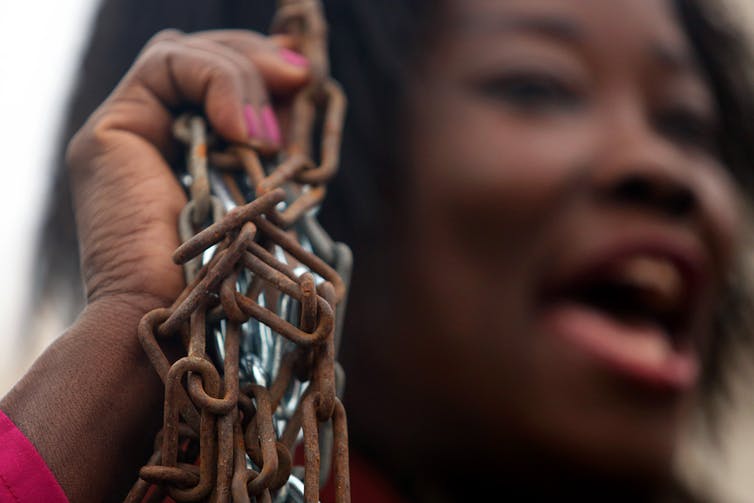 Athens: a migrant protests on December 2 against reports of slave auctions held in Libya. Orestis Panagiotou/EPA

Moving beyond a crisis

European approaches to migration across the Mediterranean have repeatedly been shaped by urgent attempts to address sudden crises. But the situation in Libya cannot easily be addressed by such a short-term response. People smuggling has been a thriving economic sector for years. The profits from smuggling, exploitation and now slavery provide important funds for different groups around the country. One report describes migrants as “simply another commodity to be exploited” by the various armed groups vying to control parts of Libyan territory.

An important contribution to finding a longer term solution could come from a newly announced “transit and departure facility” in Tripoli providing opportunities for people to escape from Libya. They would be resettled elsewhere, transferred to UNHCR facilities in other countries or returned to their country of origin. But so far there are only 10,500 places available – far below the number of places required – and this is little more than the nearly 9,000 returns already carried out by the IOM in 2017.

After a decade of repeatedly declaring migrant crises and emergencies at their borders, it is time the EU took a broader, longer-term approach. This has to recognise the structural relationship between policies of border control, dynamics of migration and patterns of migrant vulnerability and exploitation. Intensifying border controls without addressing the reasons why people move or providing alternatives is likely to reinforce the dangers that they face.