The Crumbling Edifice of Hypermilitarised Power

6 Nov 2017 – It’s hard to say what adjective best describes the tenour of First Committee this year, but it might be rancour. The rights of reply were more voluminous, loud, and increasingly likely to descend into the absurd than ever before. The rhetoric against disarmament—the objective of this Committee and one of the primary principles of the United Nations—was more acute than ever, especially in the nuclear field. The animosity between certain states felt like it had reached a tipping point. Yet the bitter vitriol thrown about by some was tempered by the understanding of the majority that progress has been made in disarmament, precisely by forging ahead without the most quarrelsome states.

Some of the bitterness of certain delegations at First Committee may be thought to have been derived from this progress—in particular, the negotiation of the Treaty on the Prohibition of Nuclear Weapons (TPNW). But as the International Campaign to Abolish Nuclear Weapons said in its statement to the Committee on 10 October, “It is not the ban that divides us; nuclear weapons divide us.”

It is disarmament that can bring us together. By reducing available means of violence. By eliminating a source of inequality between and within states. By freeing up resources for other endeavours.

Yet “divisiveness” is the main argument used by those standing against disarmament. Their argument is based on the premise that eliminating certain weapons is polarising and unsafe. But how can anything that reduces means of massive violence divide us? How can it make us more unsafe?

The Orwellian logic of the nuclear-armed states, and of those that continue to profit from selling conventional arms to states that use them to commit abuses of human rights and international humanitarian law, is that violence is stability. In the world they have sought to create, the means to destroy each other is what will keep us together. In this world, those who work for peace, development, and security through the reduction and control of weapons are making the world more unstable and rife with tension.

This absurd logic has held its grip on the international imagination for far too long. But the edifice is crumbling. The development of the TPNW took down big pieces of the arguments in favour of nuclear weapons. The Sustainable Development Goals and the Women, Peace and Security agenda, even without saying much about weapons, pose an acute challenge to current levels of military spending and approaches to “peace and security” and “sustainable development”.

We can keep chipping away at the false logic of peace through violence. We should do so together, in the ways that have already led to much success. We should not let the embittered few, cantankerous from watching their control slip away, prevent us from forging ahead to build a better world for all.

The levels of hypermilitarised, hypermasculinised violence we see in the world must not deter us from pursuing an alternative path. On the contrary, it’s our only option. Those who hold onto power through fear and intimidation will try to cling to the tools they perceive as granting them privilege in a complex world; the rest of us must find away through the cynicism that fosters to try something different. 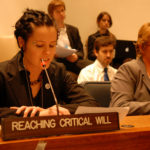 Ray Acheson is the Director of Reaching Critical Will. She provides analysis, research, and advocacy across a range of disarmament and arms control issues. Ray leads WILPF’s work on stigmatising war and violence, including by campaigning for a nuclear weapon ban treaty and challenging the arms trade and the use of explosive weapons and armed drones. Ray is also on the Board of Directors of the Los Alamos Study Group and represents WILPF on several coalition steering groups, including the International Campaign to Abolish Nuclear Weapons (ICAN). She has an Honours BA in Peace and Conflict Studies from the University of Toronto and an MA in Politics from The New School for Social Research. Ray previously worked for the Institute for Defense and Disarmament Studies.

Reaching Critical Will (RCW) is the disarmament programme of the Women’s International League for Peace and Freedom (WILPF), the oldest women’s peace organisation in the world. In 1915, women from countries at war with each other and from neutral countries came together in The Hague to discuss solutions to the causes and violence of World War I. They founded WILPF as an organisation with a mandate to challenge militarism, patriarchy, and capitalism as the roots of war and violence. WILPF created RCW in 1999 to lead the organisation’s analysis and advocacy for disarmament, the reduction of global military spending and militarism, and the investigation of gendered aspects of the impact of weapons and of disarmament processes. We seek to achieve disarmament, challenge militarism, and confront violent masculinities and gender discrimination through research, policy analysis, advocacy, monitoring, and reporting on international forums such as the United Nations and other meetings of governments and organisations, and through international civil society networks and campaigns.