The Rohingya Tragedy Shows Human Solidarity Is a Lie 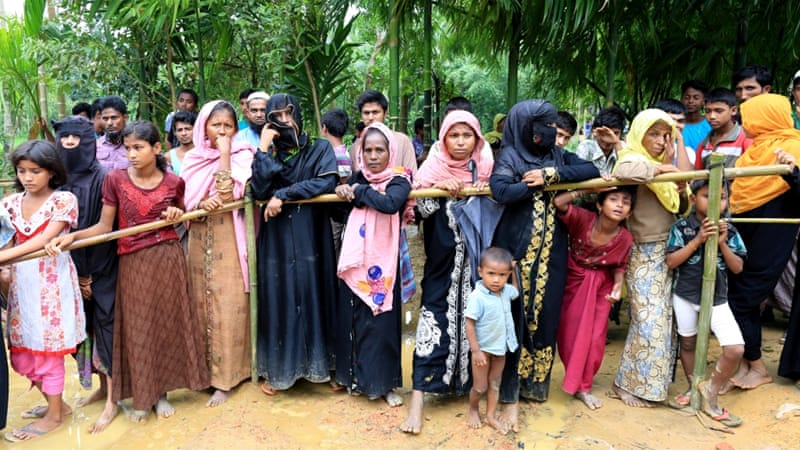 The Rohingya tragedy has shown how a UN member State can have an internal policy built on racial and religious discrimination, writes Karman. [Showkat Shafi/Al Jazeera]

1 Dec 2017 – Nobody argues any more about what is happening in Myanmar. The United Nations, international human rights organisations and world capitals all agree that the war being waged on the Rohingya Muslims is a clear example of ethnic cleansing and genocide.

According to international reports, the number of people who have fled Myanmar military operations in Rakhine state have reached approximately 600,000 refugees by October.

The crisis continues to get worse, fanned on one hand, by the Myanmar government’s intolerance and insistence on continuing their racist exclusionary policies, and on the other hand, by the fact that the world’s interest in what is happening in Myanmar is just not deep enough.

The most dangerous thing the Rohingya tragedy has uncovered is that the idea of “human solidarity” may be nothing more than a big lie.

Those who call and fight for freedoms and human rights regardless of race or religion or colour or ideology – and I am one of those – are facing a huge conundrum. Why is this happening? Why is this human holocaust, happening right before our eyes, not being stopped? Are there unknown conditions that must be met in order to show human solidarity and offer the support needed to end a particular people’s suffering?

These are questions whose answers, I fear, will be terrifying. Is human solidarity something afforded only to the strong and rich who have political or economic power in the international arena?

The Rohingya tragedy has confirmed what we’ve said about the use of ‘terrorism’ by dictatorships as a useful excuse to realise political goals and destroy opposition or political opponents.

Many are starting to understand that human solidarity does not extend to Muslims. Regardless of how accurate that opinion is, it is an indicator of the doubts that have taken root in the minds of some, and that is not a good thing.

And this is not the only loss that has come out of the Rohingya tragedy. The regime in Myanmar, which is perpetrating horrific violations every day, can still find allies who defend what it is doing. The Myanmar regime’s responsibility for the extermination of the Rohingya is clear and its statements denying what is happening are mendacious.

Sacrificing her past as a fighter for rights and freedom in order to embrace tyranny, Aung San Suu Kyi – leader of the Myanmar government and Nobel Peace Prize laureate – serves as a prime example of the damage that can befall someone we thought would keep her principles no matter what.

It is truly tragic that Aung San Suu Kyi is defying reality and denying with confidence the violence and ethnic cleansing, to an extent that Amnesty International has classified her affirmations as “a mix of untruths and victim blaming“. Aung San Suu Kyi could have fought and won a victory for human rights or for her own conscience at the very least. But she preferred to fight for her “nation” and its military vision built on exclusion, marginalisation and rejection of diversity. What a tragic end for a woman who so many counted on.

The Rohingya tragedy has confirmed what we’ve said about the use of “terrorism” by dictatorships as a useful excuse to realise political goals and destroy opposition or political opponents.

The world has seen how entire villages are destroyed and their inhabitants killed or displaced, all atrocities committed in the name of the “war on terror”; who can accept these justifications? I would think no one.

The truth is that using “terrorism” as an excuse to suppress opponents and to enable tyrannical political leadership to strengthen its bases is an old ruse that everyone can see through. The UN and international community have to be brave and prevent the use of “terrorism” in this way.

Authoritarian regimes must be deprived of the opportunity to use a just cause such as fighting “terrorism” for their own ends. Not only that, but there must also be a real accounting of those who have perpetrated human rights violations for any reason.

There are numerous calls to end the military operations against the Rohingya today. This can be seen as a positive development, and although it comes very late – better late than never.

In spite of that fact, the regime in Myanmar likely will not respond to these calls unless there is a unified international stance against the crimes against humanity that are being perpetrated there. The military in Myanmar are still the ones who call the shots, and they don’t see anything wrong with denying the Rohingya their rights.

The Rohingya tragedy has shown how a UN member state can have an internal policy built on racial and religious discrimination without any international consequences. Therefore pressure must be increased on the regime in Myanmar if we are to see real course correction.

It is time to take a firm stance on Myanmar. We should not pacify a state promoting apartheid policies. It is time to stop a human tragedy that has persisted for decades.

A few days ago, Bangladesh and Myanmar reached an agreement that allows the repatriation of Rohingya refugees, who were subjected to a campaign of persecution and forcible displacement by the Myanmar army only two months ago. But this agreement, even if implemented, is not enough to go on as if nothing happened.

It is true that the repatriation of the Muslim-majority Rohingya is very important to put an end to this tragedy, but what guarantees will the Myanmar government provide for not repeating its ethnic cleansing campaign?

Nevertheless, this agreement should be a prelude to the end of abhorrent discrimination against the Rohingya who should be given political and civil rights as citizens of Myanmar.

The Rohingya have lived for a long time without knowing the true meaning of humanity and justice. Would it not be wonderful if they could find some of that now? We must work to realise that with all our strength, not just for them, but for all of us.

Tawakkol Karman, a co-recipient of the 2011 Nobel Peace Prize, is a Yemeni journalist and human rights activist.