Call Me by Your Name: Academy Award-winning Film from Luca Guadagnino

Directed by Luca Guadagnino from a screenplay by James Ivory, based on the novel by André Acima.

(Movie Soundtrack, ‘Mystery of Love,’ HERE on Music Video of the Week)

19 Mar 2018 – Call Me by Your Name, directed by Luca Guadagnino from a screenplay by veteran writer-director James Ivory, was one of the more highly regarded films of the past year. It received Academy Award nominations in the categories of Best Picture and Best Actor and won the Oscar for Best Adapted Screenplay. While the film may have been among the more humanistic works nominated, it is also a strangely unsatisfying work. 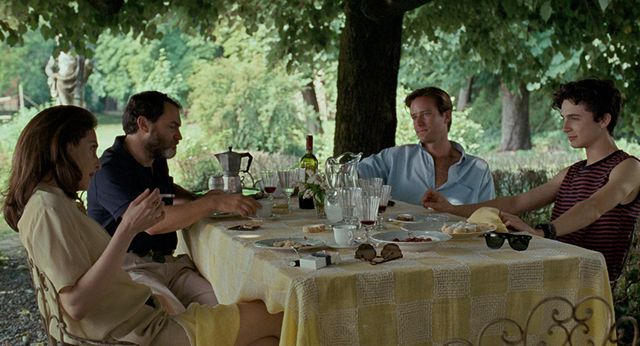 Call Me by Your Name

Guadagnino’s drama opens in the summer of 1983. Elio Perlman (Timothée Chalamet) is the teenage son of a middle class Jewish family living in a beautiful villa in northern Italy. He is sensitive and bookish, spending much of his time reading and transcribing music. By the end of the film, he will have had his first sexual experiences with both a man and a woman.

Elio’s father (Michael Stuhlbarg) is an American academic conducting archaeological research in the area. His mother (Amira Casar) is Italian and French, and Elio and his family float effortlessly from one language to another when talking with friends and guests.

The family await the arrival of Oliver (Armie Hammer), an American graduate student who will spend the next six weeks assisting Elio’s father in his research. Elio is annoyed that he must give up his bedroom to the young man.

When the handsome Oliver arrives, he makes a strong impression. He drinks and eats vigorously and stalks around with great confidence. He is charismatic but also a little rude. Elio watches him, intrigued but unsure. He “complains” to his parents about the young man’s arrogance, in the way one does when one becomes interested in someone but tries to convince oneself or others that the opposite is the case.

It takes some time for Elio and Oliver to warm up to one another. They go out with young women in the town, leading mostly separate social lives, but they eventually gravitate toward each other. Once they get past their initial reservations and awkwardness, they fall in love and begin a passionate affair. They become so close they begin calling each other by the other’s name. Despite the depth of their feelings, the relationship almost inevitably ends in the way summer romances so often do.

Call Me by Your Name is beautifully photographed. The performances are generally very good. It boasts an Academy Award-winning script. Why, then, does the whole thing feel so flat?

Call Me by Your Name is a kind of fantasy. The film is set in Italy in 1983, an explosive period in that country’s history, but it actually exists outside of time and space. Change the time period and move the family to another location, and it would not affect the story in the slightest. There is no sense of necessity in the filmmakers’ choice of setting.

At the heart of the film is a family of academics, who, we are led to believe, live the cultivated lives of intellectuals. There is little evidence of this on the screen. The family has remarkably little to say about the times in which they live. They are not creatures of substance; they are phantoms.

We have by now seen many of these coming-of-age films in which middle-class youth experience their first loves, often at expensive European vacation homes. French filmmaker Eric Rohmer made a career in part out of them (he also had other concerns, to be fair). Like so many of these movies, Call Me by Your Name is just a little too idyllic for its own good. Everything is too beautiful, and everyone is too understanding. No one experiences any real consequences for their actions. A girl with whom Elio begins a relationship but quickly abandons for Oliver is perfectly forgiving of the young man.

Most improbable is the reaction of Elio’s father to the realization that his son is gay, and that the 17-year-old has begun a relationship with the 24-year-old grad student who has come to assist him. Elio’s father delivers a widely praised monologue in which he calmly expresses his thorough approval and understanding of his son’s sexuality and his relationship with Oliver, and consoles his son once it has ended. The speech is so understanding that it was probably intended by the filmmakers to model behavior for the parents of gay youth.

But, given social realities, might the father not have been even a little concerned, or perhaps surprised? Would he not have anything critical to say of a man who had come to work with him instead becoming romantically involved with his teenage son? The father need not have responded with hostility to his son’s homosexuality, but as it stands, his speech is something out of identity politics Heaven, not real life.

Call Me by Your Name has been celebrated by some commentators for having presented a homosexual romance as completely normal and for not shying away from eroticism in its depiction of Elio and Oliver’s love affair. Indeed, the whole thing is utterly normal. One is tempted to say “banal.”

Unfortunately, insulated and sentimental love stories about middle class gay couples are no more interesting or engaging as a rule than the same films about heterosexual couples. Even deeply personal films about love or the transition from adolescence to adulthood must take place in the real world and take a more critical look at their characters.

Compare this film to superior works from an earlier period, like Valerio Zurlini’s Girl with a Suitcase (1961), about a teenage boy who falls for an older, working-class woman, or Vittorio de Sica’s The Garden of the Finzi-Continis (1970), about a group of affluent youth in northern Italy whose well-to-do lives cannot shelter them from war, anti-Semitism and all the horrors of the 20th century. Both of these films have a strong sense of time and place. Their characters live in the recognizably real world, and their contradictions and complexities are brought out by the filmmakers. This is what is so seriously lacking in Call Me by Your Name. 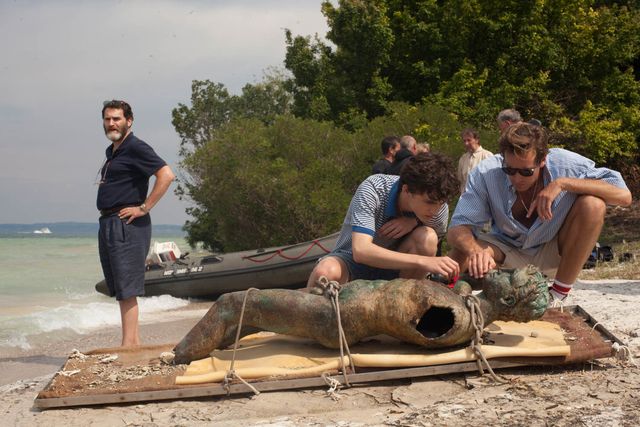 Call Me by Your Name

Others have criticized the film because of the age gap between Elio and Oliver. An opinion piece by Cheyenne Montgomery published in the Boston Globe went so far as to call it “a dishonest, dangerous film.” Montgomery writes that, “It falsely romanticizes an exploitative relationship between a grown man and a teenager.”

The columnist misinterprets the last scene, a long close-up of Elio shedding tears of sorrow and joy as he remembers his time with Oliver, describing it as the start of a lifelong breakdown. She writes, “The film ends with Elio crying. Oliver has moved on. His life continues without consequence. But as experts on this type of abuse will tell you, Elio is at the very beginning of a long struggle with the misery and the challenges that survivors inevitably face. A real-life Elio would most likely suffer from depression and perhaps even become suicidal.”

One only has to see the film to understand the absurdity and empty-headedness of Montgomery’s mischaracterization of it and the relationship between Elio and Oliver. Given the sexual puritanism now being promoted in response to recent Hollywood sex scandals, it was almost inevitable that Call Me by Your Name should be attacked in this way.

Guadagnino (I am Love, A Bigger Splash) legitimately defended the film in an interview with the Washington Post, explaining, “Call Me by Your Name is about consensual desire, discovery and a completely un-power-related relationship.”

Sing Street from Ireland, A Bigger Splash from Italy: Neglected Realities – [28 May 2016]